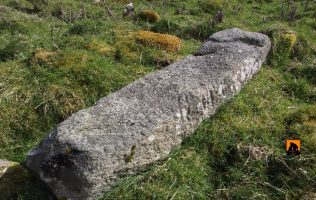 Ogham was a writing method used by ancients to inscribe the Irish & Pictish languages on stone monuments.  Possibly begun during the fourth to seventh centuries however several scholars believe they dated at least to 100 AD.  Ogham script consisted of lines & notches incised on the stone’s edge.  Each line or notch, or indeed a series of lines & notches represented different letters of the alphabet.  Usually it is read from the bottom upwards. [i]

Kilgarvan Ogham Stone was discovered by a group that included Noel O ‘Neill & Gerry Bracken on Good Friday 2000 out on a day’s fieldwork.  It is a short pillar: wedge-shaped in sections composed of granite.  It is 1.4 in length, 0.3 in width also 0.2 in depth.  It has been inscribed with a single name ‘DOTAGNI.’   This stone has been dated by Moore to perhaps 400 – 599 AD.  The graveyard where it lies is in the barony of Gallan where the Gailenga tribe frequented.  One of the major tribes in the vicinity until the rise of Connachta during the sixth century.  It is possible that the stone commemorates a Gailenga chieftain.  Coordinates are 54 5 23.084 N,  9 1 40.43 W. [ii]

This Kilgarvan Ogham Stone was discovered by Mayo Historical & Archaeological Society Members on Good Friday 2000. It was lying on its side in Kilgarvan graveyard adjacent to where an old church had once been located within the parish of Bonniconlon, Co. Mayo. According to local tradition the church had been founded by St. Feichin of Fore from Levney in Co. Sligo during the seventh century. [iii]

Images of several ogham stones may be viewed at this site: http://www.megalithicireland.com/Ogham%20Stones%20Page%201.htm