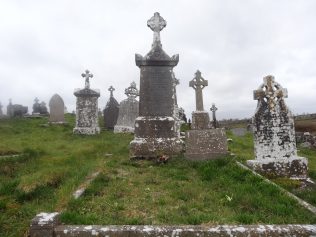 Knox described churches of that era as ‘typical, whether Romanesque as original.  They differ a little in proportion of length and breath, but the arrangements of doors and windows are, in substance, the same. The east window is generally very narrow, but sometimes large and even double.  In the south wall is another narrow and splayed window close to the east wall and near the west end. This might be called a standard plan.’  (page 89 ) [i]

Donohue Tony 2011 in his article titled History of Churches and Ecclesiastical Sites in Addergoole penned the following: ‘The Church in Knockmaria is the earliest foundation in Addergoole,  it related to Errew Abbey. The Church was associated with St. Kieran or Ciaran, whose feast is 9th September who was believed to have Founded the Abbey.’ (Donohue Tony Carrick Print  page 89 ) [ii]

John O’Donovan examined the church during 1838 then discovered that ‘Addergoole church, in 19 yards long inside and 8 yards broad.  The east gable is nearly destroyed.  There is a small stone cross lying at it, on the inside, but a modern one.  0n the south wall near this gable is a breach: originally it was very likely a window.  There is an opening on the west gable, the form of which is concealed from the eye by a very thick coat of ivy which the gable wears.  The door on the south side-wall, near the west gable, being made of cut stones, is 8 by 31/2 broad.  He also referred to The Ordnance Survey Letters  that pattens were held with stations performed on various feast days i.e. St. Bridget, St Patrick, St. Muredach, SS. Peter & Paul.  [iii]

Fr. Lavelle stated that: ‘The east window and that in the south wall has now given place to shapeless breaches, but the door is intact.  A holy water stoup, hewn in a larger irregular stone, now lies near the lake’s edge on the eastern side of the old church, to which it evidently belonged.’   [iv]

Fr. Eddie Mc Hale stated that St. Kieran was a contemporary of St Tiernan, the founder of Errew Abbey during the first half of the century.  Re. Addergoole Abbey, he stated that ‘The small stone cross is no longer to be seen, the ivy on the west gable is gone, too, and the opening is clearly visible as a small narrow window.’  [v]

The ruined Addergoole Abbey with its extensive graveyard is located adjacent to Lough Conn Shores within Mayo. [vi]

Remains of an old abbey at Addergoole. (Topographical Dictionary of Ireland by Samuel Lewis 1837) [vii]

The Addergoole Abbey is situated on the shores of Lough Conn.  A Christian community occupied the abbey with an adjoining graveyard during centuries past. [viii]

Addergoole Abbey was referenced in an article in The Connaught Telegraph  3rd July 1833 titled Interesting Ceremony at the Abbey of Adrigole.  (pages 90-92 )  [ix]

[ix] Addergoole Its Land and People 2000