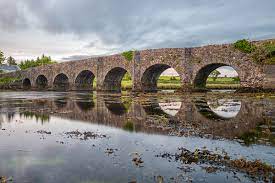 Burrishoole Bridge represented an important component of the eighteenth-century civil engineering heritage in Newport’s rural environs with the architectural value of the composition of the elegant ‘sweep’ of the Arches over the Burrishoole channel crossing in the shadow of Ben Gorm.  It comprised of a series of seven round arches with squared rubble stone voussoirs.  Constructed with unrefined local fieldstone.  Random rubble stone walls centred on triangular cutwaters to piers also covered rubble stone course coping to parapets. The bridge was extant during 1838.  This bridge was bypassed during 1950.  An image features on this site.  Registered number 31306714.  Coordinates are 96536, 296082.  (date recorded 17th November 2010) [i]

Burrishoole Bridge is one of the most peculiar bridges within Mayo.  This seven-arches bridge was constructed during the eighteenth century when the road between Newport & Mulranny was erected to allow people to cross the Burrishoole Channel.  The form & materials perfectly blended with the landscape.  Since the 1950’s the road was re-routed that resulted in less traffic. [ii]

The Burrishoole Bridge was constructed during the eighteenth century as part of the roadway between Newport with Mulranny.  This seven-arched bridge crossed over the Burrishoole Channel. (The railway line from Mulrany to Achill was in operation from the 1880’s until 1939 & crossed a bridge along the route)  This bridge was widened further downstream during 1950 for the accommodation of road traffic.  It replaced the old Burrishoole Bridge route.  The high level of salt in the atmosphere eroded the steel of the former railway bridge by the 1990’s. The bridge’s deck was replaced by Mayo County Council during 1998.  An image by John D. Clarke features on this site. [iii]

Information with a satellite map included re Burrishoole may be viewed at this site: http://burrishoole.marine.ie/Burrishoole.aspx

An image by Robert French from the Lawrence Collection may be viewed at this link: http://catalogue.nli.ie/Record/vtls000325844

A photograph by Colin Parke features on this link: https://www.geograph.ie/photo/5220660