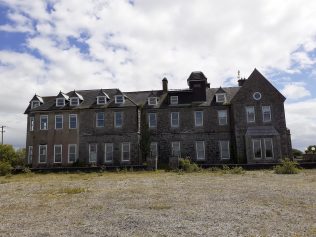 Errew Country House was constructed for Granville Henry Knox (1840-94) to a design by James Franklin Fuller (1835-1924) of Great Brunswick Street Dublin.  The building represented an important component of the late nineteenth century domestic built heritage of County Mayo with the architectural value of the composition confirmed by such attributes as the deliberate alignment that maximized panoramic vistas to overlook Lough Conn with Mount Nephin as a dramatic backdrop.  It evoked comparisons with the Fuller-designed Mount Falcon (1871-80) in Ballina.  This was a detached six-bay two-storey country house with dormer attic constructed from 1872-1877 on an L-shaped plan that was off-centred on single-bay single-storey.  The structure was based on the multi-faceted plan form.  The robust rock faced surface finish was offset by sheer limestone dressings with a ponderous two – tone palette.  A flat-roofed porch had a single-bay two-storey gable & a projected end bay abutting single-bay at three-stage.  A south monolithic tower on a square plan was originally topped in the ‘Châteauesque’  style that resulted in a roofline as a prominent vista in the landscape. Elevations were erected on the north side of six-bay or south three-bay two-storey side.  A slight diminished scale of openings on each floor produced a feint graduated visual effect with the principal ‘apartments’  defined by polygonal bay windows.  It was nicknamed ‘Knox’s Folly’  owing to the proprietor’s bankruptcy during 1881.  During 1893 the building was adapted for alternative use.  This house was reduced to ruins during 1949 by a disastrous fire.  Reoccupied by 1901 it was sold in 1905.  By the year 1911 it was vacant once more.  From 1912-1917 it was in alternative use.  During 1949 a second fire occurred that rendered it vacant until 1976.  Errew House was partly restored during 1978 also during 1998 to 2000 the structure underwent yet another ‘restoration’  to accommodate a proposed alternated venture.  The elementary form with massing survives intact together with quantities of the original or replicated fabric.  Several images feature on this site. Registered number is 31303811.  Coordinates are 115732, 312326.  (Date recorded 17th February 2011)  [i]

Errew House was constructed by the Ormsby family from 1780-1790.  The family were originally Jacobite’s that were reinstated at the restoration then provided with grants of land in Ireland by King Charles 11.  Later it was leased to a Hercules Knox.  Purchased by William Flynn as a lakeside fishing hotel.  During 1912 the Jesus & Mary Order of nuns founded their first branch at Errew House at the request of Bishop Naughton.  The venture was pioneered by Mother Regis O’Connor also Mother Sebastian both nuns from Ireland, Mother Rasphael Musgrave from England, Mother Gonzaga of Austria also an Austrian cook Mother Bertha.  A French nun Mother Henrietta Baudowin joined the Convent during 1915. [ii]

An article titled Rare, Rare Chance to own a slice of Historic Mayo Home  was published in The Western People  regarding Errew house as a piece of which could now be yours to own.  It was designed by architect James Franklin Fuller.  (This architect designed Mount Falcon, Kylemore Abbey also he provided drawings for major extensions to Ashford Castle)  Errew Grange or Errew House was one of North Mayo’s most imposing historic properties.  This Victorian gothic house was constructed near Crossmolina during the 1870’s. Located high on a hill that overlooked Lough Conn in one direction with a full vista of Nephin mountain in the other.  The structure shared several of the exterior features of Mount Falcon in the style of architect Fuller especially the prominent corner tower.  Errew House has led a chequered life from first home to Granville Knox with  his wealthy heiress wife Ellen Farrer to a later experience of a school run by three sisters from a French order of nuns.  The house was transformed into the Lough Conn Hotel but unfortunately the interior was extensively damaged by fire during the 1940’s.  During 2000 the restored property with fourteen apartments was offered for sale in the region of £130,000 to £205,000, yet later one lot went up for auction with a guide price of just €20,000.  The vacant first floor two-bedroom apartment covered seven hundred & seventy-five square feet.  Several of the property’s original features i.e. sash windows & ceiling coving are retained.  Two images featured at this link. (The Western People 12th July 2020) [iii]

Errew House was a gothic Victorian structure constructed in the 1970’s in a location situated approximately five kilometres off the main Lahardane / Crossmolina road in North Mayo on Lough Conn’s shores.  Designed by James Franklin Fuller: who also designed Mount Falcon & Kylemore Abbey, it had an impressive view of Nephin Mountain also was known as Errew Grange.  The land was owned by Granville Henry Knox who had the house constructed with his family fortune’s but earned the nickname ‘Knox’s Folly’  due to his bankruptcy in 1881.  An order of French nuns leased the house for use as a school during 1912.  It was so successful a larger building was required with the result they moved to Gortnor Abbey.  Mary (Molly) Canavan opened a small hotel for fishermen who used Lough Conn.  During 1948 a fire followed a gas explosion with the premises destroyed.  The building was re-roofed during the 1970’s.  It was restored in the late 1990’s with conversion to fourteen apartments. [iv]

The architect of Errew Grange outside Crossmolina town was James Franklin Fuller who also designed Mount Falcon in Ballina with a similar prominent corner tower.  Other designs of his included Kylemore Abbey also extensions to Ashford Castle.  Granville Henry Knox was born in June 1840, son of James Annesley & Mary Mina Knox of Netley Park.  During July 1862 he married Ellen a daughter of Richard Frederick Farrer, she was a wealthy heiress that allowed Granville access her funds to establish himself.  He purchased lands at Errew from Charles O ‘Donnell.  By 1876 he owned one thousand, one hundred & eighty-two acres in County Mayo with one thousand, one hundred & twenty-eight acres in County Sligo.  Errew Grange was constructed during 1872 with a contract price of five thousand pounds. The Victorian Gothic house was constructed on a height with views of Lough Conn in one direction & a full view of Nephin Mountain on the other side.  No expense was speared; materials were brought from Dublin by rail to Ballina, then brought by horse & cart to Errew.  It was constructed with freestone in the interior, with cut limestone from County West Meath for five shillings a ton on the exterior of the structure.  Granville Knox’s extravagance with his numerous changes ensured the cost far exceeded the original estimate with an approximate cost of £10,000. Knox spent his wife’s fortune; he was declared bankrupt at the encumbered estates court prior to the completion of the grange with the term ‘‘Knox’s Folly’ attributed to the structure. The sheriff’s bailiff took control of the property on 10thJuly 1886.  (Knox emigrated to Nova Scotia prior to his family’s journey to join him, his demise occurred in 1894)   During May 1891 Maurice J. Fitzgerald proposed to rent Errew Grange for fifty-five pounds  a year from the land court to convert it into the Lough Conn hotel.  On 29th November 1895 Fitzgerald was declared bankrupt.  In the 1901 census he was still in possession along with his wife Joan, daughters Alice & Geraldine with four servants.  The house was listed with twenty-five rooms, fifteen windows across its front also four outbuildings.  Following a 1905 court case the property was awarded to Paget Bourke at a cost of three thousand pounds.  By the time of the 1911 census the building was listed (with a tenant John Watters) as owned by Harry Bourke, a solicitor based in Ballina who was son of Paget Bourke.  A French order of nuns arrived in Mayo during 1912, they leased Errew Grange from H. C. Bourke for a school.  Several members of their order later arrived: they opened the school in November that year with twelve (day) pupils also four boarders.  Due to an overload of students they moved to Gortnor Abbey in 1916.  Next occupant was Mary (Molly) Canavan who ran an hotel business for fishermen until 1948 when a servant Michael Gibbons inspected a gas leak with a match.  The house was destroyed within hours.  (On 25th September 1948 The Western People  reported a fire with an article Mayo Mansion goes up in flames with an image)  The land was divided by the Land Commission in later years: a local family became owners of the wrecked building.  From January 1978 they restored the house.  By November 1997 permission was sought to convert Errew Grange into apartments with a full restoration of the interior.  During 2000 fourteen luxury apartments were offered for sale at a cost of £130,000 to £205,000.  Several dormer windows in its attic story in fact distract from the original beauty of the Fuller structure.  Several images feature on this blog (20th July 2014) that included the following by David Hicks: a beautiful stained-glass fanlight over the entrance to Errew Grange, one of the original Mount Falcon drawings is signed by the architect Fuller.  His original architectural drawings are now displayed in The Mount Falcon Hotel bar at Ballina.[v]

Errew Grange in County Mayo was designed during the early 1870’s by James Franklin Fuller for Granville Knox following the latter’s marriage to heiress Ellen Farrer.  The structure was close to Lough Conn shores.  During the mid-eighteen hundred century Knox was declared bankrupt as their resources were inadequate due to his extravagance of materials with the house seized by bailiffs.  They were believed to have emigrated to Nova Scotia.  The house underwent various changes as an hotel also a convent school.  The building was destroyed by a fire during 1949.  During the 2000’s it was converted into luxury apartments but it is now vacant. [vi]

With Greville Knox’s marriage to heiress Ellen Farran: he was in a position to purchase property also land in County Mayo.  By the year 1876 he was owner of one thousand, one hundred & eighty-two acres in Mayo also one thousand, one hundred & twenty-eight acres in County Sligo.  His large Errew Grange was known as ‘Knox’s Folly’ due to his extravagance. He emigrated to Nova Scotia.  The building was sold, later leased to the Order of Jesus & Mary religious prior to the order’s transfer to Gortnor Abbey during 1916.  An hotel was the next venture of the building until a it was destroyed by fire during 1949.  Several years later it was converted to luxury apartments. [vii]

In an article The Irish Times  titled Apartments in a mansion published the following information that: Errew House is 1.5 miles from the village of Laherdane with Ballina ten miles with Castlebar twenty miles away.  Errew House was a nineteenth century three-story mansion  located on a 2. 5-acre site with landscaped gardens & direct access to the shores of Lough Conn in Co Mayo had been converted into fourteen luxury apartments for sale from £130,000 through Young’s auctioneers in Dublin.  A south-facing tower had been incorporated into one of the penthouses.  The apartments range in size from 500 to 1,200 sq. ft.  There were seven one-bedroom units priced at £130,000, four two-bedroom apartments at £170,000 also three penthouses, each consisted of three bedrooms for £205,000.  All apartments had internet connections & were wired for digital television.  During the conversion of the premises several of the original features i.e. Victorian-styled tiling in bathrooms, en-suites also hallways together with high skirting boards & plaster plaques were retained.  Errew House was originally constructed during 1870 to a commission by Granville Henry Knox. It has had a colourful history.  Designed by architect J. F. Fuller who had Mount Falcon Hotel in Ballina &  Ashford Castle in Cong to his credit.  The house was in situ as a fishing hotel from 1920-1948. (24th August 2000)  [viii]