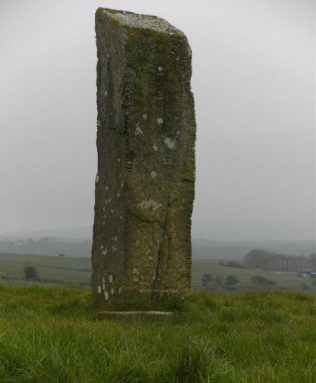 This megalithic Ogham Stone is perhaps one of the most well-known standing stones within Ireland.  It was believed to have been erected as a pillar-stone during the Bronze Age.  Ziegler dated it to 550-900 AD.  An ogham epithet was inscribed as an additional feature in later centuries.  This stone measures 3.66 metres in height with a width of 0.76 metres with a depth of 0.60 metres.   Two angles of its southern face were the positions used for inscription.  The Inscription has been damaged by spalling at its beginning.  Translation is ‘Leggio – – Sadiulenges – Q – – Mac Corrbri -Maq – Ammolratta.’   Coordinates are 54 14 47.453 N, 9 15 13.275 W.  This site features a sketch also a  photo of the stone.  [i]

The former Ailandruadh or ‘Druid’s Stone Pillar’  is an outstanding example of a square sectioned standing stone.  It measured 3.5 metres in height.  It was possibly erected during the Bronze Age.  Its Inscription was chiselled circa 600-900 AD.  Following several centuries, it was re-erected during 1853 by members of the Royal Irish Academy.  The visible markings consist of ‘LGG….SD. LEESIA’ with the other side marked by ‘MAQCORBBRIMAQAMLOITT.’  Nineteenth centaury antiquarian John O’ Donovan believed this Breastagh Stone was an authentic place where a man of rank: one descended from royalty namely Amhalgaigh who was the grandson of the fifth century King of Connaught.  He dated the carving to the first half of the sixth century.  ‘On the roadside there is the finest pillar-stone, perhaps in Ireland, with Ogham inscription, indicating the burial-place ‘of the son of Carbry, the son of Awley’.  This stone was put standing (re-set in 1853) some fifty-five years ago, by the late Sir Samual Ferguson.’  (Journal R. S. A. I. Vol V111., PT.111 15th September 1888) [ii]

This ogham stone was discovered by Englishman W. K. Dover lying in a field during April 1876.  The site suggested a pre-historic standing stone that was later inscribed with Ogham letters.  It stood 3.36 metres by 0.76 metres by 0.60 metres by McAlister in (1945)  He also suggested that Tirawley where the standing stone is located; referenced the fifth century local King Amolgaid who had a son Coirpre also that the stone was a memorial to family.  A large flake had gone from the B-surface of the injured angle, a L was left-followed by a vowel possibly an E.  After the B-haves of two G’s a fracture occurred.  There was a row of perfect letters that ran to top of stone.  The remainder of Inscription was clear with the final D as the last letter. (Macalister 1935 pages 13 / 14)   Further he observed that the top third of stone was heavily covered in lichen so much of the inscription after the LL of the second person’s name was obscured.  There appeared to be a fracture between the LL & final T. (McManus 1986 page 22)  Mac Neill (1909 page 332) identified the name as Amlongaid the King of Connaught who died circa 440-450.  McManus (1991 pages 53 & 96 / 97) differed with that date, as he suggested perhaps it was late sixth or early seventh century.  Several images feature on this page. [iii]

Breastagh ogham stone or Cloch oghaim bhréisteach is a national monument 4.2 kilometres north northwest of Killala.  It was believed to have been erected during the Bronze Age with the ogham Inscription added between 600-900 AD.  It was brought to Sir Samual Fergusan’s attention when discovered by Englishman W. K. Dover during April 1874 lying in a field.  It measured three hundred & sixty-six centimetres by seventy-six centimetres  by sixty centimetres.  It had carvings incised on two edges.  The translation referred to ‘Legescad, son of Corrbrias, son of Ammllogitt.’  He was believed to have been the grandson of Amhlgaid (d 440 ) Mac Fiachre King of Connaught of Ui  Tirawley also to an earlier Túath Tir Amlaidh. [v]

Breastagh ogham stone is referenced on this site: https://www.facebook.com/

An image of Breastagh ogham stone may be viewed on this link: https://www.flickr.com/photos/nlireland/8484298783

An image of Breastagh ogham stone  may be viewed at this site: http://www.carrowkeel.com/sites/ceidefields/kilalla.html