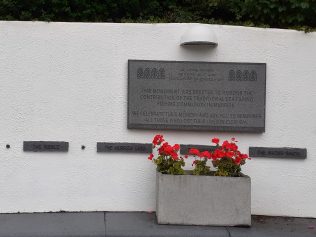 This tribute to Murrisk Fishermen was erected by Murrisk Development Association Ltd.  It was officially unveiled on 1st August 2006.  It is situated 46.79 N, 9 37.474 W at Murrisk in County Mayo.  Memorial is approximately one hundred & eight meters north of the R335 just immediately north of the bridge across Clew Bay Estuary.  The names of  twenty-three boats associated with sea fishing in the Murrisk area up to mid – 1960’s are listed on the memorial.  this site.

Part of the inscription on the monument includes these lines:

When business was booming during the 1930’s & 1940’s an Ice Plant was set up in 1943 by Bord Iascaigh Mhara to supply ice to the local fishing fleet.  At the arrival of the fleet at Murrisk pier with their catch: the ice was awaiting them.  It had originally been transported by horse & cart from the Ice Plant on the news that the boats arrival were imminent.  This project acknowledged the fact that Murrisk was a traditional fishing village up to the mid 1960’s approximately.  Fisherman’s Memorial was constructed also funded by Murrisk Development Association Ltd in 2006.  Name plaques along the memorial wall reference the names of the fishing boats that fished out of Murrisk at the time.  Murrisk Fisherman’s Museum is located at Murrisk cafė at the base of Croagh Patrick.  This acknowledgement pays remembrance to the spirits of the fishermen: ‘We believe that it is important to remember our past as we live in the present and look forward to the future.’  [ii]

Several boats & trawlers that worked from the pier until the 1970’s are commemorated in the Fishermen’s Memorial at the end of the barrier constructed by the Murrisk Development Association in 2004 / 2005.  Monument was erected to honour the contributions of this traditional seafaring fishing community.  It is a place of peace & reflection where people may pay tribute to all those who worked on the boats that fished out of Murrisk.  [iii]

In an article titled Delving into Murrisk’s hidden history’ one may read that there is a Fishermen’s’ Memorial to those village men lost at sea.  Brian Hoban historian published an interesting account of Murrisk’s once thriving fishing industry that reached its heights following the construction of the pier during the 1890’s by the Congested Districts Board until its decline in the 1930’s.  The expertise of the herring fleet provided an income for households which few coastal villages could match.  There were also the prosperous oyster storage ponds where the produce was kept on hold prior to its export to Scotland etc that are still visible.  Murrisk fishermen were admired as skilled courageous mariners.  He recounted the tale of Austin Burke: a most intrepid Murrisk fishermen whose daring seamanship during 1947 made headlines around the world.  He departed from his home village on a calm day during May to sail to Arklow but his small fishing boat the ‘Myra’  ran into unexpected seas. The vessel was driven a hundred miles out into the Atlantic.  With  its fuel supply exhausted the ‘Myra’  was tossed about adrift on the ocean for three weeks without contact with land or other craft.  All hope was lost word: finally word reached Murrisk that Austin Burke with his crew of two had been miraculously saved by a Scottish trawler also that  they had landed safely at Oban in Argyll,  Scotland.  (The Mayo News 11th September 2014)  [iv]

A section on the main road takes in the old Fishing Harbour &  Fishermen’s Memorial on this walking loop: https://www.sportireland.ie/outdoors/walking/trails/murrisk-pier-loop

Murrisk Fishermen’s Memorial is referenced on these sites: https://www.mypacer.com/routes/77726/murrisk-loop-walk-road-croaghpatrick-county-mayo-ireland