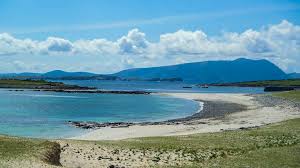 These islands are located west of the Co. Mayo Coast: five kilometres from the Mullet Peninsula.  Called Inis Gé i.e. or Goose Island, they lie between Inishglora to their north with Duvillaun to their south.  Theses islands are the sites of numerous archaeological monastic sites.  During the early Christian era St. Brendan & St. Columba founded monasteries on the islands: of these three settlements remains visible.  On Inishskea North Island are three mounds known locally as The Baileys i.e. Bailey Mó, Bailey Beag also Bailey Dóighte. archaeologists discovered ruins of beehive huts that had been in use by the early Christian monks.  Remains of megalithic tombs from the Neolithic era circa 3500-2000 BC may be viewed.  French archaeologist François Henry discovered during 1946 traces of a dye workshop.  It was possible that the monks produced purple colour from the shells of dog whelps.  Cross slabs date from the late seventh century AD to eighth century AD.  Remains of a small church dedicated to St. Columba is situated on the South west of the island.  It was constructed circa 540 AD.  On Inishkea South Island cross slabs & pillars were discovered.  To the north of the Harbour one stone has a cross inscribed on it that is located within the centre of two stone circles.   It was possibly a pre-Christian monument that was ‘Christianized’  later.  During the nineteenth century the islanders revered a shaped rugger ball called ‘Godstone ’ or ‘Naomhóg ’  according to tradition had been St Columba’s ‘Pillow. ’ It was believed to have the power for calming water, quelling fire or speeding the growth of potatoes. [i]

Inishkea North Island is known as an early Christian monastery that flourished during the sixth to tenth centuries.  Baileys are large dunes located on the east side of the Island.  A large excavation of the Bailey Mór revealed the ruins of several buildings.  Among the cross-slabs on the mound is one unusual stylized crucifixion slab.  The other slabs may date to seventh or eight century AD.  There are possible remains of several megalithic tombs; built during the Neolithic era (c.3500-c.2500 ) along the north-east coast of the island.  In total there are fifteen to twenty slabs.  A small church dedicated to St. Colmcille is situated on the south -west of the island.  It is dated to the early Christian era.  Evidence unearthed that purple ink was produced to the illuminate manuscripts by the monks; the ink was exported to various monastic sites.  On Inishkea South Island monuments included cross-slabs with pillars.  Towards the north of the Harbour is a stone with a cross inscription located within a circle of stones.  It was believed that this pre-Christian monument was later ‘Christianized.’  [ii]

Archaeological excavations revealed that evidence pointed to early monastic sites. Near to the Harbour was a burial ground with an early Celtic design.  One may view evidence of the Church of St. Colmcille on Inishkea North.  Archaeologist & scholar François Henry (1909-1982 ) revealed that the settlement of the islands dated back to the sixth century.  William Hamiliton Maxwell referred to his visit in his publication Wild Sports of the West 1832.  One may view Maxwell’s account at this site. [iii]

Evidence of inhabitation on the islands from the megalithic era is contained within article. (Edwin Mc Greal 2nd August 2016) [v]

St. Columcille established a church on the North Island circa eight century.  The island got its name from Inish Gé or Goose Island due to the barnacle geese that visit from April to October annually.  [vi]

Inishkea North is known for the ruins of St. Colmcille’s Church also the mounds called The Baileys i.e. Bailey Mó, Bailey Beag also Bailey Dóite.  On the South Island are the ruins of a small ancient church also a tall inscribed cross slab.  Monks on the islands produced an expensive purple dye from shells during the sixth to tenth centuries.  Islanders possessed an idol godstone or ‘Naomóg ’ that had supernatural power to calm seas etc.  The idol was housed in a hut on the South Island, dressed in new home spun flannel annually until destroyed by locale curate Rev. Fr. O ‘Reilly during 1890’s.  A photo by Seán Mulloy may be viewed on this site. (Pól Ó Conghaile & Seán Molloy 18th July 2019) [vii]

The Inishkea Islands are situated off the Mullet Peninsula off Ireland’s west coast; it was known as St. Kay’s Islands or Inis Gé.  Pagan religion was practiced during the nineteenth century on both Islands.  Evangelist Protestant Robert Joceyln mentioned during 1851 the unusual practice of the inhabitants in worship.  There are numerous archaeological or early Christian monastic sites dated to the Neolithic period on these islands.  Archaeologist François Henry excavated sites during the 1930’s & the 1950’s.  During 1940 Terence Hanbury White visited: he learned of the idol ‘Neevougi.’  Otway referred to that idol as masculine whilst according to Joceyln it was feminine.  North Island ruins includes St. Colmcille’s Church & three Baileys, on North Island the main discovery was a tall, inscribed cross. [viii]

Seven miles from Bingham Castle in the Atlantic lie the Iniskea Islands.  Within the house of a man called Monigan on the South Island was a stone god known as ‘Nervougi.’   Martin Martin believed that the Naveen or ‘Neevoge‘ may have represented the same pagan character as ‘Shoney’ in his publication A Description of the Western Islands of Scotland 1695.  The Knaveen is ‘a stone image of the rudest construction attired in an undyed flannel dress which is every year renewed.’   It resembled a thick roll of home-spun flannel that had been stitched & cared for by an old woman.  ‘When a storm arose, this heathen God is supplicated to send wrecks to their coast,’ John Francis Cambell Islay folklorist & Gaelicist. During 1841 Caesar Otway’s Sketches in Erris & Tyrawly   William Curry (Dublin & Longman London) stated that ‘Nevoge’ referred to the name Knaveen or Naomhin.  Islander Owen Mc Ginty reported ‘that the stone was small two or three pounds with a greenish colour in the shape & size of a smoothing iron wrapped in red cloth.’  (1st September 2013) [ix]

In Cathair na Mart Historical Journal  2010 no. 28 correspondence from a curate Michael O Donnell A O M titled The Iniskea Disaster  referred to the loss of ten fishermen at sea on 28th October 1927. (pages 93-96) [xii]

This site features a video of the islands: https://www.facebook.com/irelandofthewelcomes/videos/inishkea-islands-co-mayo/560005747945194/

David Mullen penned an article (page 75 ) with his series on Ireland’s Islands Part 8-The Inishkeas in the Ireland’s Own  St. Patrick’s Day annual 19th March 2021.

The Connaught Telegraph 18th May 2021 (page 2) featured an article on plans to remove Celtic stone from the Islands.  Six have already been removed to the National Museum.

An article by Adrian Weckler re. the Inishkea Islands monastic sites in Independent.ie on 13th August 2021 featured several beautiful images .