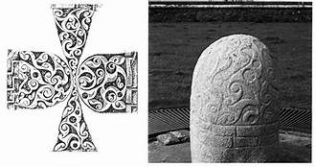 La Tène culture originated in the mid-fifth century B.C. with interactions between Greco & Etruscan civilizations with the Celts in Europe.  This continued until the fourth century as the culture passed through various locations or with Regional variants.  It ended in the mid first century when the Roman Empire from the south with the Germans from the north exerted pressure on the Celts. (Adam Agustyn) [i]

Three monuments in Ireland are known as La Tène Stones.  They are situated in counties Cavan. Galway also Roscommon.  Named after the area in Switzerland in which the artistic boulders & artefacts were discovered when water levels dropped during 1857.  They have been referred to as ‘cult stones.’  Kenneth Hurlstone Jackstone observed that the ‘La Tène’ style influenced the Illuminations within the early-Christian manuscripts i.e. the Book of Kells.  They featured the same trumpet pattern designs in several of their colourful pages.  Kenneth Hurlstone Jackson penned that ‘The (La Tène ) motif must have passed in Ireland from pre-Christian to Christian art at a single leap in its full vigour…if so, it is surly also not surprising that some of the literary tradition belonging to the Iron Age in Ireland should have lasted long enough to be adopted into the written literature of this very same early Christian period.’   Hutton  Ronald states in The Pagan Religion of the British Isles: Their Nature & Legacy that ‘To the prehistorian, these stones are a classic case of a piece of jigsaw with no getting into which it can confidently be fitted.’  [ii]

European Iron Age culture developed from 450 BCE to the Roman conquest of the first century BCE.  Barry Cunniffe noted that localization of ‘La Tène ’ during the fifth century when two zones of power & innovation: a Marne-Mozelle zone in the west traded with Po Valley via the Central Alpine passes & the Golasecca Culture also a bohemian zone in the east with separate links to the Adriatic via eastern routes & the Venetic culture. (Cunniffe 1977  page 66)  From their homeland the ‘La Tène’  culture expanded in the fourth century BCE to western Europe.  In later years they reached Britain & Ireland.  There were local differences in style also characteristics of curving ‘swirly ’ decorations.  The early ‘La Tène’  style of culture featured static, geometric decoration, while the transition to the developed style constituted a shift to movement-based form such as Triskels. [iii]

The granite boulder known as the Castlestrange Stone displays the characteristic curvilinear ornamentation of Celtic flourishes that were called ‘La Tène.’   They dated from the Iron Age period 400 B.C.-100 C.E.  It was 1904 before reports of this discovery were  published: ‘There are no remains near it with which it can be associated…No traditions are attached to it.  I could learn nothing about it, save that it had been present as long as the oldest people remembered.’   Castlestrange stone is all that remains of the Castlestrange Estate (dated from 1930’s) that included a three-story country house with a coach house, a gate house also stables in Athleague, Co. Roscommon.  Stone is sixty metres in height.  It is ninety centimetres  in length.  Designs are incised rather than carved in relief.  (One may view the virtual-reality rotating image on this page) [iv]

The other two ‘La Tène’ Stones within Ireland display the same continental style.  The Turoe Stone in Co. Galway is known for the beauty of its design carved in relief.  It was protected within a shed during the years of 2011, (?)  Local residents objected to the proposal to remove it from Co. Galway. The second stone was the Killycluggin Stone: it was damaged during the years.  Several pieces are now displayed in Cavan County Museum. [v]

In Castlestrange Demesne the beautiful inscribed cut stone is dated from 200 B. C. &  may be viewed there.  Decorated with curvilinear ornamentation in the Celtic ‘La Tène’  style.  This website features an area map. [vi]

Turoe stone is a national monument (no 327) granite sculpture in a ‘La Tène’ style.  It is located in the village of Bullaun in Co. Galway. (it is six kilometres  north of Loughrea off the R350) It possibly dated to 100 B.C.-100 AD.  It was removed from its original spot three kilometres from Bullaun during the late nineteenth century.  The Turoe stone is now positioned within a covered structure in the front of Turoe House.  It is set in a concrete base. The top of the stone is covered with a continuous abstract curvilinear ‘La Tène’  design. According to Georg Coffey 1904 in his paper to the Royal Irish Academy during 1840 he referenced the intended removal from the Feerwore site.  During 2007 it was proposed to move the stone: it was deferred due to local opposition. [vii]

Killycluggin Stone was discovered damaged in Co. Cavan.  It is a rough cone=shaped sculpture  believed to have been from the Bronze Age.  Speculation suggested that Killycluggin stone was a representation of the cult image of the pre-Christian god ‘Crom Cruach.’   François Henry stated in her Irish Art in the Early Christian Period (page 11) that ‘the ornaments engraved on the stone of the sides seems to be the edge of a garment.’   An imperfect replica was constructed circa three hundred metres from the original site beside the main road.  [viii]

This site has a list of ‘La Tène’ sites: https://en.wikipedia.org/wiki/La_T%C3%A8ne_culture

The following publications refer to topic:

Ó ‘Riordaín Seán P. Fragments of Killycluggin Stone  1952 in Journal of the Royal Society of Antiquarians of Ireland  vol 82 no 1 (page 68 ) be viewed or downloaded at this link: https://www.jstor.org/stable/i25510799

Rafferty Barry Excavations at Killycluggin Co. Cavan  1978 Ulster Journal of Archaeology third series (page 49-54) This may be viewed or downloaded at this link: https://www.jstor.org/stable/20567806

This site includes a list of publications that refer to ‘La Tène’ art & Celtic era: https://nemetondumnonantu.home.blog/resources/