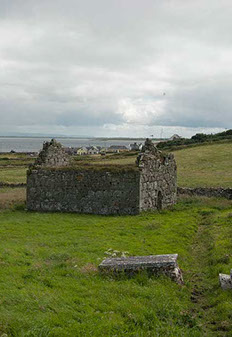 A legend narrated by Michael Mac Ruaidhri of Ballycastle, Co. Mayo was a confused reminiscence of Crom Cruac.  Prior to St. Patrick’s time in Ireland lived a chieftain in the lower country of Co. Mayo known as Crom Dubh.  He lived beside the sea: now known as Dun Patrick or Downpatrick.  The site of his house was called Dun Briste or Broken Fort.  Crom Lower means ‘Northern’  around the Lagan, Creevagh also Ballycastle areas.  According to O ‘Looney ‘Domnach Lunasa’  or ‘Lammas Sunday’  Domnach Crom was anglicised as Garland Sunday.  The first Sunday of August known as first fruits’ day was a great day on Buaile-na-Greine.  ‘I saw blossoms and flowers deposited upon it on the first Sunday of August, 1844, and put some upon it myself, as I saw done by those who were with me.’ (O ‘Looney)  That day of pattern or patron was known locally once as ‘Domnach Crom Dubh’ or ‘Crom Dubh’s Sunday’ also ‘The Sunday of the Black Stooped One.’  [i]

Crom Dubh was a fearsome pagan deity synonymous with the mythological deviant ‘Balor of the Evil Eye’.   Located a few short miles north of Breastagh is the historic Kilcummi village; named for the church of Cuimín who was a local folk-saint: it is now anglicized as ‘Cummin.’ The Book of Lecan  referenced the saint as ‘Cuimín Fada‘ or tall or long Cummin.  It was believed that St. Cummin was a descendant of Conaing son of Fergus thus a relative of the illustrious fifth – century King ‘Awley’ or Amhalghaidh Mac Fiachrach.  He was regarded as a wise man, a holy person & a fair arbitrator during  disputes.  He lived for a time at Iona during the seventh century.  A particular legend is beautifully depicted within a stained glass window over the main entrance to St. Patrick’s catholic church at nearby Lacken.  The ruins of an early stone church attributed to Cummin were constructed on an earlier religious site. Dated by the Ordnance Survey Letters to a period not so late, even as the eight century.  The Royal Society of Antiquities of Ireland during 1898 described the ancient building as an oblong oratory that measured 29’ 82’’ x 18’ with walls approximately 3’ in thickness.  It was described as a well preserved example of the first adoption of the true arch in the round arch of the door & windows.  To the north of the church is a cholera burial ground also further on two standing stones.  This was believed to be the location St. Cummin’s grave.  According to tradition he lies buried ‘Idir an dá Leac’  or ‘between the two standing stones.’  A ‘headstone’  incised with a cross of knobbed ends around which are three circular ‘Patrick’s Crosses’ may be viewed between the two stones.  Historians mentioned that the ‘Leac Chuimín / Cuimín or ‘St. Cummin’s Stone’  possibly may have been an altar stone or a cursing or other superstitious stone. (“…stones, of various sizes, arranged in such order that they cannot be easily reckoned; and, if you believe the natives, they cannot be reckoned at all.  These stones are turned, and, if I understand them rightly, their order changed by the inhabitants on certain occasions, when they visit the shrine to wish good or evil against their neighbours. An aeir, or long-curse, has been often thus hurled against a private enemy’ ) (John O’ Donovan)  [ii]

On 21st June, 1803 Rev. James Little of Lacken had an article published in The Transactions of the Royal Irish Academy  that referenced an ancient sepulchral stone or monument which he had discovered close by Kilcummin Church in the previous year.  Another small stone with strange triangular markings was also on the grave.  That particular stone was described in the Ordnance Survey Letters by Professor John O’Donovan as being a stone with crosses at St. Cummins grave.  It was reported locally that the unusual stone ‘vanished’  during the latter part of the 1960’s.  To the west of St. Cummin’s grave another extraordinary stone may be found.  This stone may date from approximately the sixth century, it has been variously described as a ‘Sun Dial’  or ‘A Ship’s Sextant.’  Several theories abound regarding the removal of stones on this monastic site: i.e. fragmented pieces were removed during the early part of the nineteenth century by Dean Lyons P. P. of Kilmore-Erris for ‘certain weighty reasons’  then constructed into the new Ballina Cathedral’s altar.   When referring to the stone in his Ecclesiastical History of Ireland  1854 New York: Father Thomas Walshe formerly of Killala penned that It was removed by John Lyons, Dean of Killala and Pastor of Kilmore-Erris to the church of Ballina, and when the present Cathedral was commenced, the broken slab was deposited in the work under the altar during 1834.  The small area between St. Cummin’s grave with the two raised masonry tombs bear the coat of arms of the Bourke family.  It is also believed that when St. Patrick’s church at Lacken was being constructed some of the ‘blessed clay’  was placed within the foundation.  Situated a few yards north of the old church & graveyard St. Cummin’s Blessed or Holy Well  may be viewed.  The waters from that well are reputed to have curative powers.  This site reports of myths or legends of St. Cummin as an infant & child.  A sundial at Kilcummin is  referenced as ‘At Kilcummin, in North Mayo, where tradition still cherishes the Well used by St. Patrick for baptising his converts in the district, not a year has passed since then without the people holding a station at the well on the anniversary of that day and that day is the last Sunday of the seventh month.  And in that place the Irish speakers call the month ‘Lughnas’ and the Sunday ‘Domhnach Chruim Duibh’ and the English speakers call the Sunday ‘Garland Sunday.’  And not a year from then till now but there has been a pattern at Kilcummin, where the well is ‘Tobar Chuimin,’ they call it.’  Lub na Caillighe  1910 ed. Joseph Lloyd, (Gill and Son)  (Collected and translated from the Irish by Douglas Hyde)  Sketches & several images feature at this link. [iii]

Cuimína was a local folk-saint, with the name later anglicized as Cummin.  St. Cumin was believed to have been a holy person, a wise judge also a fair arbitrator in several disputes.  He possibly spent time at Iona during the seventh century.  He may have been a descendant of Conaing son of Fergus thus a relative of the illustrious King ‘Awley.’   Two standing stones are possibly the burial site of St. Cummin.  To the west of Cummín’s grave another extraordinary stone may be viewed that may date to the sixth century: it has been described as a ‘Sun Dial’ or ‘A Ships Sextant.’   The radiating round arch on the door & windows of St. Cumin’s Church were constructed during the eight century.  North of the church is a cholera burial ground.  A few yards north is the St. Cummín’s Blessed / Holy Well.  [iv]

Saint Cummin or Cuimín was an Irish saint associated with the parish of Kilcummin or Lacken.  It was believed to have been established prior to the eight century.  Several remains of religious structures including St. Cumin’s grave also a holy well feature at the north Mayo site.  Folklore stated that curative powers were attributed to clay from the saint’s grave with a belief that a handful of this clay would prevent drowning.  The privilege to extract the clay & dispense it to those who required it belonged to families with the surname Machan, Maughan or Loughney. [v]

The small church was attributed to Saint Cuimín dated from perhaps the tenth or eleventh century.  Massive stones called ‘cyclopean masonry’  formed the base of its walls.  Two windows on east & south walls are visible.  The entrance door is on the west side.  Beside the church are St. Cuimín’s ‘holy well’  also  his ‘Leach.’   St. Cuimín’s  grave site is marked by two standing stones with an inscribed slab of a cross with circular forms.  A few metres away is the interesting sundial stone. [vi]

St. Cuimín’s Church with graveyard are believed to date to prior 700 AD.  They are located at the north-eastern tip of Kilcummin Head adjacent to the Mayo coastline.  A 1943 survey of local antiquities reported that  The grave of St. Cummin, a few yards north of the church and in the graveyard, is marked by two tall flagstones one of which is seven feet in height and the other under six feet.  It is believed that other saints or disciples of Cummin are also buried in this grave.  Between these stones is another small flat stone which carries the inscription of a cross.  Other stones carrying inscriptions and strange indents have been covered by the high grass and weeds.   Coordinates are 54.277247 N,  9.210117 W (May 2010) [vii]

Kilcummin or Cill Chuimín (Church of Cill Chuimín) was named after the early Irish St. Cuimín. A map of Connaught from the fifth century indicated that the area was originally known as ‘Forrac.’   Signage within the area includes include ‘Cilcummin’  also ‘Cill Chummín.’  Folklore proposed that Saint Patrick travelled through Kilcummin on his journey from Ulster to Croagh Patrick.  The remains of the church of Saint Cuimín are located within the cemetery with also a holy well.  St. Cuimín’s grave is believed to be near a group of stones. Images of church & grave feature at this link. [viii]

The ruins of an old church & holy well are referenced in this PDF: https://www.libraryireland.com/topog/K/Kilcummin-Magonihy-Kerry.php

Knox Hubert Thomas 1908 The history of the county of Mayo to the close of the sixteenth century  (Judges. Figgis & Co. Ltd ) referenced Kilcummin Church:   https://archive.org/details/historyofcountyo00knox/page/18/mode/2up

St. Cummins church is referenced in schools collection on this site: https://www.duchas.ie/en/src?q=Kerry&t=CbesTranscript&p=9&ct=CI