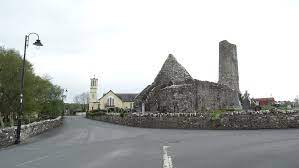 Aghagower or Achadh Fhobhair ‘Field of the Springs’  is a small village in rural County Mayo. Aughagower lies mid-way along Tóchar Phádraig  formerly a part of the royal processional route from Cruachan: the ancient capital of Connacht.  Later it became an important pilgrimage route from Ballintubber Abbey to Croagh Patrick.  The village came to prominence in 441 when St. Patrick founded a church & bishopric with Bishop Senach placed over it.  The Book of Armagh  stated that bishops dwelt there during the early part of the ninth century. St. Senach was originally from Armagh, members of his household travelled with him to Aughagower & Croagh Patrick.  It was recorded that St. Patrick anointed the parish’s first Bishop Senach on his journey to Croagh Patrick. This Bishop founded a church also his daughter Mathona a nunnery within the area.  Situated approximately one hundred yards north of the medieval round tower & abbey alongside the ‘Temple of the Teeth’  was the site of an earlier stone church, believed to have been built atop an original wooden church founded by St. Patrick.  Aughagower represented one of the most influential parishes in Umhaill.  The jurisdiction of Aughagower extended over the ‘Owles’  i.e. the territory around Clew Bay that comprises the modern deanery of Westport.  Several centuries later those churches with their property were absorbed into the diocese of Mayo then afterwards granted to the Archbishop of Tuam.  Six centuries following St. Patrick’s departure from Aughagower (1215 ) a dispute arose as to possession of church & lands in Aughagower between the Archbishops of Tuam with Armagh diocese.  Pope Innocent in Rome settled the dispute in Tuam’s favour.  Cloondacon is a townland in the parish of Aughagower in the barony of Burrishoole in County Mayo.  Bordered to the northeast by Mace South, to the south by Tevinish East, to the southwest by Aughagower, to the west by Gorteen &  to the northwest by the Deerpark.  Cloondacon is situated on Tochar Phádraig on the trail of the the ancient route from Ballintubber Abbey through Aughagower to Croagh Patrick. [i]

The name Cluain Dá Chon refers to an ancient legend in that a pagan chieftain set two wolfhounds on Saint Patrick but instead of an attack the hounds licked his hands.  The chieftain was moved by this then became a Christian.  Another version stated that St. Patrick made the sign of the cross over them with the result that the two hounds were swallowed up in an oval shaped hole called ‘Poll na gCon.‘ (the hole of the hounds )  Coordinates of Aughagower are 53 45 49 N, 9 27 50 W.  Cloughundra or ‘Cloch Andra’  is a large stone of approximately one hundred & fifty kilogrames situated on the village green.  A local folk-tale states that once a giant in Aughagower threw the stone over his shoulder, he would throw it ‘as far as another man would send a pebble.  The stone is there yet and the trace of his fingers in it.  A great many strongmen spend their leisure time trying to lift the stone.’   Dabhach Phádraig  (Patrick’s vat or tub ) is a circular bath surrounded by a stone wall.  In the past pilgrims may have bathed their feet or it may have been used by St. Patrick with his household as a washing place.  Due to local drainage the well is now dry except in extremely wet weather.  A ‘Sheela na Gig’ or ‘Sighle na gCíoch‘ was discovered in a nearby ditch: the Mayo Historical Society organized for it to be fitted to the outside wall of Dabhach Phádraig in 2001.   Moved during 2017 to form part of Dabhach Phádraig’s eastern wall for security also to make it easier to find as the light conditions affect how easily the figure may be viewed properly.  Leaba Phádraig (Patrick’s bed ) is believed to have been a hut or tent where St. Patrick rested. [ii]

Stations at Aughagower begin at Leaba Phadraig ‘Patrick’s Bed’  that lies west of the tower at the base of a tree.  Prayers are recited seven times whilst the pilgrim continues to each well in turn then repeats the prayers as they walk around the well.  Leaba Phadraig  has a circumference of twenty-four feet.   As the soil had healing prosperities:  if one removed soil from the tree it was necessary to return the soil to the base of the tree following the healing.  (Brian Hoban 17th Mar 2012 ) [iii]

Leacht Tomaltaigh  is an ancient monument on the Gorteen – Aughagower townland boundary just south of where the Tóchar Phádraig passes.  Its mythical origin related to a tale from St. Patrick’s time in that a man tested the claims of the generosity of St. Patrick’s household when those in need of food would not be turned away: at the time he was informed to wait as food was in oven, he declined then rode away, but had an accident:  a monument was erected to mark the spot of his demise.  This explanation of the myth is very unlikely!  It is believed that this monument marks the grave of one of St. Patrick’s charioteers, Totmael (‘bald poll’ ) whose demise was recorded in the Book of Armagh  also The Tripartite Life of St. Patrick  whilst St. Patrick with his household were travelling to Croagh Patrick along the Tochar Phadraig trail.  This monument is still in situ in a repaired, mortared form.   It stands approximately 2.5 feet tall: previously it had a height of six feet.  St. Patrick’s Knee is a small stone within the graveyard with a small recess carved out of it that regularly is filled with water.  Local legend states that St. Patrick knelt on this rock then left an imprint.  The gathered water is believed to be blessed.  Tobair na Deocháin  or the ‘Well of the Deacons‘ has now dried up.  Originally pilgrims drank water while performing their pilgrimage.  A tree growing over Dabhach Phádraig was believed to have curative powers.  The soil was applied in a poultice with the order that when the ailment was cured the soil must be returned.[iv]

Aughagower is located five miles east of the ‘Reek‘ or Croagh Patrick.  According to The Annals  St. Patrick stayed in the village prior to his climb to the summit.  The name Aughagower is derived from the Gaelic Achad Fobuir or ‘field of the spring’.  The pilgrimage to Croagh Patrick followed the Tochar Phadraig as it went through Aughagower village. Several remains associated with pagan or druidic activities are within the area also the strong association with St Patrick. He  was believed to have baptized the first converts at the site. He established a church known as Teampall na bhFiachal  or ‘the church of the teeth’ (it received its name from a line of rocks that resembled a set of teeth visible from the church ) The Stations at Aughagower began at Leaba Phadraig ‘Patrick’s Bed’  that lies west of the tower at the base of a tree.  Prayers are recited seven times whilst the pilgrim continues to each well in turn then repeats the prayers as they walk around the well.  Other features within Aughagower are several graveyards.  The round tower dates from the twelfth century also there is a mediaeval church at the end of the graveyard within which the tower stands. Nearby there are also two holy wells Tobar na nDeochan ‘Well of the Deacons’ & Dabhach Phadraig ‘St Patrick’s Vat.’  These are still regarded by local people as part of the stations in connection with the ‘Reek.‘  Tobar Na nDeochan is immediately outside the wall of the old graveyard.  On the opposite side of the road is Dabhach Phadraig with a drain connecting both wells inside the wall. (Brian Hoban 17th Mar 2012 ) [v]

The name of Achadh Fhobhair means ‘Field of Springs.’  This eleventh century round tower was constructed within a monastic site founded by St. Senach in a small enclosure in the  village centre.  It was an important pilgrimage site.  The tower’s height was 15.85 metres with a diameter of 5 metres.  It featured a 2.2 metres tripartite arch.  The original arched doorway faced east.  A second lintelled doorway was later an addition to the drum’s northwest.  Three lintelled windows were installed.  The original coursed masonry on the south side was of much better quality than that of the refurbishment during the 1960’s.  Cap stone is missing also the tower has been damaged.  It leans slightly to the north with that side higher than the south.  [vii]

A church ruin with cemetery lie close to the tower within an enclosure in middle of village. The tower stood sixteen metres in height.  Circumference above ground level was 5.76 metres with an external diameter of five metres.  The south side is slightly lower than the north.  The original doorway that faced east was just two metres from the external ground level, it had an arched three stone top with three stones in each jamb.  The wooden ground floor doorway allowed entry into the tower.  The inside ground level was approximately nine inches lower than the external level.  Five rings of stone corbels for floor supports were included: the first was just below the original doorway with the highest below the top of present wall.  The later added doorway faced northwest at ground-level & was square-headed.  None of these are visible: perhaps it is now below ground.  A modern doorway allows access to ground floor.  Severe fire damage is visible to original door.  Tochar Paidraig runs through this monastic site, (between Ballintubber Abbey & Croagh Patrick or its local name ‘The Reek’ ) [viii]

A legend reported that the cap stone was struck by lightning with the result that the cap landed on a hill in Teevinish over half-a-mile away.  It was brought to the church by a woman who carried it in her apron!  This is preserved within the present church. [ix]

A monastery was founded in Aughagower by St. Senach between the fifth & seventh centuries.  It was in existence until the thirteenth century.  The earliest structure visible now is sixteen metres leaning round tower constructed between 973 AD & 1013 AD.  The tower’s original entrance door is approximately 2.2 metres above ground level however a lower entrance was added at a far later date.  [x]

During A.D. 440 St. Patrick visited the diocese of Tuam in Mayo from Airtech in northwest County Roscommon.  He travelled west from Aghamore to the summit of Croagh Patrick. Following his forty days there he founded Gloshpatrick Church at the base of the holy mountain, he left St. Senach (according to this site he was named Agnus Dei as a reference to his meekness ) in charge.  St. Patrick’s sojourn has been recorded in an article Croagh Patrick of the Diocese of Croaghpatrick also that Bishop Senach was placed over the running of the church.  The Book of Armagh’ recalled that bishops dwelt in the area at the early part of the ninth century.  The jurisdiction of Aghagower extended over the ‘Owles’  the territory around Clew Bay that comprises the modern deanery of Westport.[xi]

West of a medieval church in Aughagower is a much damaged & repaired tenth century round tower. [xii]

An article by Suzette Hughes The Round Tower of Aughagower  was published in Westport’s Historical Society’s Journal Cathair na Mart  2008 No. 26 (pages 50-55 )

A YouTube video of round tower & church ruins by Dr. Oliver Whyte is available on this link:

Publications that refer to Aughagower include the following:

[iii] The Influence of St. Patrick (http://www.castlebar.ie/General/THE-INFLUENCE-OF-ST-PATRICK-ON-MAYO-HERITAGE.shtml) [Assessed 24th May 2021]

[v] The Influence of St. Patrick (http://www.castlebar.ie/General/THE-INFLUENCE-OF-ST-PATRICK-ON-MAYO-HERITAGE.shtml) [Assessed 24th May 2021]