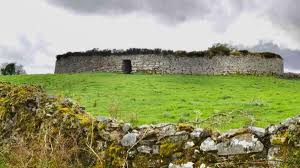 Kilcashel is taken from the Anglicized version of the Irish Coill na Chaisil ie.‘wood of the stone fort.’   Most significant discoveries were the three stone forts or cashels that lay upon a sandstone ridge, just above the hundred metre contour line.  Two have been destroyed but the remaining stone fort is a national monument.  It measured thirty metres in diameter.  It consisted of a single circular wall of five metres in thickness also three metres in height. Within the fort were two creep-ways in a circular wall of the fort that led to an internal wall – chamber.  A formal entranceway with a lintel stone, four sets of V-shaped steps set into the stone.  Several interesting features at Kilcashel area include: An undated enclosure, (destroyed during twentieth century) a wall terrace,  a Bronze Age fulacha fiadh, a bullaun stone, two early medieval souterrains, three early medieval cashels & two early medieval house sites.  Nine archaeological sites are located within a one kilometre radius of Kilcashel also a further forty sites within a two metres radius.  The Kilcashel landscape project identified several other archaeological features.  The entrance to Kilcashel Fort was located to the east, it consisted of a trillian doorway with double lintels.  Cashel was too small to function as a royal site but may indeed have predated the seventh century Crill Gabhlach Law Tracts.  It provided protection from winds for the inhabitants. The two hilltop cashels were linked by a cave through a six hundred & twenty metres long tunnel.  Images by author &  lecturer Dr. James Bonsall feature at this link [i]

Known as Coill an Chaisel, ‘wood of the stone fort’  (Ordnance Survey Field map books 1837)  Within fifteenth kilometres of Kilcashel are two hundred & nine known archaeological sites.  cashels were founded as residences or farmsteads possibly dated 500-2100 AD.  A circular or oval area was surrounded by stones.  Kilcashel Stone Fort was thirty-one metres in diameter, 2.74 metres in length also 3,65-3.39 metres in thickness (Westropp 1803  Ancient Forts of Ireland)  Westropp described from an unnamed source that ‘a passage high enough for a man to stand in is now inaccessible under the Cashel for 26 feet.’   A survey with excavations during 1999 by Martin Fitzpatrick identified a loose layer of stones also a paving layer for circa six metres with a chamber roofed by lintels.  The OPW field notes suggested that the cashel was circa two metres in height & circa eighty metres in width.  It extended for circa six metres. Several maps & images by archaeologist Dr. James Bonsall, a PDF or article may be viewed at this site [ii]

Geophysical survey by use of ERT survey was carried out on the top of an underground chamber at the stone fort known as a souterrain aligned west to east.  Three of the four ‘V ’ shaped steps in the wall of the fort were proven by the survey to align to the cardinal points of the compass at north, east & south.  The fourth step was ‘offline.’  It was intended to carry out further surveys during 2010. [iii]

Kilcashel Stone Fort & double Court Cairn is a  national monument located in Co. Mayo.  It eight hundred metres southeast of Kilmovee.  Kilcashel & was possibly constructed circa 2,500-500 BC.   It was thirty metres in diameter, three metres in height also five metres in thickness.  A souterrain also a bullaun stone were on the site.  Coordinates are: 535300.4N, 84 048.7W. [iv]

A  large ringfort called Kilcashel located within the townland of same name or Coíll an Cashail; ‘the wood of the stone fort’  is protected & visible.  It measures thirty metres in diameter.  The fort consisted of a single circular wall of five metres in thickness also three  metres in height.  One entered the fort through a formal lintel entrance. Interior combined the ruins of two – house sites also a souterrain.  One accessed the top of the walls from the interion via four sets of a ‘V ’-shaped stone steps.  A creep way linked two internal wall-chambers within the fort’s walls.  The wall chamber appeared to align with the rising sun. [v]

On this national monument site are remains of two stone houses.  Included were two wall chambers: one at west – northwest with the other northwest.  A seven metres long passageway joined both chambers.  The top of the ringfort was accessed via four sets of stone steps of an inner wall.  The inner diameter of the ringfort was twenty-eight metres with the total diameter of thirty-six metres.  Cashel was accessed through a lintelled doorway on the east-southeast side.  Entrance to the walls were 4.20 m in thickness.  Several images of the Cashel feature on this link. [vi]

Kilcashel / Caiseal is a circular stone fort with its name an Anglicized version of the Irish ‘wood of the stone fort.’   Situated outside Ballhadeereen town in Kilmovee village it is dated from the early Medieval period. Kilcashel Fort was thirty metres in diameter, the wall five metres in thickness & three metres in height.  The monument was believed to have been erected for cultural reasons due to the existence of two chambers within its walls.  It also portrayed a perfect alignment with the sunrise.  The first solar event occurred prior to Halloween with the second event in February when the chamber was lit up for three days. Jon Grainger studied the chambers; both were accessed by ‘V ‘- shaped steps built within the cashel walls of the national monument.  Remains of two-house sites also a souterrain lie within the complex.  Archaeological Work was undertaken during 2009. [vii]

Kilcashel Stone Fort, half a mile southwest of Kilmovee was described by archaeologists as ‘exceptional.’  The name of the townland was Coill an Chaisel or ‘wood of the stone fort.’  Included in the archaeological site were Bronze Age Fuladha Fia, early medieval cashels, an undated enclosure (destroyed during the twentieth century) two early Medieval Souterrains, a bullaun stone also two-house sites.  This national monument is thirty metres in diameter.  The construction consisted of a single circular wall that was five metres in thickness & three metres in height. Inside the stone fort were two creep-ways.  The circular wall of the fort led to an internal wall – chamber; with a formal entranceway with a lintel stone.   Four sets of ‘V ‘-shaped steps are set into the wall with a terraced wall also a souterrain & two collapsed house sites.  Coordinates are 53.882177, -8.682877.  Several features were discovered from the study of early maps by the Kilcashel Landscape Project that showed significant changes from mid-nineteenth century. (Tom Gillepsie in Mayo Gems  of The Connaught Telegraph 27th June 2020 ) [viii]

An excavation undertaken by Dúchas on Kilcashel Stone Fort walls & monument interior discovered a trench 5.4 metres in length, 1.25-1.3 metres in width.  The removal of sods & topsoil revealed a loose layer of stone that formed the passage surface.  A spud stone at the east end indicated a gateway or doorway.  The paving layer of the passageway was made up of large flat stones in the centre whilst smaller round ones were at the sides.  Below the paving layer excavations revealed the original earthen surface layer of the passage.  Two post-holes at the site indicated a possible east end door or gate with activity at the west that suggested perhaps the presence of two large pit features. [ix]

This fort is located eight hundred metres southeast of Kilmovee.  Erected during 2,500-500 B C.  It was thirty metres in diameter, with three metres in height also five metres in thickness.  The site’s elevation was ninety-five metres.  Coordinates are 53.883434N, 8.680186W. [x]

Kilcashel Stone Fort was featured on a postcard by Mayo Genealogy Group. It may be viewed at this link: https://www.ouririshheritage.org/content/category/archive/people/mayo_genealogy_group/daoine-agus-ait-connecting-our-communities-heritage-postcard-project

Drone footage of Kilcashel Stone Fort by Lorraine Campbell of Kilmovee community centre may be viewed at this site: https://www.heritageweek.ie/projects/drone-footage-of-kilcashel-stone-fort-in-kilmovee-east-mayo

This Kilcashel  Stone Fort is referenced at this site: https://www.archaeology.ie/sites/default/files/media/pdf/monuments-in-state-care-mayo.pdf