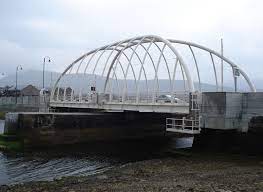 Pre-nineteenth century a narrow channel separated Achill Island from mainland Mayo.  The necessity for a permanent link across the narrow channel was important for seasonal migration, financial or livestock trading.  Subscriptions were collected by an interdenominational committee.  A swing bridge that pivoted on a central pier was opened by Michael Davitt also named after him (founder of the Land League ) during 1887.  It survived for sixty years until changes in transport modes required a wider roadway. (This site features an image of a GSR bus crossing that bridge )  During 1947 the old bridge was abandoned; the second Michael Davitt Bridge was constructed South of also alongside the original bridge.  J. C. McLoughlin Company of Pearse Street Dublin were employed in the new construction (at that time it was the largest bridge structure supplied by an Irish company ) Mayo County Council is responsible for the maintenance of the Achill bridge.  Operatives ensure the safe passage of high-masted vessels that passed beneath the structure.  Images by Gary Wynne feature at this link. [i]

Consideration for an Achill Sound Bridge to connect Achill with the Curran Peninsula was discussed  during the eighteenth century.  People crossed the channel at low tide by foot or horseback, later by ferry.  According to William Maxwell ‘many islanders has lived and died without ever seeing a town.’   A Mayo County surveyor Mr. Glover drew up plans for a bridge, approved by civil engineer Mr. J. Price.  The Board of Trade in London granted authorization. During 1883 an administrative body organized funding with a price of five thousand pounds. On 7th July 1885 the foundation of a swivel bridge was laid by Fr. O Connor.  Pat Sweeney & John Curran were appointed contractors.  The bridge  cost six thousand pounds & was raised by a committee.  The Achill Sound Bridge construction began during 1886, it was completed within a year.  It provided for ‘horse & cart’  traffic not motor vehicles.  The new bridge was opened by Michael Davitt then named after him.  The actual opening for road traffic on that bridge occurred on 31st August 1887. [ii]

Due to deterioration of the central section by the 1930’s: Mayo County Council decided to replace it in 1939.  Further reconstruction was scheduled to commence in 1947 but logistical problems involved in the Installation of the underground ducts for cables also due to weather conditions it was 29th September 1948 before its commencement with completion then during January 1949.  During the 2000’s further renovations were undertaken that were completed during November 2008.  Bridge was designed by Malachy Walsh & Partners with the design based on the Spanish Calatrava architectural design.  The initial cost was expected to be approximately five million: but it far exceeded that figure. [iii]

The prospect of an Achill Sound Bridge to connect Achill Island to the Corraun Peninsula was considered during the early 1880’s.  The statement that ‘many islanders has lived and died without ever seeing a town’  was attributed to William Maxwell.  People crossed the channel by ferries, foot, or on horseback.  A Mayo county surveyor Mr. Glover presented plans: approved by civil engineer Mr. J. Price with official authorization granted for construction by The Board of Trade in London.  Funding was organized to finance the project at a cost of five thousand pounds by an administrative body in 1883.  During 1886 construction of the Achill Sound Bridge commenced.  It was completed one year later then renamed The Michael Davitt Bridge.  Designed for horse & cart but not vehicle traffic.  By the 1930’s the bridge structure had deteriorated.  Mayo County Council decided in 1939 to replace the centre of the bridge.  A proposal to widen the bridge during 1947 was postponed due to inclement weather conditions.  Construction finally recommenced on 29th September 1948 & was completed in January 1949.  Michael Davitt Bridge is twenty-one foot six inches in width, seven hundred & forty feet in length also it weighs three hundred & ninety tons.  The cost of this project was approximately twenty thousand pounds (Martina Cafferky ) [iv]

Pre-1887 the narrow sea channel at Achill Sound was accessible only at low tide by foot or by horseback.  A new Achill Sound Bridge was in the process of renovation following the pivotal mechanisms corrosion.  Work proceeded slowly throughout the winter as overhead high – tension wires were required to be re-routed underground.  A kiosk at the bridge with automatic controls would be installed as a one-person operation.  Barriers erected were required for traffic measurers such as exists at railway level crossings.  Weight of the new structure would be approximately two hundred tons.  The five million swing bridge at Achill Sound replaced the old structure (called after Michael founder of the Land League )  (Tom Shiel The Irish Times 29th October 2008 ) [v]

As the Achill Sound channel had strong currents or winds during the 1800’s the crossing by Islanders was undertaken by foot or horseback at low tide or by means of a ferry.  The construction of a bridge in 1886 occurred following several years of funding.  A swing ridge pivoted on one central pier to allow sea vessels past beneath was completed a year later.  It was named after the nineteenth century Fenian & founder of the National Land League Michael Davitt who officially opened the bridge.  Unfortunately: that bridge was designed for lightweight horse-drawn traffic.  By the 1900’s it had deteriorated due to the high volume of motorized traffic.  During 1947 Mayo County Council decided to demolish the bridge then replace it.  A new swing bridge was built by J. C. McLaughlin of Dublin; (at that time it was the largest bridge construction project undertaken by an Irish Company)  It was completed during early 1949.  However by the early 2000’s that second bridge experienced problems with the swing mechanism.  A decision was taken to replace it by Mayo County Council.  The third Michael Davitt Bridge  opened during 2008.  Designed by Malachy Walsh & Partners to a design based on a Spanish Calatrava architectural design model.  The bridge was 6.5 metres in width, 225.5 metres in length.  It weighted three hundred & ninety tons.  This bridge is Illuminated at night by LED lighting integrated into the bridge design.  A large image features on this site. [vi]

The plan for a bridge to connect Achill Island to the Corraun Peninsula was considered during the early 1880’s.  A Mayo County surveyor provided plans approved by civil engineer J. Price. Official authorization was received from The Board of Trade in London while an administrative body was organized to finance it during 1883 at a total cost of approximately five thousand pounds.  As costs exceeded the estimate John Grey Vesey Porter of County Fermanagh contributed his personal funds to enable construction.  The bridge’s structure consisted of a steel bowstring girder construction with a span of one hundred & twenty feet or thirty-seven metres pivoted on a central pier.  The width of the roadway was eight feet or 2.4 metres.  During 1887 Michael Davitt Fenian, social campaigner, founder of the Land League opened the bridge designed for horse-drawn traffic.  With the advancement of motorized traffic from the early 1900’s the bridge’s surface deteriorated.  Mayo County Council decided on a replacement in 1947.  It was completed by Dublin Construction Firm J & C Mc Gloughlin.  It was one of the largest bridge construction projects by an Irish company at the time.  By 2007 a problem encountered by the swing mechanism hindered traffic of vessels.  Corrosion entailed the construction of a new swing bridge again provided by Mayo County Council.  That design by Malachy Walsh & Partners was based on a Spanish Calatrava architectural model.  Contractors were SIAC Construction.  The bridge opened during 2008.  It weighted three hundred & ninety tons.  On 3rd September 2017, the bridge celebrated its 130th anniversary.  An image of the third Achill Sound Bridge during 2009 features at this link.[vii]

An image of old bridge may be viewed at this link: https://www.voyagevirtuel.co.uk/ireland/pages/achill-island-44.php

An image of bridge is featured on this site: https://www.francisfrith.com/achill-island/achill-island-the-bridge-and-sweeneys-c1955_a311012

A view of Achill bridge may be seen at this link: https://www.tripadvisor.ie/LocationPhotoDirectLink-g651977-d1929893-i63437170-Achill_Secret_Garden-Achill_Island_County_Mayo_Western_Ireland.htmlT

The Michael Davitt Bridge at Achill Sound is the bridge that connects the island to the Mayo mainland: http://www.visitachill.com/en/atlanticdrive2.html

This link states that the bridge connects Achill island to mainland Ireland: http://www.achillsoundhotel.com/index.php/about-achill

[i] Bridges (http://www.askaboutireland.ie/reading-room/environment-geography/transport/transport-infrastructure-/bridges/) [Assessed 2nd May 2021]