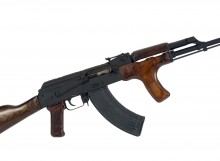 Commissioned I was in December 80,

of steel and ash I was quite weighty.

From a factory in Turkistan my life’s journey began,

in a container out of Kazakhstan.

Over the sea to North Africa,

where I rested for a short while in Libya.

Then on again over seas of sand,

until we parted again from dry land.

North we headed with Atlantic seas,

until we reached a damper breeze.

From my container I was removed to a van,

under scattered tools another phase of my journey began.

On rare occasions my trigger was pulled and I burst into life to do no good.

I only came out for very short whiles,

and whenever I did nobody smiled.

Death and destruction was all that I left,

until returned to dark, damp depths.

There I lay for my last few years,

until brought to the surface to muffled ears.

A Canadian General with one other there stood,

angle grinder in hand and a notebook.

The last that I felt was the vice grip closing,

before the angle grinder began to end my reposing.

Into bits I was cut, a sad looking sight,