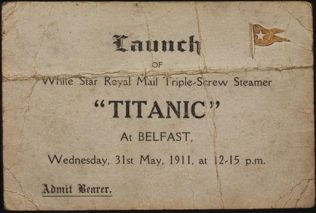 A ship that claimed to be unsinkable.
A diaster like this was simply unthinkable,
Left families heartbroken and distraught.
Something like this just wouldn’t be a common thought.

The Voyage of the ship Titanic,
Was made for people with hope of new life across the Atlantic.
New life, new hope and new dreams,
Was traded for many screams.

As she sank to the bottom of the ocean,
Away disappeared work and devotion,
Of all the workers from Belfast,
‘How did this happen?’ they all asked.

People say it was an experience to remember,
Said the people who were a member
Of the disaster of the unsinkable ship, The titanic.