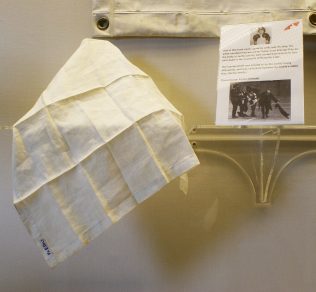 Westland Street was where I was due,

In Fr. Edward’s pocket I went with him,

And through the flap of his jacket my view was dim.

I heard others around but I wasn’t sure who they were,

But I heard one mention Free Derry Corner,

As Fr. Edward walked in what I guess was throngs,

I didn’t expect anything could go wrong.

The next thing I knew I heard guns a groan,

“Bloody hell”, he said and I knew it was bad,

And over the gunfire I heard a child scream

“Dad where are you dad?”

It was absolute mayhem for the next minute or so,

As the crowd scattered for refuge in the safety of their homes,

The women were screaming and the men were a shout,

Unaware in their haste of the fallen strewn about.

Edward ran to nearest of those on the ground,

And used me to wipe some blood off his frown,

“HELP!”, cried Edward and another came to his aid in a dash,

But when they tried to lift him he landed with a crash.

As others came over the gunfire did not cease,

And this is when it’s useful to own a white handkerchief,

Fr. Edward animatedly waved me around,

As the others escorted Jackie, that boy shot down.

Fr. Helped the injured for hours on end,

And luckily some looked like they were on the mend.

But some were not so lucky and stirred no more,

And I knew there would be tears, and the tears they would pour.

We came to the last who was alive but weak,

And comfort and shelter was what he did seak,

But by the time we found a house willing to give him a bed,

I looked into his eyes and knew he was dead.