You are here: HomenextExplore our archivenextTopicsnext'The History of Ireland in 100 Objects'nextLamp from The River Clyde

Lamp from The River Clyde 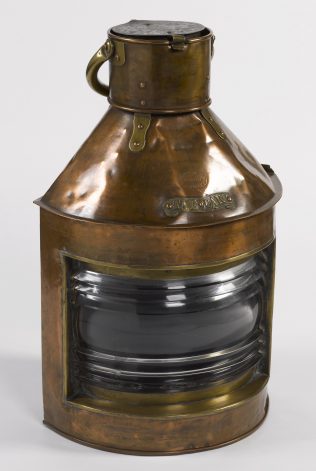 The wind blew me from side to side,
I tipped and tapped along the treacherous ride.
The rain battered as I led,
The men slowly, most soon to be dead.

For them I lit so they could see,
The way to death at Gallipoli.
I led them forwards through the straits,
To where for most hell awaits.

From high up the ship, there I hung,
From left to right the ship swung.
Then we beached for my journeys end,
But brave young soldiers did I send.

Off they plunged into the deadly waves,
Bushed and bashed never to be saved.
Down they sunk away from my light,
Never reaching the fore coming fight.

For the men that stumbled up to the shore,
Gunfire met them with a thunderous roar.
One by one the irish men fell,
That I did think so swell.

But still more rushed up to the Turkish men,
Who sliced and slashed again and again.
On and on came the gunfires sound,
As soldiers fired their deadly rounds.

On it went for hours and hours,
Till the only sound left was the shell towers.
The battle was over, most were dead,
As my light shone upon their sorry heads.