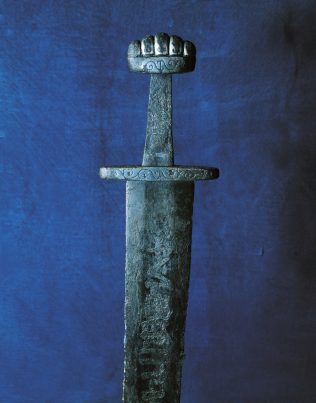 I was forged from iron in century nine,
In a Norwegian blacksmiths (long lost in time).
My owner used me to hack and slash,
And on to enemy shields, I would crash.

People thought it wouldn’t end,
And that he would continue to defend.
Alas, all the claims turned out to be lies,
For soon he did meet his own demise.

But he had died a hero’s death,
And he had fougt with every living breath,
So he was placed within a tomb,
With me beside him in the gloom.

Time went by, the years were long,
I thought it would seem quick but I was wrong.
After some time, they picked me from the earth,
And so began my rebirth.

And so in this glass box, I rest and lay,