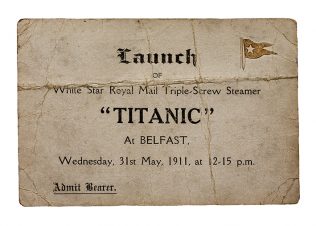 I was once a symbol of joy,

Not a thought that the sea could destroy.

I was passed from hand to hand,

Some would never reach dry land.

But it was hit in less than a blink.

Down it went in an early hour,

The onlooking faces both frightened and dour

The passengers were to be its feast.

They hadn’t a hope of escape,

Let alone to reach the cape.

The frightened people hit the water,

The icy temperature was their slaughter.

Frozen bodies floated on the sea,

Whilst the living tried to flee.

I witnessed as all of this unfolded,

To my memory these images were moulded.

Never to forget I was a symbol of Joy,

They will never forget the sea can destroy.