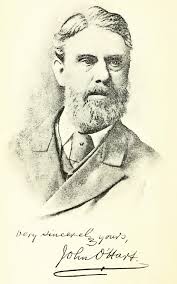 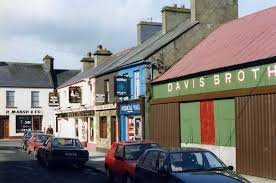 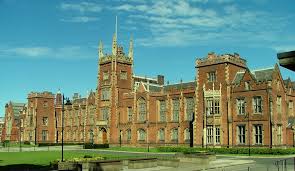 This very interesting man devoted his life to antiquarian also genealogical research.  His legacy of  Irish Pedigree  has been perused down through the years.

Two years later he resigned from the R. I. C. [vii]

John O ‘Hart transferred as assistant clerk to the County Inspectors office in Oughterard, Co. Galway.  He commenced employment with the Commissioners of National Education in Ireland during 1854. [ix]

He was appointed to the staff of Ringsend School Dublin during 1856. [x]

John O ‘Hart produced his work The Irish Landed Gentry when Cromwell came to Ireland  in 1887 (James Duffy Dublin) that was re-printed with an introduction by Edward Mac Lysaght, the First Chief Herald of Ireland during 1869.  His unique Irish Pedigree; or The Origin and Stem of the Irish Nation was produced during 1876 & 1884 in two volumes. [xi]

He contributed articles to the  London monthly magazine Hibernia. [xiii]

To complete his genealogies he studied the writings of Cú Choigcríche Ó Cléirigh, Dubhaltach Mac Fhirbhisigh & O’Farrell.  Also in the Annals of the Four Masters for medieval pedigrees. He used the works of Bernard Burke, John Collins & others to extend his genealogies from the seventeenth century onwards. [xv]

He proved that Queen Victoria was actually descended from the High Kings of Tara in his Irish Pedigree; or The Origin and Stem of the Irish Nation masterpiece!  [xvi]

John O ‘Hart’s demise occurred  at Clontarf in Dublin during 1902 while he was aged seventy-eight years. [xvii]

The National Library has referenced John O ‘Hart with ‘It is clearly the duty of Irishmen to support and encourage native literature.  Here is a countryman of ours who has attained a high rank among contemporary archaeologists by perseverance in face of circumstances after adverse, and it was surely a disgrace and stigma on cultural Irishmen if his works should fail their well – won need of recognition and reward.’   [xviii]

The National Library holds a letter from John O ‘Hart to Chrissie M. Doyle that stated she may have keep his books until the end of the month.  She hoped that they may provide the information for her work. (August 7th  1898)  [xix]

Belfast Linen Hall Library hold the 1876 edition of the ‘rish Pedigree; or The Origin and Stem of the Irish Nation.  [xx]

These publications by John O ‘Hart may be viewed online:

In an article titled John O ‘Hart: Hero and Villain Grehan stated that  for John O ‘Hart as the scope of the work expanded through its various editions O ‘Hart began to incorporate material relating to the non-Gaels: taken from the original sources in the Public Record Office that were destroyed in 1922.  O ‘Hart had an extraordinary appetite for work and appears to have read and absorbed every single Irish pedigree published before the 1870’s.  He was also a passionate nationalist, and this passion shaped and distorted what he wrote.’ (John Grehan 11th July 2016) [xxiii]