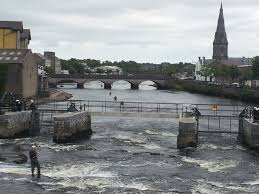 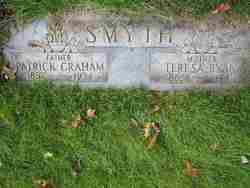 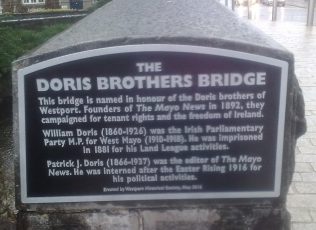 Patrick Grehan Smyth was Mayo’s first G. A. A. President.   His most famous publication was Wild Rose of Lough Gill.   He was the first editor of The Western People  newspaper in Ballina.

During 1890 P. G. Smyth refereed the Mayo Championship match at Castlebar that was between Sligo & Mayo. [iv]

P. G. Smyth offered his resignation due to his impending emigration. [v]

He emigrated to Chicago with his brothers Thomas also James Pemberton Smyth. [vi]

He worked alongside his brothers at his uncle’s premises John M. Smyth’s furniture store. [vii]

Patrick G. Smyth married Katherine Doris (daughter of William Doris, M.P. for West Mayo also co–owner of Mayo News with his brother Patrick in Westport, Co. Mayo ) on August 15th 1891. They returned to the U.S. by ‘The City of Paris’  from Queenstown to Chicago. (20th August 1891)   Patrick Grehan Smyth was married a the second time to Theresa Winifred (Tessie ) Ryan (1865-1982) on 25th  February 1900. They had a son Robert Michael also daughters Eileen (later Sr. Mary Alma ) then Marguerite A. (a paid genealogy site ) [viii]

The title page of The Wild Rose of Lough Gill  (Dublin ) 1883 referred that P. G. Smyth wrote The Duchess of Inver  a tale of the Irish war in the seventeenth century dedicated to Timothy D. Sullivan MP for Westmeath.  He produced verse for numerous Dublin periodicals:  included were The Irishman, The Shamrock, Young Irelander also The Weekly News.   P. G. Smyth contributed an article in The Western People  on Moyne Abbey during 1887.  He penned the preface to King and Viking  a tale of the Danish invasion of Ireland during Dublin 1889.  While in Chicago his publications were amongst others the following in The Gael, Passing of the Clan Uillioam 1 in 1909:Told out of Court  tales of Bench & Bar.   During 1909 Hire Sheet Music as  a supplement to The Ladies’ Review.  During 1911 he published Rhyme with Reason, a garland of Irish Shamrock’s, many of them grown in Ireland.  [x]

James M. Smyth, New Buffolo on 26th January 2009 stated that his grandfather Patrick Grehan Smyth had written several articles for The Catholic Encyclopedia  following his emigration to Chicago in the U. S.  [xi]

The name has long been a puzzle to Englishmen who saw nothing more in it than the cave man sobriquet ‘shake a spear’  but for an American writer Mr. Smith author of the The Wild Rose  it was different.  [xiv]

According to article seabhach is bior (a hawk & a spear) as it happens is the armorial bearing of the  Shakespeare  family. (6th October 1928 page 8 ) [xv]

Following Michael Scanlon’s demise in Chicago (author of Jacket’s Green also The Bould Fenian Men) in 1917 Rev. P. L. Murray in an article titled Poet Laureate of Fenianism  in the Gaelic Quarterly Review  no. 1 June 1936 referenced P. G. Smyth in an appreciation of Scanlon with ‘A short but welcome biographical sketch, written for the Irish World by one of Scanlon’s old friends – P. G. Smyth, the author of the Wild Rose of Lough Gill, – merely whetted up an  appetite for more information.’ [xvi]

When the football club was founded in Ballina James Wallace Melvin informed The Western People  editor Patrick G. Smyth that ‘I’m going out, Pat, to start a club that will shake all Ireland.’  [xvii]

This link features an original copy of 1883 The Wild Rose of Lough Gill  (Gill Dublin): https://www.abebooks.co.uk/first-edition/Wild-Rose-Lough-Gill-Smyth-Patrick/13974165475/bd

An extract from Travels through Time published in The Mayo News on 24th February 1993 (assessed 12th Sept 2019 ) stated that ‘As can be seen P. G. Smyth is mentioned among  illustrious novelists at Mayo’s Carnegie Library at the Courthouse in Castlebar, who invited applications for the establishment of branch libraries in various districts during 1928.’  The library announced that recent acquisitions included P. G. Smyth author of Wild Rose of Lough Gill.

[ii] The Green and the Red

[v] The Green and the Red