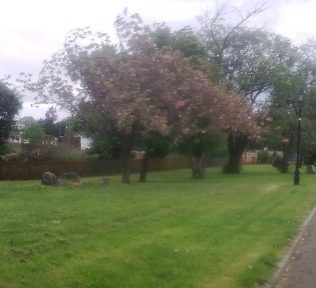 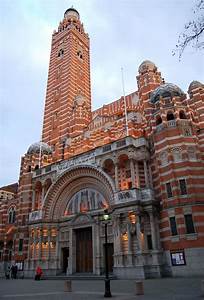 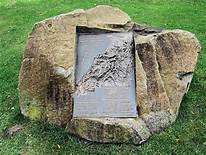 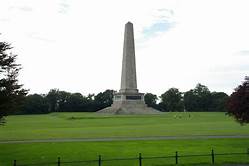 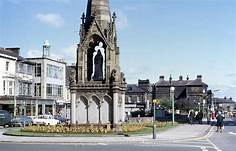 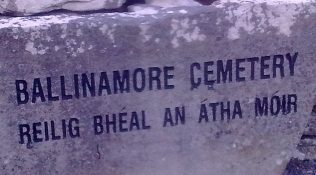 Dermot Macmanus had lived during his early years at the family home in Kiltimagh, Co. Mayo.  As a boy on his father’s Estate had sought out the tenants to hear tales of local ‘happenings’: parts  of which he later penned in ‘The Middle Kingdom’ as he was a staunch believer in the ancient & continuing spirit life of the countryside.  He was educated at Westminster School & Sandhurst. (An Obituary of Captain Dermot MacManus in ‘The Irish Times’ 1990 ) [iv]

Born into a well-to-do family in Mayo, he had been educated at Westminster and Sandhurst.  He entered Trinity College, Dublin following discharge from the army.  (Carlton Younger) [v]

Commissioned into the Royal Inniskillin Fusiliers Macmanus served in India, during WW1 he fought in the Dardanelles, was seriously wounded later invalided out of the army. (An Obituary of Captain Dermot MacManus in ‘The Irish Times’ 1990)  According to Calton Younger (author of ‘Ireland’s Civil War’ 10th August 1988) Macmanus had a brilliant record in the British army like many others.  Blown up at Gallipoli, he had been eventually been invalided out of the Inniskillen Fusiliers.  From Geni 15 /2/ 205 it was reported that Journalist & Author Maj-Gen Dermot MacManus (Diarmuid Mac Maghnuis) joined the British Army in 1918.  He was Captain of the 10th (Irish ) Division 1914 – 1918.[vi]

While he lived at Woodville in Co. Longford, he abandoned his studies in his determination to help Ireland in her fight for freedom. (An Obituary of Captain Dermot MacManus in The Irish Times 1990) Macmanus made a disillusioned way into the IRA Dermot MacManus, for example, had had an upbringing which was traditionally British.  Disgusted with the British he wrote to Michael Collins after which he was arrested & incarnated in the Od Tower in the Dublin Castle.  In the absence of incriminating evidence, he was released.  Later he was introduced into the IRA by his friend Cathal Brugha however soon he was on the Auxiliaries Murder List in Dublin so had to go on the run.  He served under the name of Diarmuid Burke with Michael Brennan and Ernie O’Malley in Counties Clare & Tipperary.  Following the Treaty ‘split ’ MacManus he sided with the Free Staters, he agreed with Collins’s dictum of ‘Freedom to achieve Freedom.’   Macmanus was appointed Director of Training in succession to Major General Dalton.  He commended two ships from Limerick to take Kenmare from the sea.  In a letter MacManus stated that ‘Sean MaceEoin, the famous Blacksmith of Ballinlea was one of the most chivalrous fighters I have ever met with.’ (Dermott MacManus: An Appreciation in The Irish Times 1990) (Carlton Younger ).  Captain MacManus was appointed Director of Training Dublin Guards, IRA & GOC in Limerick, later Provost Marshall (Southern Command ) during 1922 /23.  During 1922 due to his military experience he was promoted to Commandant – General.  He was Commander at Portobello Barracks where he supressed a Munity of irregular Officers.  When the Four Courts was shelled, he opened fire with small arms from the Phoenix Park, he took over from wounded Joe Leonard then stormed the breach to take the area.  He disabled the IRA armoured car ‘The Mutineer’ by shooting its tyres with a Lewis machine gun.  Mac Manus commandeered the ships in Paddy Daly’s Kerry Landing of 10th August 1922.  He was Assistant Governor in Mountjoy Prison during 1923. [vii]

He married Martina Clarkin, his first wife; his second wife was Millicent.  He had a son Christopher with two daughters Margaret & Muriel.[viii]

He was associated with The Abbey Theatre in Dublin also The Irish Literary Revival. He was involved with Yeats Singe, Lady Gregory.  He studied Astronomy at Dublin’s Trinity College.

Captain MacManus was Honorary Treasurer of The Arts Cub in Dublin.  He reported that ‘The Arts Club has great history & was a real centre of art & intellect from 1915 to 1930 all through the vital 20’s.  (An Obituary of Captain Dermot MacManus in The Irish Times 1990 ) [xi]

According to Brian Hoban D. A. Mc Manus acted as Review Editor of ‘The Irish Statesman‘ during the early 1920s. [xii]

He moved to England where he spent his later years plus held a voluminous correspondence with his many friends.  (An Obituary of Captain Dermot MacManus in ‘The Irish Times’ 1990)

He was devotedly attended to during his illness by his second wife Millicent.  Previously he had paid annual visits to Killeaden.  During Autumn 1971 in a letter he wrote that ‘Alas, alas, I will not be over in Ireland at all this year.  This is the first such a thing has happened since I left India fifty – seven years ago.  It nearly breaks my heart.  Think of me as an exile – above all I wish to keep in touch Ireland for it is my Life.’  [xiii]

He delivered papers on the Irish Literary Revival to the Harrowgate Literary Society during 1965. (Brian Hoban ) [xiv]

In 1973 when the BBC produced a Documentary on W.B. Yeats they interviewed & filmed Captain Macmanus with regard to his copious notes. [xv]

An Obituary of Captain Dermot MacManus in ‘The Irish Times’  stated that the death has taken place at his home in Harrogate in Yorkshire of Captain Dermot Macmanus aged eighty – three who had been ill for some time.  (see ‘The Irish Time’s 1990 )  During 1990 Dermott MacManus: An Appreciation in ‘The Irish Times’: reported that it was entirely fitting that Dermott Mac Manus who died in Harrogate aged eighty – three should be buried in his beloved Mayo, close to his ancestral home at Killeadan. [xvi]

On a visit to Macmanus in Harrogate Valarie Strong (Macmanus was a first cousin of her grandfather) reported that ‘In these Days: A Story of Strong Women’ 2010 USA Xlibris Corp, page 275  that ‘Macmanus was a family Legend who had been gassed in the war & the last living link with W. B. Yeats’  During an interview about Killeaden with its ghosts: they subsequently paid a visit to his family home, but found ‘the house, a once lovely beautifully proportioned Georgian now derelict.  Peering through the windows was enough to know that to make it even more habitable would cost a fortune.  Taking care to walk around the thorn tree, we found the stable yard which we decided would be more manageable for restoration.  The box stalls & grooms’ quarters, carriage house & tack & feed rooms would easily convert into a charming small hotel.  After a miserable meal at the local pub where the only recommendation was a mural of the blind poet Anthony Raftery, we booked into an equally miserable B & B….poor Dermot.’ [xvii]

A colleague once said of the Captain that ‘he was a very brilliant man, a very modest man & certainly hid his light under a bushel.’ [xviii]

These lines from Cill Aodain Poet Terry Mc Donagh’s (Terry is Great – Grand Son of Bard Thady Conlon ) ‘Killedan and Nowhere Else’ Page 50 / No 21 remembers Dermot plus family. This enjoyable publication features the most amazing artwork throughout its leaves by the wonderful Sally Mc Kenna.

Note all following items are from Ricorso link:

Peter Liebregs & Peter van de Kamp, eds., ‘Tumult of Images: Essays on W. B. Yeats and Politics’ Vol. 3 of ‘The Literature of Politics, The Politics of Literature’  pages 13 -14.  During Proceedings of the Leiden IASIL Conference, Amsterdam: Editions Rodopi. B.V. 1995 Atlanta, GA. Introduction stated that ‘Yeats’s closest ally was Captain Dermot MacManus, ‘his head full of vague Fascims, probably got from me.’ (Letters, 815 ).  When MacManus introduced Yeats to O’ Duffy, the Irish answer to Mussolini! he claimed Yeats had called O’ Duffy an ‘uneducated lunatic.’

Sharyanne Mac Leod Nic Mhacla in her 2005 ‘Queen of the Night: Rediscovering the Celtic Moon Goddess’  Boston: Red Wheel, Chapter  ‘Tenth Lunation ‘  stated that MacManus was asserted that ‘the cure is walking bare-foot and bare-legged in a soft bog in a left-handwise circle (useful for decreasing magic ) for fifteen minutes daily for a three-week period.’

Macmanus is mentioned in Roy H. W. Johnson’s  ‘Century of Endeavour: A Biographical & Autobiographical View of the 20th Century’  2003 Dublin Academia Press as Dermot Macmanus was an ex- service student of UCD during 1919 / 21.  The author’s father – Joseph Johnson – was in contact with also spent time at Macmanus’s family home in Longford.  Johnson supported Macmanus in the latter’s capacity as prime mover of the Thomas Davis Society.  He was later commander of a West of Ireland Free State Army.  He served as Deputy – Governor of Mounty Joy Prison in Dublin. He was actively involved with Comrades Association later their transition to Blueshirts.  He was appointed by Lemass during 1931 to a Commission on a Report on the Civil Service.  During the 1960’s Macmanus contacted Johnson for support to publish a Literary critical work.

An Obituary notice also a photocopy of a typescript by Macmanus that detailed the suppression of the Portobello Munity during 1922 are held by Colin Smythe, who reprinted ‘The Middle Kingdom’ during 1959 & 1973.

‘The Shee’  in Ireland the World of the Shee (Sidhe ) that is of the Faeries of all spirits which are elemental & have never been human, was called ‘The Middle Kingdom.’   In ancient times the world of ‘faerie’ has been as much an accepted reality to the country people as has the normal material world around them.  During 1959 though belief remained widespread, the old knowledge of the organisation, of the ordered hierarchy of the classes and castes that compose the spirit world has almost disappeared.’ 1973 quoted in Donald E. Morse, et al. ’A Small Nation’s Contribution to the World,’  Colin Smythe 1993 Gerrards Cross: pages 7 /  8. [xx]

A description of the deserted Killeden House plus image may be seen on this site with a reference to Capt. Mac Manus’s ‘The Middle Kingdom.’ [xxi]

Captain Dermot Mc Manus is mentioned along with Emily & Lottie McManus at this link: http://www.castlebar.ie/Nostalgia_and_History/MC-MANUS-FAMILY.shtml

Kiltimagh honours its famous Captain on this site with a beautiful image of his ‘Faerie’ Publication: http://kiltimagh.ie/captain-dermot-mc-manus/

Capt. Dermott McManus is mentioned in the following links: http://kiltimagh.ie/2016/12/