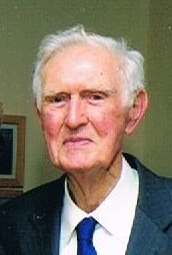 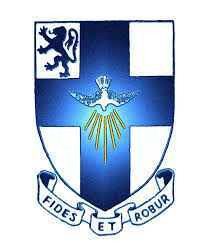 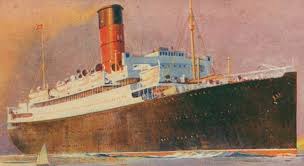 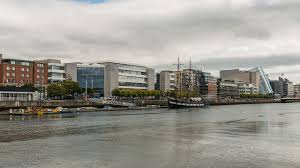 Johnny Mulloy, Carrowbaun (and formally of Shop Street), Westport, who died peacefully at home on September 26th, aged 94 years, was a noted Westport businessman and keen historian.  He was President of Westport Historical Society for many years and with his wife Sheila (a former editor), a regular contributor to this Journal.

Johnny was born upstairs over the family shop on Shop Street on August 6th, 1921, about three weeks into the Truce at the end of the War of Independence.  In addition to his parents, Frank and Monica, the new baby grew up with “Gentleman John” his grandfather. “Gentleman John” had been born in the house before the Famine, providing a living link to the past, and imbuing Johnny with a keen sense of History.  Like his Grandfather Johnny went on to become universally known as a gentleman, but in a very particular sense.  For Johnny, being a gentleman was not just about being polite, based on some notion of good manners.  Instead, it reflected an unending sense of curiosity about others and gratitude for the wonders and strangeness of the world.  Everybody was of interest to him, no matter who they were or where they came from.  This gratitude was his greatest gift and it inspired his curiosity, which led him to explore the sea and the land, the people and places all around him both near and far.  Even though he spent most of his life behind a counter, he was no fumbler in a greasy till, and his horizons were very broad indeed.  Coming to the house, you might find him reading something like Xenophon’s account of the Persian Expedition, following the journey of the Athenian warriors through Iran over two thousand years ago, with an atlas and magnifying glass beside him, deep in another world of space and time.

During his youth, a few key episodes shaped this outlook.  From about 10 years of age, he spent several summers fishing from a currach with Maidche Gallagher from Currane, learning all about the bay through the medium of Irish and realizing that manual labour really means using your head.  As he always used to say; “If you need to lift something heavy, ask a small man”.  In 1934 he went on a pilgrimage to Rome with the Catholic Boy Scouts of Ireland, sailing on board the RMS Lancastria.  On their return journey that stopped off in Tetouan in Monacco for some sightseeing when the 12 year old Johnny became separated from the group in the Old Town.  As he was wandering lost through the streets, a strong hand gripped his shoulder.  It was an old Moroccan man who successfully shepherded Johnny to safety, bringing him back to the train station and waiting with him for the group to return, despite the fact that they had no common language.  He often thought back with fondness to this old man and his kindness to a lost foreign boy.  When he left school in Blackrock College, he went to work in Dublin for the timber importers, T. & C. Martin’s, on the North Wall.  The men who worked for them on the docks had all grown up in the tenements, and many were regarded as little more than traitors for having served in the British Army during the First World War.  One day a carthorse pulling an empty dray bolted in a narrow alley.  Without hesitation, two of these dockers leaped forward without any concern for themselves and managed to grab the horse and calm it down, a display of bravery that deeply impressed him.  As a result, Johnny grew unwilling to simply toe the orthodox line and cherished independent thinking, trying to analyse every question on its own merits.

In 1940, his father got wind that Johnny was thinking of joining the flotilla to evacuate the refugees from Dunkirk, and ordered him home to join the family business.  This parental interference was probably justified as, during this evacuation, the RMS Lancastria was dive –bombed by the Germans at St. Nazare, killing several thousand refugees.  Years later, Johnny, fascinated by the possibilities of the internet, was able to watch footage of this historic event on YouTube.  Johnny gradually took over the reins of the family business, which had been established in the late 18th century.  It had undergone expansion over the years from the original shop, (now O’Connor Fashions) to include a shop and timber yard at the corner of Shop Street and the Octagon.  The business grew further in the 1930’s to Castlebar and briefly to Sligo, and Mulloy’s imported coal, timber, and cement and steel by ship through Westport Quay until the 1970”s.  They also sold hardware, furniture, kitchen-ware and “goods of all kinds” as the sign used to say, and the Irish Times once described it as “one of the last great shops”.  With the arrival of chain DIY stores the competition grew too intense, and in 1984 the timber yard and corner shop on Shop Street was sold to Seán O Connor’s SuperValu supermarket.

In the post – war period, he quickly became a central figure in the life of Westport, serving on the Harbour Board, as an Independent member of the Urban District Council and an active member of both Westport Rugby Club and Westport Golf Club.  He was also a member of the Westport and District Development Committee, whose initial aims were to achieve the ambitious target of 100 guest rooms in Westport and the road to Bertra Beach.

He married his beloved Sheila (née O’Malley, from Barna, Co. Galway) in 1949, and they went on to have eight children within eight years.  He instilled in his children a love of the sea and the landscape, and generated his own flock of seagulls, always whirling around him and crying “Why, Daddy, why?”  He was deeply knowledgeable about both local and global history, archaeology, geography, geology, and biology, such that instead of going to Google the grandchildren would simply go to Grandpa.  His knowledge of Westport was encyclopaedic, going back many generations built up through his own experiences, his contract through the shop and his love of the town.  He was always more than willing to share his knowledge, and loved finding out new things.

In 1995, the decision was made to finally close the family business (although it still carries on in name as the hardware department in Seán O’Connor’s.)  Johnny blossomed in his retirement, finally able to spend more time with Sheila, travelling, reading and writing, and getting to know his grandchildren and great-grandchildren.  They were heavily involved with both the Military History Society and the Irish Geological Association, and shared a mutual love of clambering around to look at ruins, stones, and fossils at home and abroad.  He and Sheila had a wonderful 64 years together, and following her death in 2013, he felt her loss very deeply over his last remaining years.  He still lived life to the full however, maintaining his gratitude for everything to the very end.  He lived his life as a life should be lived, and liked to quote T K Whitaker; “The secret to a long life is to chose one’s parents wisely!”

Johnny passed away on Saturday 26th September in the presence of his loving family.  He is mourned deeply by his children Frank (Dublin), Máire (Germany), Sheila (Westport), Eithne (Limerick), Evleen (Westport), Onóra (Galway), John and Michael (Westport), their spouses and partners, his grandchildren and great-grandchildren.  He is also mourned by his brother-in-law Brian O’Malley (Canada) and his wife Elizabeth, nieces, nephews, extended family, friends, neighbours and his wonderful carers.