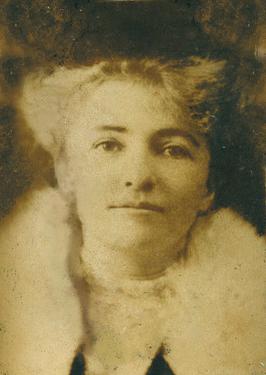 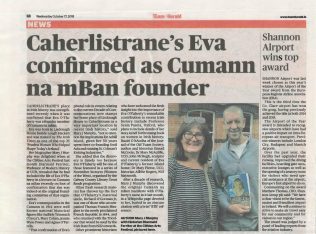 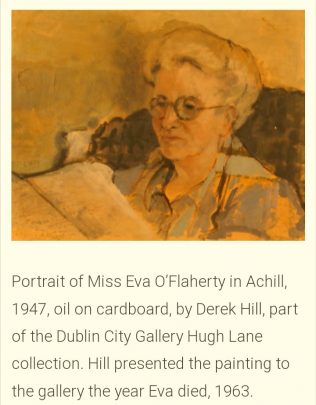 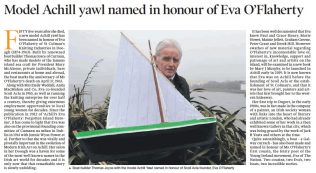 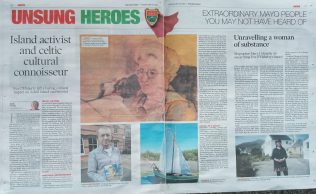 Eva O’Flaherty was an Irish nationalist, Parisienne model, entrepreneur, patron of the arts and London milliner who founded a successful knitting industry on Achill Island. She was also a major supporter of & patron to many of the artists who found their way to her Dooagh home on Achill during the first half of the 20th century, including the Belgian Imressionist Marie Howet (1897-1984). Paul Henry was there during her time as were the likes of Hilda Marsh Roberts, Percy French, Robert Henri, Estella Solomons, Letitia & Eva Hamilton, Nano Reid, Louis le Brocquy, Evie Hone & Mainie Jellett, as well as Grace Mitchell Henry, Stella Frost, Dairine Vanston, Stella Steyn, writer Patricia Lynch, Dorothy Blackham, Anne Yeats, Sean Keating, Charles Lamb, Frances Kelly, Micheal de Burca and – perhaps! – Jack B. Yeats too.

O’Flaherty was born to Martin Francis O’Flaherty and Mary Frances Barbara O’Gorman Lalor O’Flaherty, a strongly nationalist Catholic family, in Caherlistrane’s Lisdonagh House, County Galway. Her father, a substantial Galway land-owner & JP, was involved in the John Mitchel Treason Felony trial in 1848, for the defence. He had also been sent to the USA by John Blake Dillon in August 1848 as a ‘secret agent’ for the Young Ireland movement, to help raise support, finance & arms for the organisation.  Her mother, who died in Lisdonagh House aged 42, and who had had a large family of at least seven children before marrying her substantially older second husband, was the daughter of Daniel O’Connell’s colleague, Richard O’Gorman Sr. Her brother Richard O’Gorman Jr., Eva’s uncle, was also an important Young Irelander and a Judge in New York in the 1890’s, while  Eva’s maternal granduncle was Purcell O’Gorman, O’Connell’s ‘second’ for his infamous 1815 duel with John D’Esterre.

In her youth O’Flaherty lived in Limerick with her considerably older half-sister (Mary/May Quin), following her mother’s death in 1881, and her secondary schooling was in Mount Anville and Alexandra Colleges. When she had finished school O’Flaherty went to Paris to study millinery. It was there she met and became aware of people like Constance Gore-Booth Markievicz and Maud Gonne, and Eva subsequently opened a millinery shop in London c.1907 where she was also an active member of the Gaelic League & paid subscriptions to the organisation from 1900 onwards. There she knew of women like Min Ryan, Cesca & Edith Drury – later to become Senator Eileen Costello of Tuam – & was ‘mentored’ by the likes of Tuam-born Dr. Mark Ryan, an aquaintance of O’Donovan Rossa, WB Yeats & Arthur MacBride etc, and a senior influential IRB member.

From 1910 onwards O’Flaherty began making her permanent move to Achill where some years later she opened St. Colman’s Knitting Industries adjacent to her home. It seems that she had visited the island initially on painting trips, possibly around 1906. St. Colman’s was based in Dooagh and provided substantial local employment for girls & women of the area for over fifty years, an achievement never equalled since. Eva was also part of the founding core group of Scoil Acla in 1910 with Emily Weddall,  Darrell Figgis, Padraig O’Raghallaigh, Claud Chavasse, Colm O’Loughlainn and Anita McMahon. Unlike other founders of what is thought to be Ireland’s oldest summer school, O’Flaherty remained on the island for the rest of her life.

Figgis, a writer and author, was leader of the Irish Volunteers in Achill in April 1916, and apparently was visited by Jack B. Yeats whilst living on the island also. Figgis wrote to O’Flaherty while in jail in England, and she was connected too to other well known members of Ireland’s nationalist movement, including the likes of Sean MacDermott, Padraig Colum & Mary Maguire et al.  Her Quin family relations meant that Eva knew of Kathleen Daly Clarke, also from Limerick. By 1914 O’Flaherty was a member of Cumann na mBan’s Provisional Founding Committee (documented) with Jennie Wyse-Power et al, & was ‘active’ in Dublin during the Easter Rising. It appears that she may have been  part of the group known as ‘basket women’ who carried messages throughout the city by bicycle. She remained friends with many of her nationalist acquaintances for the rest of her life, women like Linda Kearns, Máire Comerford & Dr. Kathleen Lynn in particular. In 1963, shortly before her death, the priest and historian, Professor F.X. Martin, visited her on Dooagh & interviewed her about her republican/ nationalist experiences and connections.

After the rising O’Flaherty returned to Achill. Her life in Paris and London, where for a time she had a millinery shop c.1907, meant that she had made a significant number of connections in literary & artistic circles. As a result, people like the painters Paul Henry and Marie Howet and the writers Heinrich Boll and Graham Greene knew their way to her island door. Her Dooagh ‘salon’ was a focal point for literary, artistic, cultural and political figures, and Sean MacBride was in her home in the late 1940s, prior to the founding of Clan na Poblachta, as was Limerick’s Noel Hartnett.

O’Flaherty died on 17th April 1963 in Tuam’s private Bons Secours hospital (where she was attended by her youthful private nurse Mary Jo Noonan/now Timlin), just a few miles from her birthplace almost ninety years earlier in Caherlistrane’s Lisdonagh House, now being run by John & Finola Cooke as a high end guest house. President Eamon de Valera sent Senator Mark Killilea Sr. to give the funeral oration on behalf of the government, during which her extensive Cumann na mBan and other extensive lifetime’s activities were mentioned. She was interred in Donaghpatrick graveyard in her raised family vault (completely refurbished in 2013 on the 50th anniversary of her death, a move instigated by Caherlistrane’s Mary J Murphy and spear-headed by Brendan Gannon, Con McCole and Billy Connelly), her coffin draped with a tricolour, accompanied by military honours. Eva’s widely acclaimed biography was written in 2012 by Murphy who has made it her professional life’s work to pin O’Flaherty’s  remarkable forgotten story back onto the history map, front & centre,  where it belongs.  Murphy’s follow-up island book, published in 2020, received generous praise from both John Bowman and Joe Duffy on RTE radio, while prominent journalist & author Mary Kenny, named ACHILL PAINTERS as one of her top three books of the year.  Eva O’Flaherty’s vital role on Achill as an arts patron and enthusiast is front and centre in this book, as is the story if Belgian Marie Howet’s 53-year connection to the island. Aine Ryan of The Mayo News said that it was written with “tenacity and an open heart”, Books Ireland opined that it had “a poetic sensibility”, and Dan McCarthy of The Examiner concluded that the writing & its content had a “brilliance” to it. Marie Howet painted Eva’s portrait in Dooagh in 1929 & another portrait of O’Flaherty, also created in her island home, in 1947 by Derek Hill, is part of the Hugh Lane collection.

Moves are afoot to commemorate the 60th anniversary of Eva Mary O’Flaherty’s death in 2023, both in her Caherlistrane home place and on her beloved Achill Island.

Mary J Murphy is the author of a number of popular books: