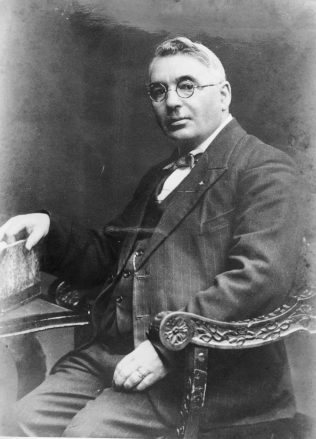 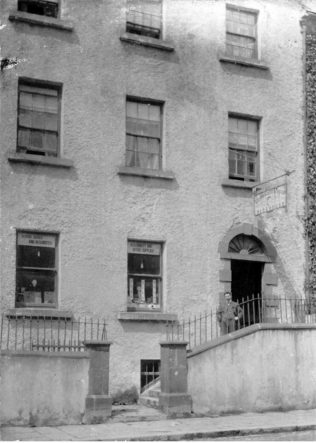 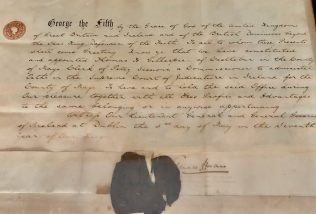 zoom
The citation from King George V of the appointment of T.H. Gillespie as a Clerk of Petty Sessions on May 3, 1916.
Tom Gillespie Collection 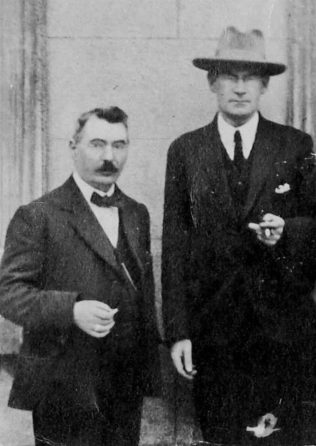 My grandfather, Thomas H. Gillespie, took over the editorship of the Connaught Telegraph in 1899, a position he held until his death on Friday, March 31, 1939.

Thomas H. was born in Castlebar, Co. Mayo during 1874.  His father was R. C. Gillespie with his mother’s maiden name being Canavan.  His brother was Richard  A.  Thomas H. received his early education in St. Patrick’s National School on Chapel Street under the guidance of the De La Salle Brothers, after which he emigrated to  Chicago, US while just a schoolboy, at the request of his brothers, who were then occupying prominent positions in the Windy City.

My great-grandfather, Richard C., was the first member of the Gillespie family to have connections with ‘The Connaught Telegraph‘.  Both Thomas H. and R.A., both ran the business following the death of Richard C. R.C. worked with Lord Frederick Cavendish after the paper was founded, linking the Gillespie’s with ‘The Connaught Telegraph‘  since its inception.

When James Daly took over the newspaper in 1876, R.C. was appointed Manager of the company. He worked there during the historic founding of the Land League by Michael Davitt and James Daly.

Sixteen years later Daly sold out his interests in ‘The Connaught Telegraph ‘ to R.C., putting the Gillespie family in charge of the publication for the first time.

Thomas H. returned to Castlebar during 1898 to represent the Chicago National Society at the ’98 centenary celebrations.  His brother R.A. convinced him to remain at home.  Though just 25 years old at the time, he was a man of the world, having spent several years prior to that in Chicago.

For close on 40 years he was editor of The Connaught Telegraph, a record in Irish journalism for an unbroken connection with a newspaper.  During his term as Editor the pages of the paper were employed unstintingly towards and for the betterment of the people of the county as a whole.  At all times and on every occasion he championed all good and national causes and the columns of ‘The Connaught Telegraph‘  he always freely handed over to those  interested in such causes as well as to those  who wished to spread uplifting ideals or propagate just and patriotic principles.

Eight years later (1924 ) he was appointed a Peace Commissioner for four of the five counties of Connaught, and subsequently was elected to the Urban District Council of his native town.  He was honoured by the Municipal Authorities Association, who elected him as one of the three representatives on the executive council of the body.  He was also a member of the Irish Master Printers Association and the Irish Newspaper Owners’ Association.  For many years T.H. was a member of the Castlebar branch of Fine Gael.  In conjunction with the local parish priest, Rev. Canon Lyons, T.H. was one of the promoters of the Castlebar bacon factory, later becoming Secretary, a position he held up to a few years before his death in 1939.

Local historian and former Town Council member, Noel Campbell, in his book, ‘A History of Castlebar Municipal Government 1613 to 2014’,  wrote of T. H: “The period 1911-23 was to pose extreme logistical and political challenges for the Castlebar councillors.  The decade began with a campaign of collective foresight and purpose led by Castlebar’s political leaders that resulted in decades of employment and regular income for dozens of families in the town.  “The leaders’ idea was to establish a cooperative bacon curing factory in Castlebar, which would be financed by the inhabitants of the town and its extended hinterland.  All authorities in supporting the venture.  “A.C. Larminie, J. Gilmartin and P. Higgins respective Chairmen of the UDC, guardians and Castlebar rural district council represented their bodies on public platforms pushing the idea to farmers.  “Perhaps the most energetic of all the organisers in driving the bacon factory plan was T. H. Gillespie. Gillespie visited the various districts in West Mayo where he secured important enthusiastic support from farmers who promised to feed the supply of animals the factory needed.  “The force of political and civic leaders that combined to make the bacon factory a reality was reminiscent of the campaign to establish a Flax Spinning Company in the town in 1864.”

Four of T. H’s sons – Tommy, Bernie, Alfie and Dick (my father ) – ran the newspaper, with Tommy as editor for more than 35 years.  A skilled linotype operator, Tommy’s editorials were ground-breaking, and he presided over the transition of the newspaper from hot metal to computerisation.

After Tommy’s death in 1985, Tom Courell from Ballina was appointed editor.  Following Tom’s untimely death in 1995, I took over the editorship on the newspaper’s birthday, March 17, 1996.  In the months prior to that I was involved with planning the building of new offices at Cavendish Lane.

For the following 18 years I remained in the editor’s chair.  Then, following the takeover of newspaper by the Celtic Media Group in April 2014, I retired, and Tom Kelly stepped into the editor’s office.