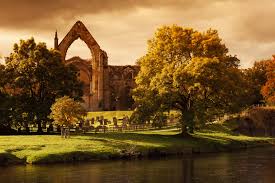 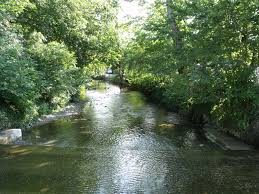 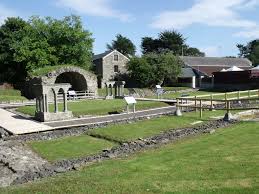 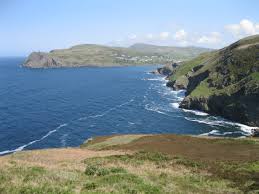 zoom
Coast of Isle of Man with Port Erin.
commons.wikimedia.org 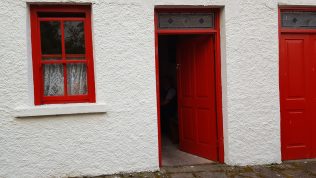 This man was a talented & a successful playwright also a novelist who is remembered in Co. Mayo  further afield today.  A short story competition is administered by the Kenny / Naughton Society to honour him is held annually in his native Aughamore in Co. Mayo.  [i]

On completion of his education he was employed in various positions such as a coal-bagger also weaver.  During WW2 Bill Naughton joined a Civil Defence Unit as a driver. [iv]

His first wife was Nan Wilson & they had three children.  When the marriage broke up, (she remarried twice)  Bill Naughton remarried Austrian born Erna Pirot who was wife, nurse, also guardian of his literary legacy later in life. (Paul Rogers January 6th 2015)  [v]

Bill Naughton produced several successful novels & plays with children’s books among them his first publication was A Roof Over Your Head  in 1945. [vii]

Other publications included One Small Boy  1957  &  All In Good Time  1964.   His Spring and Port Wine  was staged at the Octagon Theatre in Bolton Theatre during 1965 (the first of several of his plays)  He published an autobiographical trilogy On the Pig’s Back.  Then during 1987 an autobiographical excursion Saintly Billy, A Catholic Boyhood.   In 1988 Neither Use nor Ornament A Memoir of Bolton  from 1920’s was penned during 1995.  Bill Naughton’s Alfie was made into a film.  He wrote for the humorous Magazine ‘Lilliput.’  (Clenn Collins January 11th 1992) [viii]

He penned several plays & short stories: most famous of which is Alfie (1963), which was made into two films: https://openlibrary.org/authors/OL506465A/Bill_Naughton

Bill Naughton worked for the Television industry by contributing short stories & plays.  His play June Evening was televised by the B.B.C. during July 1960: nine months previous to the first edition of ‘Coronation Street.’ [ix]

He sold the rights to Alfie  then he & Erna moved to Ballasalla in the Isle of Man.  Bill Naughton’s autobiographical trilogy was written while he was in his 70’s: as an insightful humorous look at life, the last entitled Neither Use nor Ornament; A Memoir of Bolton  during 1995. [xi]

Bill Naughton’s demise occurred on January 9th 1992 when he was aged eighty-one.  He is buried at Rushen, near Port Erin on the Isle of Man.  His wife Erna acted as patron of the Kenny / Naughton Autumn School in Aughamore, Co. Mayo until her demise in September 2014. [xii]

His demise occurred in 1992 in Ballasalla on the Isle of Man: https://openlibrary.org/authors/OL506465A/Bill_Naughton

During July 2002 Bolton Council successfully purchased the Bill Naughton Archive that was offered for sale by Sotheby’s for 80,000 with assistance from the Heritage Lottery Fund, The Friends of the National Libraries, the Duchy of Lancaster Benevolent also the Bolton Institute. The Council provided funds for the cataloguing also the conservation of his material. [xiii]

An eighty-five seated adaptable studio within the Octagon Theatre is named after Bill Naughton.  His novels & plays feature on British school curricula. [xiv]

Bill Naughton is referenced on this site: https://www.britannica.com/biography/Bill-Naughton

Bill Naughton is referenced on this link: http://www.ricorso.net/rx/az-data/authors/n/Naughton_W/life.htm

This may be of interest: https://www.thenaughtonfoundation.com/

In his column Auld Stock  Johnny Mee’s article in The Connacht Telegraph’  8th September 2020 he remembered Bill Naughton as ‘A proud Son of Ballyhaunis.’ (page 26)  He was described by those who had known him as ‘an unassuming gentleman who never forgot his Irish roots or Ballyhaunis, he was proud of his birthplace.’