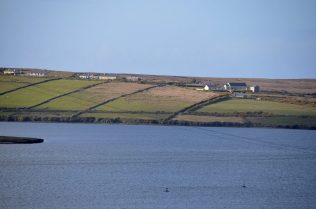 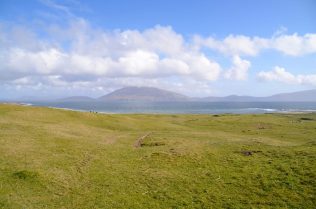 Several events have been proven to have occurred as this prophet predicted.  A Walking Trail around Belmullet town in north Mayo follows the prophecies in stone markings.

Brian Rua U’ Cearbhain was born during 1648 in Kilcommon in the townland of Inver, Erris, north Mayo.  He was a small farmer who had the gift of prophecy.  His documents written in original Irish script that detailed them were however destroyed. [i]

During 1678 a Fr. Paul Higgins instructed his parishioners not to associate with U’ Cearbhain but his reply was that the named individual would become a Protestant minister in four weeks!  He purchased cattle from an O’Donnell man who when requested payment was informed that the money would come from the sea: a short time later a ship with gold on board was wrecked along the coast!  (Fr. Noone & the Inver community The Lighthouse)  [ii]

Other prophesies from this man were;

There will be a house on every hill, and a bridge on every stream.

Paupers will be wearing shoes and children will speak English.

Roads of meal will be made all over Ireland and a half-penny candle will burn all the money in the country.

There will be a road across every bog and the roads will have ribbons of eyes.

A bridge will be made over the Abhainn Mor River at Bellacorick and it will never be finished.

People will be imprisoned without crime or cause, and it is a wise man that leaves the country.

Carriages travelling north and south will have iron wheels and the stones on the roads will be talking.

Carriages on wheels with smoke and fire will come to Achill and the first and last carriages will carry dead bodies.

The roads will have fences and the crossings will have gates to keep out trespassers.

There will be a year of plenty, followed by a year of grief and other few years and not many will survive.

News will travel on the top of poles faster than a hawk will fly from Dublin to Blacksod Bay. [iii]

During 1906 renowned Celtic scholar Michael Timony Lahardane of Crossmolina set out to collect all stories that pertained to this prophet in Tarngaireacht Brian Ruadh.   As part of a Millennium Project during 2000 these stories were translated into the English language. [iv]

Included in Philomena Cronin’s 1991 Traditional Cures and Gifted People (Cronin Publishers) she shares Red Brian’s unique prophecies in the second half with a translation of Red Brian Carabine’s prophecy.  Additional publications that reference the prophet are Noone Fr. Sean 1991’s When the Sun Sets  (Erris Publications) Nolan Rita 2001 Within The Mullet (Standard Printers)  [v]

Artist Aideen Barry involved with Changing Tracks Arts Project during 2014 referenced Brian Rua in her edition of Strange Terrain.   She produced a book also Utube videos.  She quoted his prophecy that ‘carriages with iron wheels, emitting smoke and fire‘ would carry death in & out of Achill:https://www.aideenbarry.com/strangeterrain#:~:text=Strange%20Terrain%20was%20the%20title,%2Cllister%20in%2C%20Mayo%20Ireland%2C

An RTE programme on 12th April 2021 with Enda Kenny referenced Brian Rua in connection with his prophecy on Westport Achill railway line: https://trakt.tv/shows/iarnrod-enda/seasons/1/episodes/2

This site states that all prophecies of Brian Rua came true.  Images feature on this site: http://visitbelmullet.ie/gowilddetails/tochar-bhriain-ruaidh/

The following may be of interest:

A story of triumph and tragedy The Mayo News 30th September 2014: https://www.mayonews.ie/

Pádraig Philbin senior engineer for Mayo County Council, pointed to a prophecy by the seventeenth century prophet Brian Rua U’Cearbhain who predicted that ‘carriages on iron wheels, emitting smoke and fire would carry coffins to Achill on both its first and last journey.’ When this prediction actually came true two hundred years later (with the first train on the Achill railway in 1894 carrying the bodies of potato pickers drowned on their way to Scotland, and four decades later the final train hauling the corpses of ten young Achill men buried alive in Scotland) it gave the railway a mythic allure, which made the idea of reviving it in the twenty-first century more credible: https://en.wikipedia.org/wiki/Brian_Rua_U%27Cearbhain