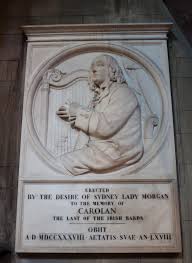 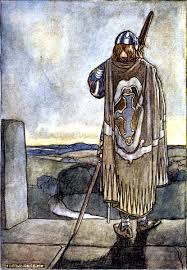 This celebrated bard & storyteller entertained the gentry as he travelled around the country with his songs & folktales.

A celebrated Irish storyteller & bard Cormac Ó Comáin was born during May 1703 at Woodstock, near Ballindangan, County Mayo. [i]

Cormac Ó Comáin known also as ‘Cormac Dall’  was born during May 1703 in Woodstock, near Ballinadangan, Co. Mayo.  Unfortunately he was blinded by a bout of smallpox while he was just a year old.  As he had displayed an early fondness for music a neighbour (who became a great patron) procured a professor to teach him the harp.  When this patron died he abandoned the instrument in favour of his natural singing voice. [ii]

He was married twice & had several children.  By 1796 as a widower he lived in Sorrelltown, near Dunmore, Co. Galway, with one of his married daughters.  At that time he still earned his livelihood led by a grandson or other lad as he wandered & related legendary tales or recited genealogies. [iii]

He was married twice: had several children.  He was widowed by 1796 when he lived with one of his married daughters. [iv]

He was appreciated for his versions of the songs of Carolan & James Macpherson’s Ossian poems.  He composed a few airs of quality (though they do not seem to have survived)   His own lyrical compositions attracted praise.  Among those known by name are ‘Lament for John Burke of Carrentryle’ (one of his best patrons)  [v]

He memorized songs from his own also neighbours firesides prior to becoming a celebrated Fir-Gealaighle.  He was led by a grandson or young person as he toured the country.  He was welcomed at weddings, special events or funerals as he related the old Irish legends.  He entertained the gentry by recounting genealogies, poems also songs.  He was proficient in O’ Carolan’s melodies & Ossian poems.  He composed a few musical pieces himself  i.e. ‘Lament for John Burke of Carrentyre’  but unfortunately his works have not survived. [vi]

According to Donnell Treacy Cormac Ó Comáin’s demise occurred at the age of one hundred & ten years. [vii]

The death of Cormac Ó Comáin  was reported to have occurred when he was aged one hundred & ten years. [viii]

Extracts from Walker Joseph C. 1796  Historical Memoirs of the Irish Bards (Dublin)  ‘His parents were poor and honest; remarkable for nothing but the innocence and simplicity of their lives.  ‘Shewing an early fondness for Music, a neighbouring Gentleman determined to have him taught to play on the Harp. A professor of that instrument was accordingly provided, and Cormac received a few lessons, which he practised ‘con amore’. But his patron dying suddenly, the Harp dropped from his hand, and was never after taken up:-It is probable he could not afford to string.  .’Endowed with a sweet voice and a good ear, his narrations were generally graced with the charms of melody.-(I say were generally graced, for at his age ‘nature sinks in years,’ and we speak of the man, with respect to his powers, as if actually a tenant of the grave.)  He did not … chant his tales in an uninterrupted even-tone; the monotony of his modulation was frequently broken by cadences introduced with taste at the close of each stanza’.  ‘The monotony of his modulation was varied by cadences introduced with taste at the close of each stanza.’  ‘In rehearseing any of Ossian’s poems, or any composition in verse … he chants them pretty much in the manner of our Cathedral-service’  Walker described his moral character as ‘untainted,’ he was ‘large and muscular.’  Also ‘But it was in Poetry Cormac delighted to exercise his genius.  As his Muse was generally awakened by the call of gratitude, his poetical productions are mostly panegrical or elegiac; they extol the living, or lament the dead.  Sometimes he indulged in satire, but not often, though endued with a rich vein of that dangerous gift.’  [ix]

Cormac Ó Comáin was referenced in Joseph Cooper Walker’s 1796 Historical Memories of the Irish Bards; intersected with anecdotes of etc. occasional observances on the Music of Ireland.  It was republished during 1818 as a two-volume edition. [x]

A portrait of Ó Comáin by William Ousley of Dunmore was reproduced as an engraving in Walker’s Memoirs. [xi]

Bigger Francis Joseph May 1907 editor 1894=1914 referenced Cormac Dall Ó Comáin in the Ulster Journal of Archaeology.   Illustration of Finn by Stephen Reid from High Deeds of Finn and other Bardic Romances of Ancient Ireland.  [xii]

Cormac Ó Comáin is referenced in Webb Alfred 1878 A Compendium of Irish Biography: Comprising Sketches of Distinguished Irishmen, and of Eminent Persons Connected with Ireland by Office Or by Their Writings. (M. H. Gill & Son) [xiii]