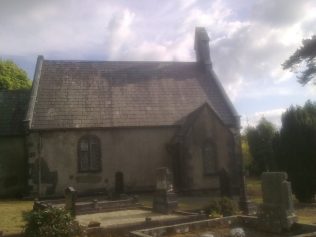 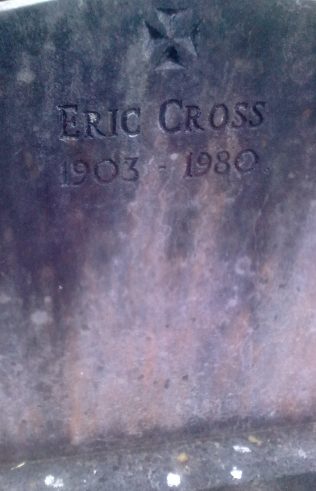 This man was an excellent mathematician, chemist also an academic.  His legacy has been his creativity in wood carvings (based on the Greek concept of the Golden Mean),  repairs to various Objet d’Art & numerous inventions also several essays etc.

Eric Cross was born during 1905 in Newry, Co. Down.  His father was a member of the diplomatic service: his mother (nee Mulloy ) was from Northern Ireland.  She volunteered in South Africa as a nurse during 1900.  Eric Cross was actually christened James; he grew up in Cheshire, England with one sister Sheila. [i]

His father was in the British diplomatic service & his mother (whom he once said had a very great influence on him) had gone to South Africa as a volunteer nurse during 1900. (Kieran’s Our City, Our Town, Cork Independent  17th  November 2011‘In the Footsteps of St. Finbarre (Part 275) The Golden Landscape.  [ii]

Eric Cross initially studied medicine at Manchester University then transferred to London where he studied chemistry.  He eventually graduated with a chemistry degree. [iii]

Eric Cross was employed as a researcher for fifteen years for various biochemical companies. According to the writer Benedict Kiely (d.2007) ‘Cross found himself working on methods of warfare for a large corporation and decided to become a writer instead.’ (Hourican Bridget,  Dempsey Pauric J. )  Extract from this link. [v]

A polymath Eric Cross devised a way of giving turf the durability of coal: he formulated a new mineral-like substance that resembled marble called ‘Magnasto.’ [vi]

While he was employed with ICI he invented the original OXO cube!  In Cork, Ireland during the war years he invented a type of turf briquette.  Eric Cross produced bicycle spokes from knitting needles.  He also mass produced leprechaun heads as an hand-craft project.  He invented all types of ingenious puzzles. (Kelly) [vii]

Cross returned during 1939 to Co. Cork.  He had renewed his previous friendship with Fr. Tim Traynor.  He joined a group that comprised of captain Sean Feehan who founded The Mercier Press  in Cork, Seamus Murphy a stone mason & sculptor Nancy Mc Carthy a fellow chemist from Douglas in Cork.  Later Cross purchased a horse-drawn caravan then moved to Gougane Barra. (Kelly) [viii]

During 1936 he moved to Ireland which he knew well from holidays. He lived briefly in Dublin. He allegedly bought a horse & caravan that took six weeks to reach Gougane Barra, Co. Cork, where he settled in his caravan.  Cross  used an hotel opposite St Finbarr’s Retreat for meals.  Thus he immersed himself in the life of the local community.  (Hourican ,Dempsey) [ix]

Cross returned to live in Ireland in 1936. He renewed an acquaintance with Fr. Tim Traynor (a curate in Sandycove Dublin )  Fr. Traynor also knew the tailor in Gougane Barra. [x]

During 1939 Eric travelled to Cork.  He became part of a group that included Seamus Murphy, stone mason & sculptor, Nancy McCarthy, another chemist from Douglas, Captain Seán Feehan, founder of The Mercier Press  also Father Tim Traynor.  Gougane Barra was frequented by the group: who were drawn to it by the famous couple (known as the Tailor & Ansty) Timothy & Ansty Buckley.   Later Eric Cross purchased a horse drawn caravan, then moved it to Gougane Barra in West Cork.  During an interview in 1976 Eric Cross recalled his first meeting with the tailor in Gougane Barra. ‘I was in Cork City and I hired a bicycle and set off, it was a fine summer’s day and by the time I got as far as Gougane Barra it was getting dark.  I met the Tailor on the way.  He was sitting on the side of the road outside his cottage.  He asked me in for a heat of the tea.  Something drew me to him, the broadness of the man must have impressed me in some way.  It is very hard to put a word on it but I had a sort of feeling that I knew him.’  Eric Cross’s publication was a result that he listened several nights to the Tailor’s stories. [xi]

While he lived at Gougane Barra during 1942 Cross published The Tailor and Ansty  in the Bell. The book was banned by the censorship board under de Valera’s Government.  This ban remained in place up to the 1960’s.  Eric Cross recalled in an interview in 1976 his initial meeting with the tailor.  Seanad Eireann held a debate on the controversy during 9th December 1942 vol 27: (http://historical-debates.oireachtas.ie/S/0027/19421209003.html)

Eric Cross defended this book in a letter to The Irish Press published on 15th October 1942 (page 3 ) with this  ‘ I wrote the book, The Tailor and Ansty about a man who has been my friend for many years.  The Manuscript, before publication, was read by many other friends of the Tailor.  When published it was received with gratitude by them and was reviewed historically by every Irish Paper without any exception or objection.’ This book was adapted for the stage by P. J. O’Connor during 1968.  Conal Creedon stated that a radio adaption Broadcast for R.T.E. had a cast headed up by Niall Tobin.  This is now regarded as a classic; it has premiered in The Abbey Theatre & throughout the country.  [xii]

Eric Cross moved north to Mayo to home-tutor children in Cloona Lodge outside Westport during 1950.  He remained until his demise thus became an integral part of the family life of the Kelly’s.  The daughters were fully home-schooled but the sons actually progressed to College where they excelled from his excellent tuition of mathematics.  Eric Cross adapted to rural life, walked the family pet, gardened & erected walls.  He assisted in the ‘Crios’ Cottage Industry weaving projects.  He also repaired china, pottery & metal products.  He derived great enjoyment from conversations with visitors in later years when Cloona Health Centre was established.  [xiii]

Following his graduation he penned a Chemistry Textbook.   He devised then published his Map of Time in 1968: that showed Ireland & world history from AD. 400.  Map may be viewed at this link: https://www.dib.ie/biography/cross-eric-a2239

Due to his love of chemistry, mathematics also philosophical opinions Cross penned  The Modern Advances to the Modalar Fly-Away Kit (MFLAK) to support Maritime Interdiction Operations.  He published  The Patriots (a Canadian historical play in three acts during 1956.  Cross’s Map of Time  was written during 1965, (this edition portrayed at a glance the Irish History & Events of its Peoples against the relevant European timeline )  During 1981 he produced The Late Operas of Antonio Vivaldi 1727-1738.    Again the following year he produced in conjunction with Giorgio Pestrelli The Age of Mozart and Beethoven.  Eric Cross’s last publication was Silence is Golden and Other Stories & Essays  during 1978. [xiv]

Over two hundred radio talks were broadcast by Eric Cross on R.T.E.’s ‘Sunday Miscellany.’  He contributed several short stories to the B.B.C. [xv]

Cross penned a further vast amount of essays but unfortunately these were unpublished at the time of his demise.  [xvi]

Eris Cross’ demise occurred at Cloona Lodge when he was aged seventy-two during 1980. He is buried within Knappagh churchyard a few miles from Westport.  [xvii]

A Radio Script from 1976 was published within The Clew Bay Historical  Journal  2008 vol 26 that depicted his encounter with stone mason Seamus Murphy.  [xx]

This link states that: ‘His career as a chemical engineer spanned the invention of synthetic marble and the making of knitting needles from bicycle spokes.  He is known for a book of short stories’ : http://www.newulsterbiography.co.uk/index.php/home/printPerson/335

The Irish Independent  29th August 1942 described Eric Cross as ‘a smallish, leanish young man, with blue eyes and a mop of fair wavy hair, invariably wearing flannels and a high-necked pullover underneath his sports jacket.’  [xxii]

In his introduction to the reprint of The Tailor & Ansty during 1964 O’Connor Frank noted that: ‘Tis a funny state of affairs when you think of it.  It is the tailor himself speaking.  The book is nothing but the fun and the talk and the laughter, which has gone on for years around the fireside.’  [xxiii]

An article on Eric Cross is referenced at this site: https://peoplepill.com/people/eric-cross

Publications that may be of interest:

This link may be of interest: https://www.researchgate.net/publication/236796254_They_Are_Not_Worthy_of_Themselves_The_Tailor_and_Ansty_Debates_of_1942

[i] Cathair na Mart Historical Journal of the Westport Society 2008