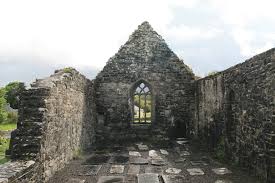 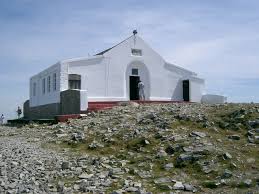 John E. Stephens was born on 6th January 1839 in Gurtapuntane, near Claremorris, Co. Mayo. His brother James was a curate in the Tuam diocese.

Following his national school education he worked in O’Connor’s business in Swinford.

John Stephens entered the juniorate at Blackrock College in Co. Dublin to continue his education at secondary level stage. While there he won prizes for ‘Diligence, Greek and Hebrew.’  He acted as prefect from 1866-1867.

John Stephens studied for the priesthood in Langonnet, France.

John Stephens was ordained during 1871.

At the end of one year in Blackrock Fr. Stephens requested a transfer to act as curate in his native Tuam diocese.

With his successful transfer Fr. Stephens served at the parishes of Castlebar, Aughagower also Monivea.

His spectacular achievement was the construction during 1882 of the first oratory erected at that era on the top of Croagh Patrick in Murrisk, Co. Mayo with the assistance of a former member of the society Fr. Michael Clarke (later a parish priest in Dublin)

A supporter of the Irish Land League Fr. Stephens was also close friend of Archbishop John McHale.  Unfortunately neither of these qualifications endeared him to McHale’s successor, Archbishop Mc Evilly.  In fact Fr. Stephens found himself without a post.

Circa 1886 his former fellow curate at Aughagower in Mayo Fr. Thomas Carr (by then Bishop of Galway) asked him to come as his secretary in Melbourne where he had been transferred as Archbishop.  With this new mission during 1888 Fr. Stephens requested permission to rejoin the congregation at Ballarat, Australia.  (congregation withdrew from Australia in 1892)

On his return to Ireland Fr. Stephens was appointed bursar at St Mary’s, Rathmines.

During 1893 Fr. Stephens was transferred to Rockwell College where he acted as director of the juniorate in the absence of Fr Louis Demaison (who had been seconded to other duties for a time)  When Fr. James Cotter in 1894 resigned the presidency:  Rev. Fr. Stephens was called on to assume the post, he agreed but with one condition that he would accept for a one-year term only.

His next appointment was as bursar under Fr. N . J. Brennan: they both supervised the construction of the chapel also other improvements in the College Plant.  The chapel was dedicated to the national apostle with a statue of St Patrick prominently displayed on the front gable.  Rev. Fr. Stephens retired as bursar during 1898.

Rev. Fr. John Stephens transferred to St Mary’s Rathmines where he acted as assistant bursar till 1903.

He retired to his Alma Mater at Blackrock for his final years.

From History of the Archdiocese of Tuam (vol 11: Croagh Patrick Hughes Harry) Dean D’ Alton wrote of Fr. Stephens: ‘and everywhere left the impress of his energy and zeal. With remarkable organisation he filled schools hitherto unfilled, established even in country districts flourishing sodalities, and the little church in Monivea, decorated and improved, was a lasting monument to his memory.’