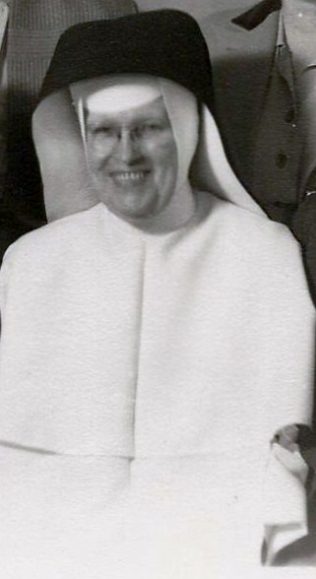 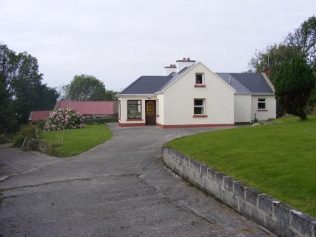 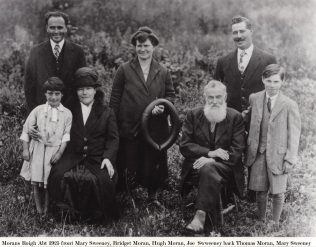 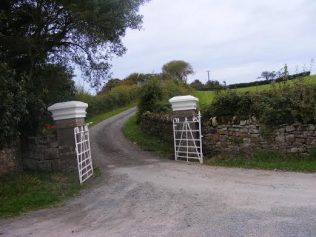 Delia Moran, as she was known, was born in Raigh, Newport Co. Mayo, Ireland, on June 30th 1891, the ninth child of Bridget Mc Loughlin and Hugh Moran. Before coming to America (at the age of 17 yrs.), she had received her education at Knockloughra N.S. and Newport National School where she took special courses in cookery and dressmaking. When she joined other members of her family who had settled in Chicago, she was well prepared to support herself.

She took a position as a housekeeper for a wealthy German family in a suburb of Chicago. Here she was entrusted with the keys of the house. She purchased the food, selected the menus, and supervised the other servants. Though she was a gifted cook, she cooked special dishes only for the banquets that were held occasionally in the home.

This family were most generous to her. She was free to come and go, and since she had always been drawn to the life of women religious, she went frequently to the nearby church to pray. The priest who was her confessor and counsellor knew the Adrian Dominican Sisters at Mount Saint Mary in St. Charles, Illinois, which was not too far away. One day he accompanied Delia to be interviewed by Mother Philomena Madden. Delia was in her 21st year and since she had no “American education”, she thought she could not be a teacher so she offered herself for domestic work.

Having come to a decision, she gave “plenty of notice” to the German family to whom she owed a great deal, and with whom she kept in contact with for years. Her entrance into the Adrian Congregation is unique, for she entered at Mount St. Mary and never saw Adrian until she was called there for her investiture. Her entrance is also unique because she chose to do domestic work, and at the same time brought the dowry of a wealthy young woman, gift money from her family, the German family, and her own earnings. Unique too, was her arrival in Adrian. She had not felt well in leaving the Mount St. Mary. When she reached Adrian she had to be put to bed. Her companion from the Mount (Sister Helena Carola Harnett) recalled that she had to have her appendix removed the day that her companions were receiving the habit, so she had a private reception when she was well. Sister Mary Brendan Ryan remembered that the candidates in Adrian had never seen her before, for she had not entered with them there.

Delia, “the Irish colleen” returned to the Mount after she had recovered her health and received the habit. The name Ruth went with her, a most fitting one, for she was willing to go wherever she was sent and to do whatever she was told to do.

Her work at the Mount was to take care of the little children. She looked after their clothing and all their needs with the greatest of care. Frequently she was called to the kitchen to prepare special meals with Sister Dionysius, a marvellous cook in her own right. Four nuns, who knew Sister Ruth and living at Maria Hall with her, gave one instance after another of her ability to work miracles at meal times. She could make marvellous dishes from leftovers. When food was scarce, she could stretch it into a “tasty plenty.” When asked how she accomplished the impossible she would say; “We had to do this at home in Ireland.” The only time she returned to Adrian in that period was for her profession on December 27th, 1916. Mother Philomena wanted her back at the Mount.

However, from time to time she substituted for one of the sisters in the classroom. It was observed that she was a natural teacher. Thus after four years of domestic work at the Mount, she was transferred to Adrian and given charge of second graders. She taught at the Academy for two years. Later she was assigned to St. James, Maywood, Illinois, where she lasted one year under the pastorate of the irascible pastor there. Perhaps her silent refusal to take his domination was too much for him.

From here, she was sent to St. Josephs, Braidwood, one of the poorest of places.The walls were falling apart in the convent and the school. Sister Ruth just kept looking at them and assuring the sisters that they would wait a few years before tumbling down. They loved her calmness and fun making. There was no end of hard work on that mission. Sister Ruth, always tall and slender, lost weight and was sent to Chicago, the stockyards area, where several Irish families worked and settled. She was not a” clannish” person but she admitted being most comfortable with the people from “home.” She remained there for four years teaching the primary grades. During one of those summers, she made her first home visit to Ireland.

At the end of five years, she was transferred to New Mexico. Her year here was a delight. As with her other placements no matter how difficult the place, she had the grace of bringing laughter. Having never known an easy way of living, she was able to cope and help others through a hurdle. She was at her best when times were hard. A lover of little ones, she reached the hearts of the Spanish-speaking children, and without speaking their language, taught them well. She laughed with them at their mistakes and they laughed with her at her own.

Many of the sisters who lived with her say that she had the art of Irish story-telling Her Irish brogue got her into funny situations, and she sent the sisters into gales of laughter as they listened to her telling stories. She laughed most heartily of all when stories were told about her. One such story that happened in Chicago in 1926 during the Eucharistic Congress. She knew Chicago, but Sister Charitina, her companion, did not know the city. They were separated in the crowds. The rain came down in torrents. Anxious about Charitina, Ruth walked for blocks in the rain. Consequently, all the starch came out of her veil and headband. She was dripping wet when she stopped a policeman and asked; “Sir have you seen anyone who looks like me?” He looked her over from head to foot, a sigh and smiled; “My God, Sister. No, I never saw anyone who looks like you!” The story went far and wide, and Ruth laughed more heartily each time the story was retold.

In the year 1951, she was appointed superior-principal at St. Mary of Mt. Carmel in Chicago, what was then an Italian settlement.  A kind, gracious woman, she could get along nicely with people, but she was not meant by nature to be an administrator or superior.  She preferred the kitchen to the office. In the course of the year she became ill and had to have emergency surgery. Benign tumours were removed but her general condition called for six months rest. She could hardly wait until she was teaching again. She was sent to St. Patricks School in St. Charles, Illinois, near the Mount from where she had begun her life as an Adrian Dominican. She taught the first graders part time and was at her happiest when with these young children.

Sadly, she died suddenly from a heart attack on January 16th, 1959, her office book open to the prayer she loved.

Sr.Ruth Moran’s people (The Hughie Morans) came from Co. Tyrone into the Burrishoole parish along with the Hamils and Currans and many other families they were flax-growers and weavers. They were dispossessed after the battle of the Diamond in 1796. They were wealthy and had an estate there. When they came to Raigh, Newport, the Currans and the Hamils were better off than the Morans. John Curran lived in a house belonging to Rev. William Stoney in Rockfleet; he may have been his agent. When James Hunter was shot in Newfield (1869) Mr.Nathaniel P. Simes who had bought part of the O’Donel estate, left Raigh and John Curran took it over.

There were three Hamil families in the Tithes of 1832 in Raigh, with a valuation of eight shillings and six pence for Michael Sr;  5 shillings for Michael Jr.  and 5 shillings for James.  They had disappeared by the time of Griffith’s valuation. No Morans appeared in Raigh in the tithes, but were there in the Griffiths Valuation as a poorer tenant having one acre and three roods. John Moran, Raigh m. Mary Curran on 7/10/1821 in Newport Chapel.  Sr. Ruth’s grand-father Hugh (b. abt. 1825) Raigh m. Catherine Anne Hamil abt. 1845. (Headstone Killeen Cem., Newport.)

Sr. Ruth’s father Hugh Jr. was a Fenian as was his cousin and neighbour John Curran. Hugh attended 1st meeting of the Land League in Irishtown (1879) which Michael Davitt helped organise but did not attend, Hugh won a prize in Irishtown for a verse.

‘’Here we are from Tiernaur.

Crushed down by cruel taxation,

With iron huts and government spies,

That have destroyed our nation.

Credit to Dominician Sisters and Sr. Ruth’s relatives in Chicago.