The Last Foreign Prelate of The Philippine Islands 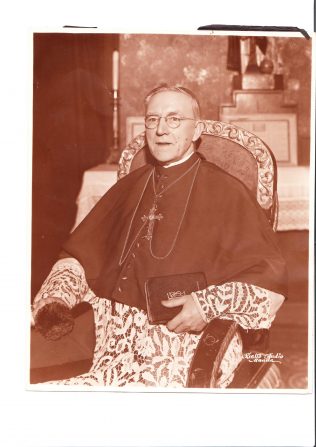 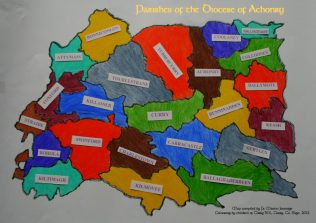 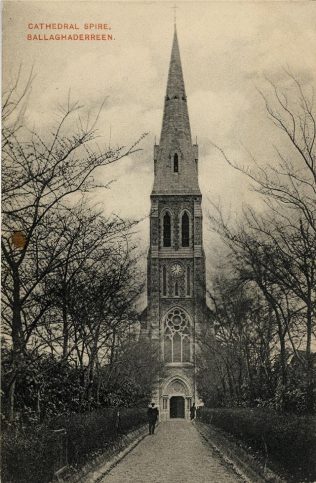 Seamus Ban O’Doherty:-grandfather of the future Archbishop of Manila, lived on a comfortable holding, relative to the times, in the townland of Lurga. His education, through the ‘Hedge-School System’ was of a standard that enabled him to speak both Irish and English and recite prayers in latin when people died. He was instrumental in the negotiations for local tenant-farmers with Charles Strickland, the local representative of Viscount Dillon, when the estate was surveyed in detail, and re-subdivided, shortly after the Great Famine. Most of the present holdings still survive, from that period, with the same family names. His son, Michael Senior became a teacher under the new system set up by the Education Act 1831, when the commissioners for national education was established by the Lord Lieutenant. This was the beginning of a country wide school building programme.

In July 1868 Michael O’Doherty Senior was married in the new Charlestown Church to a local school teacher, Julia Kelly. Having trained in the monitorial system, prior to training college, he worked at Turlough, near Castlebar, Cloonlyon and Charlestown, where his wife was a principal teacher also.

They had a family of twelve children; most of their names are inscribed on their family grave stone in Temple cemetery. Michael Junior was born in July 1874 and baptized at the local church in Charlestown, according to the records.

In 1892 Michael Junior was enrolled at St. Nathy’s College in Ballaghadereen, while his brother Denis went to Summerhill College and his brother Tom went to St Mary’s Galway. Michael entered Maynooth Seminary in September 1889 for the Achonry Diocese. He was followed three years later by his brother Denis for the Elphin Diocese.

On Tuesday 30 November 1897 Michael was ordained in the chapel of the Sisters of Charity, Ballaghadereen. That evening he accompanied his family by jaunting car to Charlestown and took the train to their present home at Rose Cottage, Kiltimagh. On 8 December he was appointed as a member of the staff at St Nathy’s College and also worked in the parish. In 1899 he became a curate in Swinford parish and the following year he was transferred to Foxford. Shortly afterwards, he was re-appointed to St. Nathy’s College. In June 1904 he was appointed Rector of the Irish College, Salamanca, Spain. For the next seven years he improved the living conditions of the College for the students  and studied for his Doctorate of Divinity in 1907. His father, Michael Senior visited the College following his retirement in 1909. There he spent much time researching the Irish diaspora in Spain following the ‘Flight of the Earls’ in 1608.

In 1911 the now Monsignor Michael was appointed bishop of the newly formed diocese of Zamboanga, in the Philippine Islands. He returned to Ireland for his consecration at St. Nathy’s Cathedral, on 3 September 1911. His colleague and neighbour Bishop Patrick Morrisroe was consecrated on the same day for the home diocese of Achonry.

He was then 38 years of age when he became a bishop and spend the next 38 years, until his death, at the service of the Church in the Philippine Islands. On his way to his new appointment he passed through the United States of America and spent some time in Philadelphia where his cousin Joseph Campbell-Doherty, an accomplished journalist, whose parents came from Lurga, hosted a fundraising banquet for him under the auspices of the Ancient Order of Hibernians.

The Philippine Islands were colonised by the Spanish from 1565-1569 following a mandate of the Pope and the King of Spain. Religious Orders followed the colonisers and Christianity took root over the next three centuries. Both Christianity and education molded these island people into a national identity. At the Treaty of Paris on 13 August 1898 Spain ceded the Philippines, Guam and Porto Rico to The United States.

On arrival in his new and impoverished diocese he spent some time in the Jesuit house as this was a newly created diocese and there was no house for the recently appointed bishop. He started off immediately to visit the remote periphery of the diocese by boat, horse and trekking. He created a good working relationship with the local establishment and within three years had established a hospital; though catholic in ethos, it welcomes the local Muslim population and all other creeds. The hospital was instrumental in reducing the local scourge of infant mortality arising from unhygienic practices. A central school was also part of his plan but this was overtaken by his next appointment on 30 August 1916 as Archbishop of Manila. He remained in this position until his death in 1949.

In taking up his new post he realised there was a great need for catholic schools, a catholic press, a native clergy and hierarchy, and lay involvement in the church.

Familiar with the struggle for national education in Ireland, the Archbishop was happy to support the public school system, on similar lines to those in Ireland. While this idea met with fierce opposition from within the church, gradually, it became widespread practice and has withstood the test of time.

Following a national Eucharistic Congress in 1929, he welcomed the 33rd International Congress in 1937. A catalyst for the transition of the islands from Spanish to American rule and finally to Philippino independence, he was granted full citizenship posthumously.

Lay Catholic Action, from the days of his grandfather, in Ireland, who said prayers in Latin at local funeral services in the absence of a priest, he welcomed the Irish Legion of Mary to the Orient. These lay people made a major contribution to human welfare during the Japanese invasion of World War 11. With the U.S.A. heavily involved in the war in Europe, the expansionist policies of Japan in the 1940s lead to an obvious attack on the Philippines;- a far flung outpost of the U.S.A.

Following the bombing of Pearl Harbour, Hawaii on 8 December 1941 and airbases in the Philippines a few hours later, the Japanese army entered Manila on 2 January 1942. The Catholic Lieutenant coronal of the Japanese army met with the Archbishop as they wished to involve the church on their side. When the request for political support was refused the Archbishop found himself under house arrest. In February 1944 his house was searched, his car taken and his secretary (later Cardinal Santos, his successor) was imprisoned. The liberation of the Philippines began in October 1944 and the Americans made a final assault on Manila in February 1945. On 14 November 1944 an American bomb fell on the Archbishop’s house as part of the liberation process. By this time, the house was evacuated and the Archbishop was sheltering in the Dominican house nearby. The Cathedral was destroyed and had to be re-built. Many of his priests were killed in the war, including five Irish Columban fathers.

Following the liberation by General McArthur, the Archbishop left for recuperation in U.S.A. He contacted Mayor O’Dwyer of New York who was a student in Salamanca at an earlier stage. Onwards to Ireland, he stayed with his brother William and the O’Doherty-Murphy family in Dublin. In the west of Ireland he stayed with his friend Bishop Morrisroe at Ballaghadereen and visited his relatives in Charlestown, Lurga, Kiltimagh  and Ballina. A special visit was paid to the homes of the martyred Columban priests: Frs. John Henehan, Louisbourg, Joseph Monaghan, Banbridge, Peter Fallon, Dunmore, Patrick Kelly, Tullamore, and John Lawlor, Cork. He performed several confirmation ceremonies that spring in the Achonry Diocese, including Charlestown, as Bishop Morrisroe was seriously ill. On return to his archdiocese he continued the restoration process and died on 10 October 1949 following a short illness.

The secular press newspapers were generous in their obituaries; they praised the archbishop’s work and the way he stood up to the Japanese during the war, calling it “his greatest hour”.

In the summer of 2008 the grandchildren of an Irish family who were orphaned in 1917 in Manila, visited Lurga in recognition of the special interest and care the archbishop took in their grandparents’ welfare, at a time of great vulnerability.

Having visited Manila in 2006 the writer met the present incumbent, Cardinal Rosales, who was generous in the praise of his predecessor and very appreciative of the visit. It was also an unique experience to pause at the tomb of a native Charlestown ancestor in the crypt of the main Cathedral. The motto over his tomb reads: “Delectabor in Domino’- I will take delight in serving the Lord -.

He was the longest serving Prelate in the Philippines Islands since the arrival of the Spanish missionaries in the fifteen hundreds and the last foreign prelate. His name is recorded in the history of the church in the Philippine Islands where many Irish people still serve the native church in co-operation with a native clergy as missionaries and development workers. A plaque to his memory was erected in the Church in Charlestown in October 1985 where he was baptized, on behalf of his niece Mrs Freda O’Doherty-Murphy (now deceased). The gospel message “Go teach all nations” was answered by the Archbishop in his life of service to the local and universal church with unfailing generosity. His work lives on as a challenge and a support to all who support their local church in the various ways life calls members to participate.

For more information you can contact the author Pádraic O’Doherty