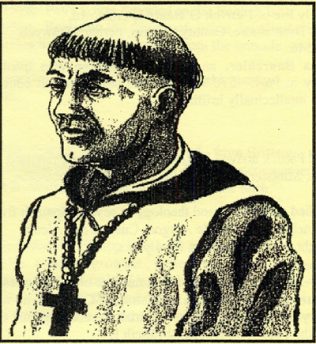 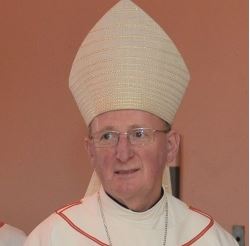 Patrick O’Healy was born in Dromahair, County Leitrim between 1543 and 1546. Nothing much is known of his early life other than he joined the Franciscans at a young age, in Dromahair.[i]

Four years after his profession, he was sent to the Spanish University of Alcala, [ii] where he surpassed his contemporaries in sacred studies. He went on to study philosophy and theology at several Spanish Friaries, including Molina de Aragon, Cuenca and San Clemente, where he taught for four years. He also ministered in Portugal, where he first met with an Irish Nobleman by the name of James Fitzmaurice.

Back in Spain, around 1574, he was approached by a number of Irish clerics, led by the Archbishop of Cashel, Maurice MacGibbon to join them in trying to secure help for the Irish to rebel against the rule of the Protestant Queen Elizabeth 1. Summoned to Rome, he was promoted in July 1576 to the Bishopric of Mayo by Pope Gregory XIII. At Paris he took part in public disputations at the Sorbonne University, amazing his hearers by his mastery of patristic and controversial theology, as well as of Scotist philosophy. In May 1578 Bishop O’Healy visited Madrid with James Fitzmaurice to further the Irish cause but soon afterwards, was reported to the English, by a fellow priest. Realising the danger of being involved with Fitzmaurice, he distanced himself from the crusade.

Little is known of him from this time until his arrival in Ireland in 1579 other than a letter written by him to Cardinal Galli, in Rome in March 1578, which testifies to the fervour of his faith.

and all I have, should need there be, for the safety and exaltation

of the Apostolic See, for the propagation of the Catholic faith, and

the spread of the Christian religion.’

Betrayed to the English

In autumn 1579, Patrick sailed from Brittany to Ireland, to take possession of his seat in Mayo Abbey. His travelling companion was Conn O’Rourke, a Franciscan Friar of noble birth. They came ashore as Askeaton and sought hospitality at the castle of the Earl of Desmond.  Unfortunately, the earl was not at home but his wife, Eleanor, while receiving the two clerics, also betrayed them to the English and three days later they were taken into custody by Captain James Goold and transported to Kilmallock, which is about twenty miles from Limerick city, and where they were imprisoned. [iii]

There, Bishop O’Healy was questioned by Lord Justice William Drury, who was President of Munster at the time. Patrick refused to acknowledge Queen Elizabeth I as head of the church, and when questioned about plans involving the Pope and King Phillip II of Spain for invading Ireland, he made no answer, and thereupon was delivered to torture. As he still remained silent, he and O’Rourke were sent to instant execution by martial law. The execution took place outside one of the gates of Kilmallock on 13th August 1579. Bishop O’Healy was the first Bishop to be executed by the English.[iv]

The diocese of Mayo was once again incorporated into the Archdiocese of Tuam in 1631 and has remained so to this day.[v]

On September 27, 1992, Pope John Paul II beatified Bishop O’Healy alongside sixteen other Irish Catholic Martyrs. The beatification of Bishop O’Healy was commemorated in the parish of Killenummery and Killery by the celebration of mass in the ruins of Creevalea Abbey by the Bishop of Ardagh and Clonmacnoise, Bishop Colm O Reilly.

Bishop Tom (affectionately known as the Blue Bishop because of his fanaticism for Everton FC) took his title of Bishop of Mayo because of his Irish mother, and has visited Mayo Abbey parish twice since his appointment.