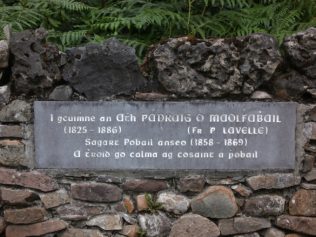 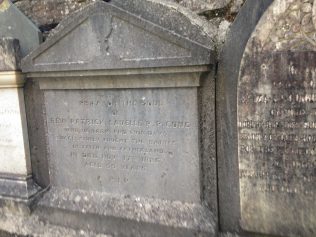 The Obituary of my Great Grandfather in the Mayo News in 1907, states that “one of the best notable members of his Westport family was the celebrated orator, writer and Patriot, the late Fr Patrick Lavelle”.  This encouraged me to research this charismatic Irishman.[i]

Fr. Pat Lavelle, also known as the “Patriot Priest of Partry” was well recognised in his time worldwide for his Fenian support and patriotic revolts against attempts to convert the Irish tenants from Catholicism.   He was also a rebel within his religious community, as the then leader of the Catholic Church in Ireland, Archbishop Paul Cullen condemned his Fenian activity.

Fr. Patrick Lavelle was born in 1825 in Mullagh, (at the back of the Reek), near Lecanvey, the son of Francis Lavelle, a farmer and Mary McManus, a native of Louisburgh. He had two brothers Francis who later became an editor of the Freeman’s Journal and shared his brother’s Fenian sympathy and who died at a young age in an accident. He had a sister Mary who married a McNamara. [ii]

Patrick’s primary education was like many young children at this time, at a hedge school. He became a student in St. Jarlath’s College in Tuam, in 1840 and in Maynooth in 1844. He was ordained in 1851 and was appointed Professor of Philosophy in the Irish College in Paris. Patrick did not get along with the rector of the college, Dr. Miley due mainly to the latter’s support of Archbishop Cullen in Dublin, who disapproved of Fr. Lavelle. He was eventually expelled from the college and returned to Ireland, where he was appointed Parish Priest of Mayo Abbey by Archbishop of Tuam, Dr. John MacHale, who would remain a supporter of Fr. Lavelle and whose arch enemy was the afore mentioned Paul Cullen. [iii]

Fr. Lavelle was only a short while in Mayo Abbey as Archbishop McHale was becoming concerned at a Church of Ireland Archbishop Thomas Plunkett and his sister Catherine’s attempts to proselytise the tenants in Tourmakeady and Partry, and felt that Fr. Lavelle would be the man to challenged this threat. He appointed him parish priest of Ballovey in 1860.[iv]  By the time that Patrick Lavelle had arrived in Partry the Plunketts had evicted approx. 104 tenants while increasing the size of their holdings. Plunkett also bought George Moore’s lands when the latter became bankrupt. Fr. Lavelle was responsible for bringing attention to the methods the Proselytisers were using to coerce their poor tenants from their catholic faith. Fr. Lavelle was involved in many court cases against the Plunketts, one where he and his brother Francis were suspected in encouraging locals to assault a scripture reader and others where he represented various tenants when they stole or destroyed property of their landowners. Fr. Lavelle also brought rev. Goodison to court claiming rev. Goodison drew his pistol on him. These court cases against the tenants who reacted violently against Plunkett often attracted tenant protestors and the landlords had to be escorted to the trials for protection. [v]

The Plunkett’s and their scripture readers were encouraging the tenants to send their children to the three new Church of Ireland schools they had erected in the area, under the threat of eviction and also the offer of land and employment to their “loyal” tenants. Catherine Plunkett was known to be a souper, which was a common method of evangilsing in those days where food was offered to starving tenants. John McHale considered Patrick Lavelle to be the ideal adversary to provide a vigorous opposition to this activity because of his revolutionary writings e.g. “The Irish Landlord Since the Revolution”, which suggested that the English had no rights to the land which they took from the Irish. [vi]He had travelled all over Europe and India, Persia and China and wrote of the manner in which these countries treated property owners. His writings were read worldwide at this time and his turbulent activities and numerous cases were of interest to people at the time of the troubles in Partry, Tourmakeady and Ballinrobe.

The catalyst for the end to the war of Partry was when the Plunkett’s evicted 17 families, 68 people from their lands and demolished their houses in 1860. Lavelle used his contacts in various newspapers worldwide and the Plunkett’s were scandelised for these cruel actions. Fr. Lavelle was the winner of this war and the Plunketts moved to live in Tuam, however when Archbishop Plunkett died he was buried in Tourmakeady in the Church Of Ireland on the shores of Lough Mask.[vii]

When things settled down in Partry, Fr. Lavelle remained dedicated to the cause of Fenianism and still campaigned for release of Fenian prisoners and became involved with Amensty. He continued to write and become embroiled in court cases and involved in various elections. He was in debt and when the Parish Priest of Cong passed away, Fr. McHale promoted him to this job, as this was a more affluent parish, the Landlords here being generous benefactors of the local parish. It is written by many historians that the “fire” seemed to go out in Fr. Lavelle belly at this move to Cong, whatever the reason, maybe his new relationship with the landlord class, especially lord Ardilaun.[viii]

He had some family tragedies during this time, his brother Francis was killed in Dublin in 1862. His brother Thomas was stabbed in New York in 1868 and also in 1868 his mother was evicted from her home in Mullagh.  Some writers have found it extraordinary that this patriot priest did not become active during the Land War in Mayo, except to make a few appearances at Land League meetings where his contributions were weaker than previously.

The original Cross of Cong was held in the Augustinian Abbey and was donated by a the rather hesitant previous priest Fr. Waldron because of fear of theft or damage to this precious jewel of the National Museum Of Ireland. A story is told that Fr. Lavelle drove to Dublin and “rescued” the cross to bring it to its rightful home as he believed, but he was apprehended by the police before returning.

Fr. Lavelle died in Cong on November 17th 1886, there is a plaque in his Memory, behind the newer church, it would have originally being on the gable of the old Parish Church.

The Inscriptions reads; “Pray for the soul of Patrick Lavelle, who in dark and evil days, fought the fight of faith and fatherland”

[vi] The Irish Landlord since the Revolution, Fr Patrick Lavelle (in archive.org)