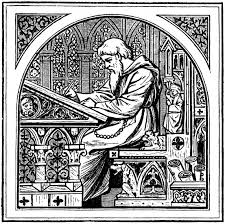 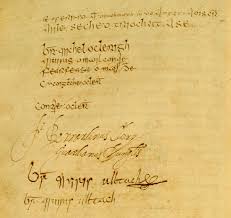 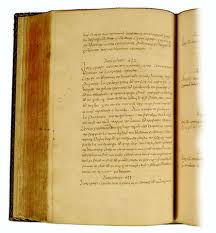 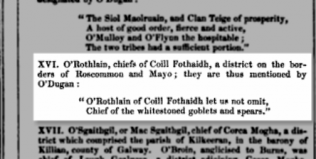 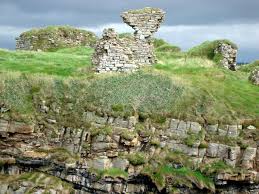 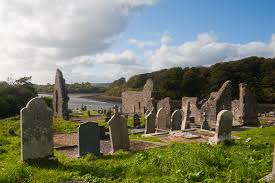 Not much material is available about this scholar apart from his work during the 1600’s.  He was a very accomplished Scribe.  He deserves to be remembered for his writings & poems.

The O ‘Cléirigh family lived at the princely residence of the Oilamhs, bards & Antiquarians of the people of Tirconnell: the illustrious family of the O ‘Cléary’s Kilbarron Castle at Creevy near Ballyshannon in Co. Donegal.  Perigrine O ‘Cléirigh was a son of the celebrated scholar Lughaidh O ‘Cléirigh also a cousin of the Chief Scribe Michael O’ Cléirigh.  At the time that the Annals of the Four Masters  written Perigrine O ‘Cléirihgh was the head of the family also the official chief of the Ollamhs of Tirconnell. [i]

Brother Michael O ‘Cléirigh (on leave from the monastery in Louvain) noted antiquarian & poet had an idea that he could produce a new all – encompassing book by collecting ancient vellums of local annals that would incorporate the reigns, deaths, genealogies of the Irish High Kings also the provincial kings, distinguished families, chiefs or men of science, historians etc.  From 22nd January 1632 to 10th August 1636 along with Cu Choiridhe O ‘Cleirigh, Fearfeasta O Maol Chonais & the chief compiler Brother Micheal O ‘Cléirigh of Crevy that project was completed under the patronage of Feargal O’ Gadha M.P Coolaire, Co. Sligo. [ii]

Perigrene O ‘Cléirigh participated in the following projects led by Brother Míchéal Ó Cléirigh  The Genealogies of the kings and saints of  Ireland  from 4th October to 4th November 1630 in the Franciscans’ House at Athlone.  Also the Book of Invasions  from 22nd October to 22nd December 1631 at their house at Lisgoole, Co. Fermanagh.[iii]

The Chronicle of Medieval History of Ireland  included entries from the Deluge 2242 up to 1676 A.D. & were written in the Irish language.  Penned at a Franciscan Friary near the Drownes River, Co. Leitrim initially called the  Annals of the Irish Kingdoms  it became known as  Annals of the Four Masters.   Two autographical copies were produced: one for Fearghai O ‘Gadha with one for the Franciscan Brotherhood at the Irish College of St. Anthony at Louvain. [iv]

According to Gallan Tom  Annals of the Four Masters  referred to the timeline of the age of the world to the Deluge 2242. [v]

The Franciscans had an house of refuge beside the River Drowes, just outside Ballyshannon in Co. Leitrim.  It was believed that  Annals of the Four Masters  with several other annals were complied there. [vi]

Works attributed to O ‘Cléirigh were a poem to Mary a sister of Red Hugh O’Donnell (now housed among the Phillips Manuscripts at the National Library of Ireland)   He also penned the Life of Aodh Ruaidh O’ Domhaill.   The O ‘Clery books are referenced in the Will of Cocugry that remained for numerous years within Co. Mayo.[vii]

Following the completion of the The Annals of the Four Masters it was believed that  Perigrine O ‘Clérigh moved to the West of Ireland.  A copy of those were used as a source by Dubhallad Mc Fhirbhisign in Galway during 1679. [viii]

This site believed that Perigrine O Céirigh’s is the ‘Cuco[. . .]’  that penned the will that was pasted into the back of RIA MS 23.D.17.  Writing in 1664 at Corr na hEilte the testator leaves his soul to God, his body to nearby Burrishoole Abbey also his books to his sons Diarmaid & Seaán. [xi]

In Perigrine O Céirigh’s will at Curr-na-hEilte, (dated 8th February 1664)  he stated that ‘I bequeath my Soul to God Almighty and I charge my body to be buried in the Monastery of Burgheis Umhaill….’  [xii]

During 1846 noted historian & poet Owen Connellan transcribed the Annals of the Four Masters  into the English language.  Volumes were annotated by Philip Mac Dermott M. D. (who created the first family location map of Ireland)  During the years of 1848 to 1851 noted scholar John O’Donovan translated the The Annals of the Four Masters  into five-large volumes sets.  Those were later translated into seven slimmer volumes. [xiv]

The four scribes are honoured on a memorial bridge over the River Drowes at Mullinaleck in Kinlought, Co. Leitrim. [xv]

Their lives are celebrated in the annual O’ Cléirigh School held at Rossknowlagh Friary in Co. Donegal. [xvi]

In Donegal town the four scribes are commemorated with a ten metres high obelisk erected during 1938 with their names inscribed at The Diamond. [xvii]

A cycling club also a GAA club (founded in 1932) were named after these four scribes. [xviii]

It is believed that descendants of the Cleary & Clarke families live at Brockleagh, Glenhest also Burrishoole. [xx]

A memorial plaque adorns the ruins of the O ‘Cléary’s Kilbarron Castle at Creevy near Ballyshannon in Co. Donegal. [xxi]

Copies of these manuscripts are held within Dublin at these buildings:

The National Library of Ireland: https://www.nli.ie/

Copies of The Annals of the Four Masters  were donated from the Charles Haughty private library to the National Museum of Ireland-Country Life at Turlough Co. Mayo.  (Gratitude is extended to Museum staff for their assistance)

A list of published texts may be viewed at this link: https://celt.ucc.ie/publishd.html

Irish Script On Screen-ISOS project at the Dublin Institute for Advanced Studies has high-resolution digital images of the Royal Irish Academy’s copy of The Annals of the Four Masters:  https://www.isos.dias.ie/ [xxii]

Publications that reference Perigrine O ‘Cléirigh include the following;

Mac Shamais OSF Bro. Angelo in the Notes on Cuchoigcriche O ‘Cléirigh, One of the Four Masters  in Cathair na Mart Historical Journal  2001 No.21 (pages 27-44) [xxiii]

Cunningham Bernadette reviewed  the  Annals of the Four Masters; Irish history, kingship and society in the early 17th century  in  Studia Hibernica no. 37  (pages 257-260)  This edition was reviewed by Mhathúna Deirdre Nic 2011.  It may be downloaded at this link: https://www.jstor.org/stable/23645650

Mc Carthy Daniel P.  2008 The Irish Annals: their genesis, evolution and history  PDF may be downloaded at this link: https://www.academia.edu/31991496/The_Irish_Annals_their_genesis_evolution_and_history_2009_

Holohan Frances submitted an article to the www.ourirish.org site on iCan network National Museum of Ireland website of Abbey & District Heritage re  The Book of Duniry’ as one of the Four Masters Micheal Ó ‘Cléirigh transcribed the life of St. Ceallach from the book with its link to Kilnalahan Monastery at this link: https://abbey.galwaycommunityheritage.org/