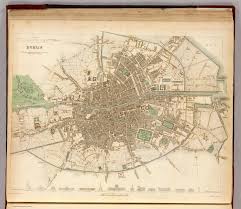 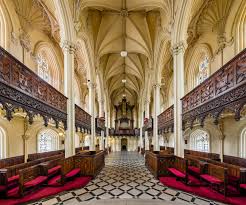 Bro. Francis Mc Alpine spent his life assisting students, bargaining, collected debts.  He was in fact a tremendous asset to his community.  He was a fluent Irish speaker.

John Mc Alpine entered Blackrock College on 30th June 1862 as a result of picking up a piece of newspaper being blown along the road on which there was an advertisement published by Père Leman looking for vocations.  He accepted this as a call from God: he was received with welcome by Père Leman.

John McAlpine was professed at Blackrock on 8th December 1864.  He spent his life in serving with his community.

He is interred within Deansgrange cemetery in Monkstown, Dublin.

It was noted at Bro. Francis Mc Alpine’s funeral that he with Fr. Ebenrecht (whom he had acted in concert for most of his life) both arrived at Blackrock in the same year of 1862 but they died within a few months of one another.

Tribute from Fr. John T Murphy (a life-long friend) ‘likened him in his solidity, poverty and mortification, to the Irish monks of old.  He never spent a halfpenny on himself, rose early in the morning and went fasting on his errands in order to be able to receive Holy Communion at some church later.  He was totally devoid of self respect, even in his manner of dress.’  He also stated that ‘Fr Leman saw in this young man fine material for a religious and treated him from the start with affection and confidence.’

Rev. Fr. Larry Healy, who knew him for a life-time penned this tribute: ‘The function assigned to him was that of Commissioner.  For fifty years he held this position.  Almost every emergency called for Bro. Francis.  From the importance of the post and the ability with which he discharged his duties, it may be claimed for him that he was one of the props on whose support the college rested.  The sturdy figure of Bro. Francis was soon as familiar on the streets of Dublin as it was in the college, and there was not a warehouse, and hardly a tiny shop, in which he was not known.  It was known that he made large purchases not only for Blackrock but for other colleges and institutions also.  It was also known that he had a vexing genius for bargaining.  He would tramp through the city all day, in all weathers, heedless of hunger and fatigue.  However late the hour at which he returned, he would perform the Stations of the Cross.  He collected outstanding debts.  For priests or students going abroad he arranged details with the travel companies.  Foreigners coming to Blackrock were often met at Liverpool by him.  At the outbreak of the great fire in the college during 1874, while others were debating what to do, ‘Bro. Francis mounted a horse and galloped to the city, roused the Lord Mayor, got his permission to summon the Dublin fire brigade, and so prevented much damage.’  He operated from a postal address in Grafton Street with the use of his family name, while collecting outstanding debts.  His fluency in Irish stood him well on at least one occasion; when ‘at a market the instructions given by the wife to her husband in making the bargain were also being followed by Bro. Francis unknown to them both.’