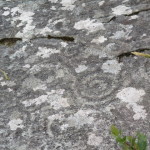 The Boheh Stone is located east-south-east of the summit of Croagh Patrick.  Known locally as ‘St. Patrick’s Chair’  it is one of Ireland’s national monuments.  Rock art is regarded as the most comprehensive example of its type in Ireland, yet distinct from similar sites in Britain or on the Atlantic seaboard of the European Continent.  It is situated within an area occupied by buildings & dwellings.  It would appear to be a natural outcrop but was described by Kinahan G. H. during 1873 as a ‘pile of stones’  in a field.  He stated that ‘a large flat stone covers most of the surface of the pile; of the stones under it, some are lying flat with others on edge or end, but all form a solid mass which might easily be mistaken for a natural heap.  The markings occur on several of the stones & consist for the most part, of variously sized cup-shaped hollows, in places combined with circles, or part of circles.’   Boheh Stone is situated on the west side of sloping ground with an unrestricted view westward.  The flat top of the stone slants at a maximum of about 2.5 above the surrounding ground, then extends horizontally for about four centimetres  The inscribed markings are on the top-side face. Bracken Gerry stated in his article during 1992 that to stand near the Boheh Stone & to view Croagh Patrick to the west as the summit of an apparent pyramid is to be convinced of a relationship between the stone & the mountain.   He noted during 1989 that on appropriate dates at the summer solstice the sun set at an azimuth to north of the summit of the mountain, while the horizon point of sunset at the winter solstice would be far to the south, at the ridge of the Sheaffrey Hills.   Boheh Stone with its  alignment indicates a connection with the dates of sowing & harvest times.  Longitude 9 33 13 4 W, latitude 53 44 50.93 N.  (Bracken G. C. & Wayman P. A. A Neolithic or Bronze – Age Alignment for Croagh Patrick no. 16  (pages 54-61) includes sketches with images) [i]

6.5 kilometres  south-south-west of Westport behind a house on the west side of a narrow by-road to the east of Boheh Lough & Westport-Leenane road lies a roughly circular outcrop of rock known as ‘St. Patrick’s Chair ‘ with petroglyphs.  It is covered with several cup-marks, concentric rings also maze-motifs over an area of three metres across.  On two days annually 22nd April & 2nd October the sun rolls down Croagh Patrick to the west when observed close to this sacred site.  Several images by Ken Williams feature  on this website. (Sheet 31) (7th April 2009)  [ii]

This stone is one of the finest examples of Neolithic art both within Ireland & Britain.  Dated to the same era as the carvings on the Newgrange, Dowth & Knowth monuments in Co. Meath.  Carvings are mainly cup-marks enclosed by two circles with a small number of keyhole motifs.   Boheh stone is located along the pagan route that stretches from Rathcroghan in Co. Roscommon to Croagh Patrick in Co. Mayo.  Both the ancient paths along with the Boheh stone were later Christianized: these are now known as Tóchar Phádraig & St. Patrick’s Chair.  Historian Bracken Gerry finally uncovered the rock’s mystery when he undertook a case study of the site.  He discovered that on the 18th April & 24th August when viewed from the Boheh stone the sun sits atop Croagh Patrick.  Instead of passing behind: sun appears to slide down the mountainside hence the term ‘Rolling Sun.’   It is believed that the dates of the phenomenon signify the beginning & end of the growing season. [iii]

Boheh Stone is one of the finest examples of Neolithic rock art within Ireland.  It has been declared a national monument.  Petroglyphs date from the late Stone – Age to the early Bronze-Age.  During 1989 a local Westport historian Gerry Bracken discovered a connection between the stone & the mountain.  He noted that from the Boheh Stone site on the 18th April & 24th August the setting sun appeared to roll down the northern shoulder to disappear behind Croagh Patrick.  According to tradition 24th August is St. Bartholomew’s Day (the first day of Autumn & Harvest season) whilst the 18th April was selected to mark the sowing season by Ireland’s ancient citizens. [iv]

Boheh Stone lies ten kilometres south of Westport also seven kilometres from Croagh Patrick.  It has been declared a national monument.  Slabs on the west side of sloping ground faces west with the Shreaffy Hills to the southwest.  Viewed to the west-north is the symmetrical profile of Croagh Patrick. This stone is covered in cup & ring markings.  A large flat stone covers most of the surface of the pile of stones while stones underneath lie flat with several on the edge or at the end. During 1989 the connection between the stone & mountain with the setting sun was noted.  Further observations during 1991 / 1992 referenced the setting sun as it appeared to follow Croagh Patrick’s slope on the north side.  The dates of the phenomenon 18th April signify the first day of planting crops whilst the 24th August date refers to the harvesting of same.  (Berni O ‘Malley) [v]

The townland of Boheh in Co. Mayo contains a remarkable example of prehistoric rock art. This Boheh Stone dates from the Neolithic period 4,000 BC to 2,500 BC.  It is a large natural outcrop known as ‘St. Patrick’s Chair.’   Spread over four kilometres on its surface are approximately two hundred & fifty individual markings.  These take the form of Isolated cup & rings with archaeological motifs.  Several of the petroglyphs bear similarities with those in Newgrange, Knowth & Dowth in Co. Meath.  Weather permitting one may be treated to a prehistoric equivalent of an amazing light show.  If one stands at the Boheh stone site between 22nd / 24th August or 18th April, then looks lest the sun appears to sit right on Croagh Patrick’s peak.  It then appears to roll down the north side of the conical peak thus reveals the ‘Rolling Sun’  phenomenon.  An actual image features on this site dated 24th August 2018.  [vi]

The Medieval pilgrimage road Tóchar Phádraig that runs from Ballintubber Abbey to Croagh Patrick passes through the site of the Boheh stone.  Hidden away behind high hedgerows lies a natural outcrop of rock flecked with quartz stones known as ‘St. Patrick’s Chair.’   Spread over its 4.2 square metres surface are over two hundred & fifty individual carved petroglyphs. These are of isolated ‘cup’, ‘cup  &  rings ’ also ‘keyhole motifs’  that form an impressive sight when viewed under correct climatic conditions.  Carvings are mostly located on the horizontal & southern facing sloped surfaces of the rock itself.  No carvings appear on the western side that faces the mountain.  A small ‘cross’  is carved on to the rock near its top on the eastern side.  The ideal way to view the phenomenon is looking west.  Over two metres at one point the rock takes the form of a ‘flat-like’  feature at its highest point.  Possibly the flat horizontal surface of the rock ‘chair ’ may have been an altar.  One is treated to a prehistoric ‘light show ’  if one stands at the Boheh Stone on the 18th April or 24th August when the sun appears to sit right on the top of Croagh Patrick.  It then appears to ‘roll ’ down the north side of the conical peak.  An interpretive sign at the location refers to Boheh as Bhoth Sheilhe (the Skinhide Hut)   The earliest recordings on the nineteenth century ordnance survey are ‘Both The’  while O ‘Donovan stated it as ‘Both Theith’ (cosy booth / hut / tent )   There are links to view Ken Williams Gallery, meglithomania gallery also the modern antiquarian gallery (vox hiberionacum 18th April 2013)  Several images with a google street view that also includes a video by Dr. Oliver Whyte from 18th April 2013 are available to view on this site.  [vii]

An ancient pilgrimage path from Ballintubber Abbey to the summit of Croagh Patrick passes this rock.  Westport researcher Bracken Gerry catalogued monuments within the Westport area when he discovered an unusual site. This site lies east of Croagh Patrick, it is known as ‘St. Patrick’s Chair ‘ or the Boheh Stone.  Monument is covered with cup & ring marks. He also discovered that the angle of the mountains side matches the declination (setting angle) of the sun at this time & place to produce the phenomenon ‘The Rolling Sun.’  [viii]

The Boheh stone is located behind an abandoned house approximately three hundred metres off the N59 eight kilometres from Westport.  Monument is a large rock circa two metres in height with over two hundred & fifty individual petroglyphs carved onto its surface. Mainly cup markings enclosed by one or two circles with a small number of keyhole motifs were believed to have been created between 3,080 BC to 2,000 BC.  The phenomenon called the ‘Rolling Sun of Boheh’  is a reference to the beginning & end of the growing seasons annually.  [ix]

A national monument the Boheh stone or ‘St. Patrick’s Chair ‘ lies 6.4 kilometres south-south-west of Westport in Co. Mayo.  Rock art was believed to have been carved as early as 3,800 BC.   Boheh Stone is one of the finest examples of rock art within Ireland.  Several cup & ring marks with keyhole  motifs adorn its surface. It is a possibility that two hundred & fifty petroglyphs were carved in total.  The Boheh Stone is flecked with quartz.  The ‘Rolling Sun’  phenomenon was discovered by historian Bracken Gerry during the period 1989-1992.  During 2014 a new panel was also discovered by historian Michael Gibbons. [x]

A very detailed article with illustrations, graphs & map by Maarten A. M. van Hock The Prehistoric Rock Art of the Boheh Stone, Co. Mayo  is published in Cathair na Mart Historical Journal no 13 1993 (pages 1-15) with a  photo by Frank Dolan of archaeologist Gerry Wash, assistant Kieran also Mary & Don Gibbons on whose land the Boheh Stone is located inside the journal cover. (Journal No 15 1995)   Van Hock published The Keyhole-Pattern in the Prehistoric Rock Art of Ireland & Britain  (pages 15-25) that described the Boheh Stone as one of the most profusely-decorated open-air rock art sites within Ireland & Britain. Twenty-four keyhole motifs area carved amongst the hundred or more cup-and-rings. [xii]

Several images posted to Irish History, Photography  on 23rd August 2015 by Lyons Dr. Jane may be viewed at this site:  https://www.from-ireland.net/photography-boheh-stone-mayo/

This publication may be downloaded at this link: https://www.academia.edu/17144766/VAN_HOEK_M_2001_The_Geography_of_Cup_and_ring_Art_in_Europe_PRIVATE_PUBLICATION_Oisterwijk_The_Netherlands

YouTube by Matthew Kelly may be viewed at this link: https://www.youtube.com/watch?v=KNWx3vbRp94