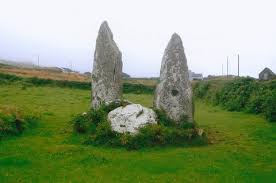 zoom
One of Ireland's Monuments
https://commons.wikimedia.org/wiki/File:Stone_monument_of_up_to_4000_years_old_in_Ireland.jpg

Four main types of megalithic monuments are located within Ireland.   Three hundred to five hundred chambered cairns, four hundred wedge tombs, one hundred & ninety examples of dolmens also four hundred court cairns existed.  At least two hundred are listed as unclassified monuments.  The sixth group are called Linkardsleun cists.  Courts & dolmens are believed to be the oldest type followed by passage graves from 3800 BC onwards with wedges from the Bronze Age.  Wedge tombs may be located within clusters of other types of monuments.  Dolmens were discovered near to streams in valleys: they may have been boundary markers.  They range in size from ten tons at Carromore to an estimated one hundred tons at Brownville in Co. Carlow.  Court tombs may be in various shapes & sizes.  Greevykeel was possibly the best example of the great twelve central courts.  Megalithic chambers were artificial graves constructed from free standing structures of large slabs that aided the stabilization of the monuments. It defined the monument from a distance also created a viewing platform to survey the horizon.  Neolithic art was usually found on passage graves.  The graves were often oriented to the sun, moon, or another heavenly bodies perhaps even to a nearby landscape or monument.  Several sites have external features such as standing stones, stone setting, round boxes, stone boxes or cists.  Two monuments; Cairn F at Carrowkeel & Cairn L at Loughcrew have standing stones within their chambers.  Heapstown cairn by Lough Arrow in Co. Sligo is Ireland’s fourth largest cairn.   A photomontage by Goran Burinhult of the Circle 26  excavation at Carrowmore with an image of Creevykeel monument in Co. Sligo as well as several sketches or images are featured at this link. [i]

The earliest dates of construction for western European megaliths were found within western Ireland.  A group of archaeologists led by Swede Stephen Bergh at the Carrowmore complex discussed their findings during late 1970’s to early 1980’s.  Bergh returned to the site from 1944 to 1966 when new radiocarbon evidence supported the earlier findings; Tomb No. 4  had the oldest date.  Croaghhaun in the Ox Mountains produced five thousand, six hundred charcoal samples.  Samples taken from a stone socket in Primrose Green; Tomb 1  provided a date of 6400 BC: much earlier than anywhere else within Europe.  Five dates from three various tombs pointed to activity on the sites between 6400 BC. & 4600 BC.  The Boyne Valley Complex is dated from 3500 BC.  That site contains over sixty percent of all Europe’s megalithic monuments.  The great Neolithic temple at Knowth contains more than a quarter of Europe’s entire monument’s collections. The Lia Fail of Tara (Irelands ancient High Kings Coronation Stone) provides proof of Ireland’s importance to its ancient religion. [ii]