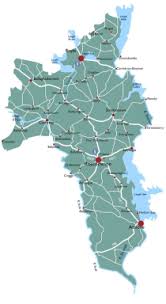 Ó Broin Tomás’s Celtica  29 199 (pages 393-401) in A Dictionary of Celtic Mythology  describes the following information: ‘The Irish name for the ancient coronation stone reputed to sing, or to utter a shriek, when a king willed by destiny sits upon it. Conn Cétchathach [of the Hundred Battles] was the first to sit upon Lia Fáil and foretell the future; he saw how many of his line would occupy the kingship as well as the coming of St Patrick. Just which stone is the true Lia Fáil has been a matter of much contention; as the Irish antiquarian George Petrie (1790–1866) observed, ‘It would be difficult to find a monument of antiquity with which so many national associations can be connected.’    Lia Fáil may be (1) identical with the phallus-like Fál described by the Dindshenchas as being found at Tara from pre-Christian up to medieval times. The pseudo-history Lebor Gabála [Book of Invasions] speculates that the semi-divine Tuatha Dé Danann brought Fál with them from northern Germany or that the Milesians brought it with them from Spain. (2 ) An Irish stone at Tara that was taken to Cruachain in Connacht centuries ago. (3 ) An Irish stone standing at Tara until the rebellion of 1798, when it was moved from the ‘Mound of Hostages’ to ‘Cormac’s House.’   Made of granular limestone not found in the area, this stone is 12 feet long, 6 feet of which stands above ground.  It is the most obviously phallic monument from early Ireland. (4) The stone raised at ‘Cormac’s House’ in 1798, now marked with the letters ‘R.I.P.’ may originally have served another function at Tara. (5) The Scottish Stone of Scone. Scottish historians from Hector Boece (1465-1536) have argued that while the Lia Fáil is of Irish origin, the Fál of the Dindshenchas, it was taken from either Cashel or Tara to Dunadd in Dál Riada for the coronation of Fergus mac Eirc. In 846 the Scottish king Cináed mac Ailpín [Kenneth MacAlpin] moved it to his capitals, first Forteviot and later Scone, where it was used in Scottish coronations until 1296 when it was seized by the English. And despite being recovered by Scottish nationalists in the mid-twentieth century, it lay under the English coronation chair until 1996, when it was returned to Scotland.’  [i]

The Coronation Stone called the Lia-Fail of the Irish traditions has a reference that ‘There it was placed upon the Sacred Hill of Tara: the ‘Fatal Stone’ or ‘Stone of Destiny.’  (Chronicles of Eri Trinity College, Dublin)  [ii]

A large stone in front of Clonalis House is called the ‘Coronation Stone‘.   It was transported from Rathcroghan in County Roscommon to the present site.  The High Kings of Ireland were crowned upon this stone.  An indentation like a footprint on the top of the stone  is believed to be where each king put his foot into during the ceremony.  The new king symbolically married the soil over which he was to rule by this sacred stone that in fact acted as the king’s bride in the ceremony known as ‘Banais Ri’  the King’s Marriage.  According to Mrs. Pyers O ‘Conor-Nash’s entry in Sybil Connolly’s publication In An Irish House  1988 (Weidenfeld & Nicolson (London.)   Felim O ‘Conor was one of the last people to be crowned King of Connacht at this stone.  He was killed during 1316 at the Battle of Athenry between de Burghs & the de Birmingham’s.  This stone was probably used to inaugurate thirty O ‘Conor kings.  (This site features a beautiful image of The Coronation Stone also provides a detailed resume of the family & house’s history )  (16th October 2020) [iii]

O ‘Conor family were direct descendants of the last traditional High Kings of Ireland. Possibly their demesne at Clonalis was the last remnant of the ancient Kingdom of Connacht.  Clonalis House is now home to the twenty-seventh generation of the O ‘Conor’s.  This family have a rich history of delivering eleven previous High Kings of Ireland also twenty-six kings of Connacht.  The coronation inauguration stone of the O ‘Conor Kings is still in situ at the front of this house. [iv]

The coronation stone or inauguration stone of the O ‘Connors is still visible at Clonalis House.  According to Gaelic tradition of both the Irish & Scottish clans when a king was inaugurated: He symbolically married the soil over which he was to rule.  A sacred stone was in use for this purpose as it acted as the kings bride.  The ceremony was known as ‘Banais Ri’’ or the King’s marriage.  The stone at Clonalis was possibly in use at the inauguration ceremonies of up to thirty of the O ‘Conor kings.  Ceremonies took place at Carnfree near Tulsk in Roscommon approximately twelve miles from Clonalis on a hill that overlooked the five counties of the Kingdom of Connacht.  It was highly ritual: performed in front of the bishops, abbots also the sub-kings of Connacht.  One part of the ceremony required the king to put his foot in the footstep carved into the top of the stone. The greatest O ‘Conor King was Turlough Mór O’Conor who was High King of Ireland during the twelfth century AD. [v]

The coming of the Tuatha Dé Danann to Ireland with these enigmatic objects was a fantastic arrival according to Lebor Gabála.  ‘In this wise they came, without vessels or barks, in dark clouds over the air by the might of Druidry.  They landed on a mountain of Conmaicne Rein in Connacht.’  (10th January 2019) [vi]

This site has information re. Clonalis House as the ‘ancestral home of the O ‘Conors of Connacht.’   This family are direct descendants of Connacht’s traditional ruling dynasty & in the twelfth century AD, of Ireland’s last High Kings.[vii]