Rural Childhood in the 1950s

A Trip Down Memory Lane 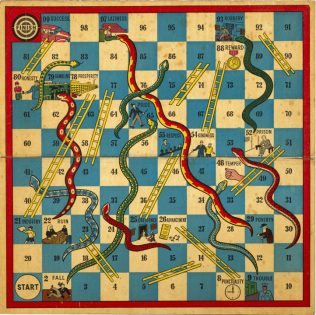 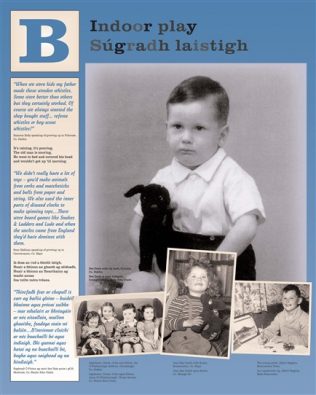 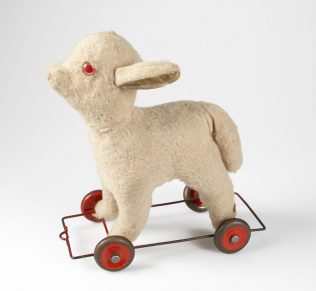 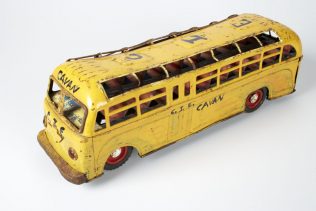 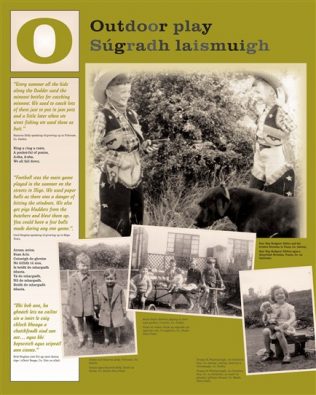 In the rural Ireland of the 1950s, people observed a traditional daily pattern of life, resembling that of friends and neighbours. Children played games and learned new skills at school and from each other.  Many left school in their early teens and entered into adult working life, leaving the innocence of childhood behind.

Newborns were welcomed with knitted garments

Children were born into families where having many siblings was common: it was understood that it was part of the responsibility of older children to take care of the younger ones. Women were increasingly attending hospital to give birth but home births with the assistance of local women were still widespread. Family and neighbours welcomed newborns with gifts of knitted garments. The giving of a silver coin was believed to ensure that the baby would not endure poverty and would reach old age. Religious badges and medals were pinned around the pram and the cradle to protect the child. The ultimate protection of the Christening was usually within a week or so of the birth and unlike today most mothers did not attend as there was a ceremony called Churching which had to be undertaken before they were permitted to attend religious ceremonies.

In general, monetary wealth was rare but there was a certain financial equality among friends and neighbours. People were resourceful and ‘made do’. Children always found ways to amuse themselves and were inventive too. Nothing went to waste that could be used to create games and toys and general amusement. Matches, corks, quills, pebbles, straw, flowers, rags, clock spinners, rope and wood – with imagination and a little skill – could create all sorts of playthings. Twigs and branches in the right hands provided catapults, whistles, pop-guns and spinning sticks. The latter were used to spin tops carved from a wooden thread-spool. A piece of rope could create a simple swing and a hillside could become a slide. A wheel or used tyre was a toy as imagination is the mother of invention.

Dog-eared books were read and re-read

Dolls, balls, marbles, yo-yos, board games such as Snakes and Ladders and Ludo, dominos, wooden building blocks and books were common features of a 1950s childhood. Unlike today, there was less emphasis on having the latest toy. It was simple to play ‘mammies and daddies’, ‘cowboys’ and ‘shop’ with very little. Sharing and handing down comics, books and toys was the norm. Battered looking dolls, teddies and soft toys passed among siblings, dog-eared books were read and re-read and the home-made often replicated the shop-bought. Doll’s clothes were seldom purchased. A Crolly or rag doll came with a perfect outfit and any extras were made at home. A small box could become a doll’s bed and diminutive furniture was crafted at home or locally.

Comics and trinkets were sought after

The shop-bought toys, paint-sets, balloons, books, comics and trinkets were sought after and much-appreciated. Balls were sometimes purchased but they could be homemade from paper, wool or a sheep’s bladder. Fishing for minnows using jam jars, bottles, nets and traps was a popular summer activity at local streams. These, along with captured butterflies and insects might then be used as bait for catching bigger fish. Berry and fruit picking was another late summer activity for making jam and preserves. It was often the responsibility of children to collect firewood and help with turf-cutting together with jobs around the home and farm.

Children were less supervised then and spent much of the day playing outside, not returning home until darkness fell or luckily for tea when their tummies rumbled.

Hand-me-downs and patches were the norm

Walking to a local school with family and neighbours was customary and few knew any different. Bare-footedness was common in the summer and wellingtons and leather boots were patched, heeled and passed on. New clothes might be made or acquired for Christmas, Easter or a special occasion. There were short trousers with braces for boys and smocks and pinafores for girls. Clothes were worn for longer as washing was not done as frequently as nowadays. Hand-me-downs and patches were the norm with garments being let in and let out: there were the everyday clothes and then there was the Sunday best.

Saturday night in most homes was bath night so that all inhabitants could be spruced up for going to church on Sunday. Many children took their turn washing in a kettle-filled tub that would be placed in front of the fire. Hair grooming got particular attention. The lice comb was frequently used.  Curls were teased with rags and pipe cleaners ensuring an uncomfortable night’s sleep for many girls. Short hair was traditional for the boys. The hair-cut at home or sitting on the plank that went across the arms of the barber’s chair was a familiar experience to many young lads.

Polio and TB were especially feared

The health of children was always a worry for parents and in the 1950s there were epidemics of Polio and TB which were especially feared. Everyone knew someone who suffered with one of these diseases. Little Willie was a household name as part of Polio awareness campaigns and donation boxes.

In contrast, colds, sniffles and chilblains were common and children were almost encouraged to get measles if someone else in the house had it: this was easily done as most often they slept with their siblings in the same bed. Castor and Cod Liver oil, Epsom salts, petroleum jelly, Milk of Magnesia, Gripe Water and Syrup of Figs were commonly found in the home. Biestings, the first rich milk that came from a calving cow was popular for building up children’s immune systems..

Breast feeding was in decline in the 1950s and formula feeding the fashion. A variety of glass feeding bottles were in use at the time: boat-shaped bottles with one or two rubber teats (for regulating the air inside), along with the upright Pyrex bottles, were popular. Along with cow’s milk, cocoa and Bovril were popular drinks for children.

Jelly and custard was a favourite dessert

Children ate whatever food adults had but in smaller quantities. Potatoes, bread and porridge were staples in many homes and fish such as ling was a common feature during Lent. Some favourites for children were ‘Cally‘ – a dish of new potatoes with a well of butter and scallions or ‘Goody‘ – bread heated in hot milk with sugar or raisins. Jelly and custard was a favourite dessert for many.  Travelling shops were common in rural areas and sweets like penny bars, gobstoppers, wafer ice-cream, crisps and sticks of rock were welcome treats.

Many homes had a wooden chair for feeding toddlers with a bar that inserted through two holes across the front to secure them in. Tea chests were commonly used as playpens to keep youngsters from harm. They also spent a lot of time in large prams, some of which converted to toddler go-carts.

Many children never went to the seaside

Holidays were rare as walking was the most common form of transport. Many children never went to the seaside, some never encountering the sea until they were adults, but often children paddled or swam in a nearby stream or lake. Visiting relatives was more common than going on holiday or perhaps there might be a train trip or a school tour to Dublin. The GAA was important in communities and playing and watching matches was a feature of many a childhood. Older children sometimes travelled to county towns or to Croke Park. In larger towns, boy scouts were active. Youth hostelling was also reasonably common for teenagers and a way of seeing more of the country.

Relatives who returned home from working abroad brought cause for celebration. Fair days and markets were attended. Hopalong Cassidy, Roy Rogers and Gene Autry were renowned names from cinema visits on a Saturday afternoon. When there was no cinema there were often travelling family roadshows where films were shown, plays enacted, along with some amusements and maybe a rifle range. Birthday parties were more common in cities and large towns but generally they were very low key affairs.

A parcel from America or England was often filled with clothes, toys and treats

Religious ceremonies such as Communion and Confirmation were important milestones. Attending church services was part of the routine of every week with emphasis on Sodalities, Missions, Stations, Lent, Easter and May processions.

Christmas was a time of excitement. Presents given at Christmastime were necessarily small – often the Christmas shopping was done by bicycle to nearest large town. A parcel from America or England was often the highlight as it was filled with clothes, toys and treats.

This 1950s childhood was enjoyed by countless children – a frugal or austere one in some ways, although in other ways, privileged, compared to the hardship endured by others.