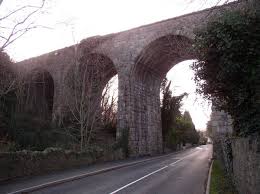 Viaducts are a specific long series of bridges supported by spans or arches between pillars. related to aqueducts in that both were originally designed by the Romans.  Viaducts were constructed over rivers, lakes, roads or valleys for the use of railway lines. [i]

Viaduct refers to long bridges or even a series of bridges that are connected by arches over water or land.  They usually connected two points of landscape similar in height to carry rail traffic. [ii]

According to Joe  P. Mc Dermott of Newport Historical Society the name ‘viaduct’ is a derivative of Latin ‘Via’ & ‘Ducere.’  These viaduct crossings were constructed within cities or towns of Ireland for railway traffic.  Land based viaducts connected parts of similar heights of the landscapes as crossings over valleys, rivers, or roadways. [iii]

Irish Rail transport history of travel began a decade later than that of Great Britain.  A railway link between Limerick & Waterford had been authorized as far back as 1826.  The first railway constructed had just a distance of ten km: that was the Dublin – Kingstown railway (D&KR ) between Westland Row with Kingstown during 1834.  Contractor was William Dargan who was known as ‘The founder of railways in Ireland’  as he was involved with several major railway lines.  The locomotive ‘Hibernia‘ brought a train the full route from the Westland Row terminus to Kingstown on 9th October 1834.  The railway was built to one thousand four hundred & thirty – five mm standard gauge.  This entire route now forms part of the present – day Dublin Area Rapid Transit (DART) electrified commuter rail system. [iv]

This viaduct over Amies Street was designed by John Chalconer Smith chief engineer to the Dublin, Wicklow & Wexford Railway Company.  It cost in the region of £350,000 to complete.  Also known as the Loopline bridge or the City of Dublin Junction Railway.  The viaduct was constructed between 1889 & 1891 to link Connolly Station on the north side of the Liffey to Westland Row on the south.  Construction comprised of central steel spans supported on double row of piers that spanned the road.  It had masonry spans to southwest also red brick spans to northeast.  A steel girder base over carriageway with steel panels formed parapets.  Carriageway was supported on cylindrical cast – Iron fluted columns with round plinth bases also moulded detailing to neck.  Square – plan yellow brick piers on brown brick plinths were erected to bases of southeast of the bridge.  Walls of yellow brick abutment to ends of steel span had block & start limestone quoins with limestone coping masonry span to southwest had a segmental arch of red brick voussoirs also rusticated coursed limestone spandrel with parapet walls & red brick coping.  Included were splayed limestone abutments to southwest of span.  Viaduct had a double arch to northeast of central span with segmental arches also red brick voussoirs, red brick spandrel & parapet walls.  Manufacturers’  insignia to plinth base of piers was engraved with ‘A. Handyside & Co Ltd. / Derby London.’   Registered number 50010117.  Coordinates are 316616, 234955. (date recorded 10th November 201 1) [v]

This site features an image of three of the five arches of the old abandoned Bride’s Glen railway viaduct in Loughlinstown.   Bride’s Glen viaduct once carried the old Harcourt Street railway line.  The railway line was closed in 1959.  Now the Luas Green Line tram runs on several parts of the old railway line from nearby Brides Glen into Dublin.  (John Hickey 24th February 2017 ) [vi]

Bride’s Glen viaduct that spans  at present over Cherrywood road was once a part of Harcourt Street railway line constructed during c. 1854.  The viaduct structure was an elegant five – span granite masonry arch.  The line closed during 1958.  Images also a map feature at this link.  (Robert Burns February 2017 ): https://twitter.com/robertburns73/status/1360891227957305344?lang=en

This video features views of the viaduct at this link: https://www.youtube.com/watch?v=jv4lkswxpZM

One may view a YouTube of 14th February 2018 of the abandoned railway line: https://www.youtube.com/watch?v=M3ABgHYXmEI

The five – arched Bride’s Glen viaduct spans the Loughlinstown river valley also Bride’s Glen road. The Harcourt Street Railway line or Seanlíne Iarnróid Shráid Fhearchair once ran from Harcourt Street in Dublin City through the southern suburbs to Bray.  A construction of a twenty kilometre railway from Bray that opened on 10th July 1854 was intended initially to terminate at Harcourt Road.  Harcourt Street Station was not completed until 1859.  Two railway companies: The Dublin, Wicklow & Wexford Railway (DW&WR ) constructed the line from Dundrum to Bray & the Dublin, Dundrum & Rathfarnham Railway (DD&RR ) were to complete the line from Harcourt Street to Dublin, but the latter never materialized.  The construction of the route was double tracked during 1862.  (An accident occurred on 14th February 1900 when a Enniscorthy train failed to halt at the buffers whilst another accident occurred on 23rd December 1957 due to human error ) [vii]