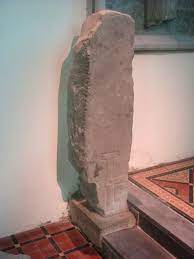 Ogham stones are among Ireland’s most remarkable national treasures.  These carved stones bear inscriptions in the unique Irish Ogham Alphabet that used a system of notches & horizontal or diagonal lines, scores to represent the sounds of an early form of the Irish language.  The stones were inscribed with prominent people’s names  also perhaps  tribal affiliation or geographical areas.  The inscriptions constituted the earliest recorded form of Irish in written earliest records that dated back at least as far as the fifth century AD.  [i]

Macalister R. A. S. 1945 produced line drawings of the inscribed in his Corpus Inscriptionum Insularum Celticarum for which he deserves plaudits.  Damian McManus (Professor of Early Irish, Trinity College Dublin &  author of A Guide to Ogam) carried out excellent work on the linguistic aspects of stones, whilst Fionnbarr Moore (Senior Archaeologist, National Monuments Service) on the archaeological perspective.  Jost Gippert’s work in digitizing colour slides of several of the ogham inscriptions in his online project Thesaurus Indogermanischer Text und Sprachmaterialien should be recognized.  Several have been reproduced in a CD ROM produced by Fios Feasa (2002), with additional  photographs.  The Celtic Inscribed Stones Project (CISP) also includes several ogham stones in its online database.  The Ogham in 3D project focuses exclusively on ogham stones, bringing all available information together in a single, searchable resource.  This site includes a video by Dr. White. [ii]

It is believed that the Ogham language dates back to the fourth century AD.  The etymology of the word itself can be traced back to the ancient Irish warrior-god Ogma, the God of Eloquence.  Ogham was the sole written language used within ancient Ireland; in use throughout the fifth & sixth centuries until foreign Christian missionaries introduced Latin.  Knowledge of the ogham alphabet was preserved through two medieval manuscripts The Auraicept na n-Éces  & The Book of Ballymote  (Leabhar Bhaile an Mhóta) [iii]

Ogham was the oldest written version of primitive Irish language.  Ogham stones were carved and read from bottom to top.  The alphabet originally comprised three groups of consonants with one group of vowels.  Each group of consonants contained five letters.  Ogham is also known as the Celtic Tree Alphabet.  Medieval manuscripts interpret many of the letter names as the names of trees or shrubs.  For example, Beith  is interpreted as meaning birch-tree  &  Sail (ᚄ) means willow-tree in Old Irish. [iv]

Several ogham stones bear genealogical inscriptions on corners of large stone slabs.  This inscription, carved on a stone on Inchagoill Island in Galway, is a typical example that translates as ‘The stone of Lugnaedon son of Limenueh,’  ᚛ᚂᚔᚓ ᚂᚒᚌᚅᚐᚓᚇᚑᚅ ᚋᚐᚉᚉᚔ ᚋᚓᚅᚒᚓᚆ᚜ http://explore.blarney.com/ogham-irelands-ancient-language/

The first ogham stone recorded within Ireland was at East Emlagh on the Dingle Peninsula. An account by Edward Lhwyd, a Welsh antiquarian dated to 1702-1709.  Charles Vallancyey published in 1785 an account of Mount Callan stone in Co. Clare.  During the nineteenth century publications included Ferguson Samual Ogham Inscriptions in Ireland, Wales and Scotland (1887) and also Brash Richard The Ogam Inscribed Monuments of the Gaedil in the British Isles (1879).  During the twentieth centuries, R. A. S Macalister, published Studies in Irish Epigraphy in three volumes.  His excellent Corpus Inscriptionum Insularum Celticarum of two volumes during 1945 & 1949 remain invaluable. [v]

Ogham stones are an Irish feature of single standing stones or menhirs.  It is a writing system of various straight lines & notches.  These were engraved on the edges of the upright standing stones in order to attach names or short texts.  The inscriptions are the oldest records in Irish language. These ogham stones possibly marked out grave sites, marked boarders or perpetuated important persons’ memory. [vi]

The pioneering work during 1945  of R.A.S. Macalister’s line drawings of the inscribed stones in his Corpus Inscriptionum Insularum Celticarum’should be applauded.  Works  by  McManus on the Ogham linguistic aspects also Fionnbarr Moore Senior archaeologist, National Monuments Service on the archaeological perspective of Ogham Stones are of invaluable interest: https://ogham.celt.dias.ie/menu.php?lang=en

The Royal Irish Academy has The Book of Ballymote.  Principal scribes were Solam Ó Droma, Robertus Mac Sithigh a& Magnus Ó Duibgennain (pupils of the great brehon McEgan family). This publication contains genealogical, topographical, biblical also hagiographical material, including Lebor Gabála (Book of the Invasions), Lebor na gCeart (Book of Rights), Dindshenchas with a key to the ogham alphabet.  Versions from Latin of the destruction of Troy & the history of Philip & Alexander of Macedonia are included.  It may be researched at RIA MS 23 P 12: Cat. No. 536 c. A.D. 1391. [vii]

Ogham stones (pronounced Oh-am) are located across Ireland also may be viewed in Wales, Scotland, England & the Isle of Man.  Believed to date back to the pre-Christian period, the Celtic Ogham alphabet is included in Medieval-era manuscripts or copies of treatises;  Leabhar Bhaile an Mhóta (the Book of Ballymote), Leabhar Buidhe Leacáin (the Yellow Book of Lecan), Lebor Laignech (the Book of Leinster), In Lebor Ogaim (the Ogham Tract) also Auraicept na n-Éces  (the Scholar’s Primer) (Fergus, 19th September 2015) [viii]

An ogham stone from Kilmannin near Ballyhaunis, Co. Mayo was discovered built into a wall of a church.  It had two inscriptions & was 1.22 in height.  It is now stored in the National Museum of Ireland.  Eoin MacNeill Professor of Early Irish History University College Dublin was instrumental with the further documentation of ogham language & historical information contained within the ogham inscriptions during 1991.  Also published Damian McManus, A Guide to Ogam (1991) [ix]

A video by White Dr. Nora may be viewed on this site: https://ogham.celt.dias.ie/menu.php?lang=en

One may find this link of interest: https://ogham.ie/history/

PDF may be downloaded at this link: https://www.academia.edu/4134903/Proto_Ogham

This may be of interest: https://www.historyireland.com/ogham-gleanings-irish-manuscript-swiss-city-st-gallen/

One may peruse information on In Lebor Ogaim, The Book of Ogams or Ogam Tract  at this site: https://en.wikipedia.org/wiki/In_Lebor_Ogaim

3D models of ogham stones may be viewed at this site: https://sketchfab.com/discoveryprogramme/collections/ogham-stones-f8c5df5d84bc4ed4b2a70a0ac504a5e8

Information on ogham trees available at this link: https://www.stormwatchdruid.uk/Ogham_Trees/ogham_trees.html

Interesting information is available at this link: https://www.treesforcities.org/stories/the-mysterious-ogham