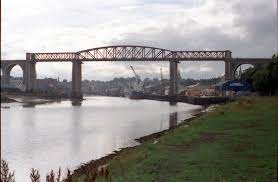 Viaducts are a specific long series of bridges supported by spans or arches between pillars. related to aqueducts in that both were originally designed by the Romans.  Viaducts were constructed over rivers, lakes, roads or valleys for the use of railway lines. [i]

The term viaduct refers to long bridges or a series of bridges connected by arches over water or land.  They usually connect two points of landscape similar in height to carry Rail Traffic. [ii]

Several viaducts still intact or disused are mentioned below:

Athlone viaduct was constructed by the Midland Great Western railway company to serve the Dublin Broadstone to Galway line.  The project’s engineer was G. W. Hemans with Fox Henderson & Co. the principal contractors involved.  The viaduct was located to the north of Athlone town centre.  The amazing bridge was a magnificent statement of the great Victorian period of industrial expansion during the age of Brunel.  Construction began during 1850 of this six – span wrought – iron railway bridge over the Shannon River.  Bridge rested on six pairs of iron Doric shafts while the two widest spans had latticed elliptical girders.  The piers  either end were constructed with rusticated limestone.  For the first time within Ireland this type of technique was a major feat of engineering when the compressed air allowed the sinking of the cylinders to form the piers.  Viaduct opened during 1851.  Originally designed to open to allow the passing of river traffic along the Shannon the middle section was changed to a fixed section during 1972.  (National Inventory of Architectural Heritage. Department of Arts, Heritage and the Gaeltacht 2014 )  Registered number 15004129.  Coordinates are 203649, 2411879. (date recorded 8th September 2004 ) [iii]

Engineer in charge of the construction of the Athlone Viaduct was G. W. Hemans with contractors Fox & Henderson.  Construction began in 1850, it was completed in eighteen months.  It was an amazing feat of engineering as iron – work was shipped to Limerick then transported by barge to Athlone.  Viaduct had a length of five hundred & forty feet.  It had a central span of one hundred & twenty feet that opened to allow ships passage on the Shannon. This spectacular bridge according to T. P. O’Connor was regarded as ‘of all the prospects he had seen in Europe, the sight dearest to him was the graceful railway bridge over the Shannon at Athlone.’  [iv]

Construction of the railway bridge across the Shannon at Athlone was hailed as the single greatest engineering feat of the Dublin – Galway line.  This bridge designed by G. W. Hemans with contractors Messrs. Fox & Henderson was responsible for the transportation by barge of the massive iron – work from Limerick.  This structure was five hundred & forty – two feet in length.  An open central span accommodated tall sailing vessels.  Constructed with twelve cylindrical pillars of ten feet the chief engineer Mr. Milner demonstrated the historical art by means of compressed air in the placement of those in position during 1850.  On Monday, 21st July 1851 the first train crossed over the Shannon Viaduct in Athlone.  An image features  on this site. [v]

Construction of the Athlone Railway Bridge during 1851 led to the subsequent development of mainline rail lines to Galway City also to Westport. [vi]

The Athlone Viaduct was also known as ‘The White Bridge.’   This viaduct was constructed over eighteen months from 1851.  It was designed by G. W. Hemans.  The ironwork was shipped to Limerick then transferred to Athlone by barge.  It had a central span that opened to accommodate tall sailing craft.  Viaduct was one hundred & sixty – five metres in length.  Twelve cylindrical pillars each were 3.0 meters in diameter.  The central span opening was thirty seven meters in length.  Later during 1972 it was changed to a fixed section.  The bridge is listed in the national inventory of architectural heritage under number 15004129. [vii]

An etching of the Athlone Viaduct of 1926 by Percy Francis Gethin was published in Mary Chamot, Dennis Farr & Martin Butlin’s 1964 The Modern British Paintings, Drawings and Sculpture (London )  It may be viewed at The Tate Gallery or at this link: https://www.tate.org.uk/art/artworks/gethin-athlone-n04174