You are here: HomenextExplore our archivenextTopicsnextA miscellany of topicsnextBallygill Bridge, scene of the last known fatal duel in Ireland 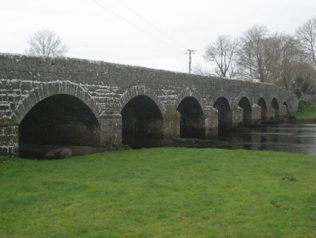 Ballygill Bridge runs over the River Suck straddling the border between the counties of Roscommon and Galway about 2 miles north of the town of Ballinasloe, On this very Bridge, 180 years ago, a duel took place between two local men, a Malachy Kelly of Woodmount House, Tonalig, Creagh, Co. Roscommon, and an Owen Lynch of Woodpark House, Rathpeak, Moore, Co. Roscommon.

The duel took place at dawn

The duel was the result of an argument the 2 men had at a horse race meeting a few weeks previously. Kelly was an accomplished jockey, and Lynch owned racehorses and apparently Kelly, for whatever reason, refused to mount Lynch’s horse for a race and a heated exchange took place causing Kelly to take offence. Lynch offered a verbal apology, but Kelly demanded a written one and when it was not forthcoming Kelly challenged Lynch to a duel which he accepted. The duel took place at dawn, before 6am, on Friday 28th of May 1841, and was attended by members of the 2 men’s families and friends, and possibly locals. Malachy Kellys father, Hugh, checked and loaded the pistols. It appears that the men had to stand back to back on the roadway in the middle of the bridge and then walk forward 12 paces each on the sound of a signal, and then turn and fire their weapon. Both men fired, but Kelly got shot in the groin. Lynch fled the scene uninjured, and Kelly’s family took him home to their house in Woodmount about 5 miles away and called a local doctor.

Dr. William Holohan came to see him. Malachy however died at home from his wounds one week later on the 4th of June 1841. Lynch was arrested and eventually brought to trial in Galway City over a year later but the Judge acquitted him as he found that in the circumstances that there was no malice involved in how Kelly came about his death. Malachy Kelly left a wife and at least 3 children behind him. Owen Lynch eventually settled down in a place called Abbeyville House near Loughrea. The practice of duelling as a way of settling disputes was illegal and had already been outlawed long before the 1840s, but it continued to be used occasionally for a time after. This particular duel, held on Ballygill Bridge is of historic significance as it was the last known duel that resulted in a fatality on the Island of Ireland.