You are here: HomenextExplore our archivenextTopicsnextA miscellany of topicsnextA brief history of the Kelp industry in Fanad

A brief history of the Kelp industry in Fanad 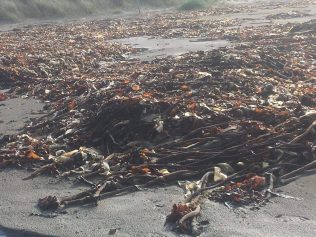 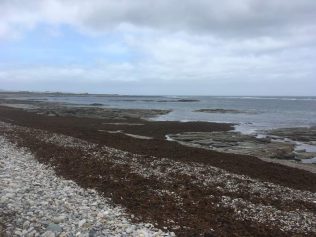 The harvesting of seaweed and it’s use for various purposes appears to be quite an ancient practice in Ireland. In addition to its longstanding role, as a fertilizer and fodder for livestock, seaweed has been an important raw material for the chemical industry since the 1700s and possibly longer.

If you walk the Fanad Coastline from Ballywhoriskey to Fanad Head, there are many remains of Kelp Kilns. These are probably the only evidence that remains today to tell of an industry that existed along our coast for many years prior to the 1930s and indeed Fanad was one of the largest producers of kelp along the western seaboard, bettered only by Polahenney in Sligo and Quilty in Clare. Kelp production was a vital source of income in coastal areas, at a time when money was very hard come by.

The production of kelp went through three historical phases. From 1700-1820 we had the Alkali phase, which produced Alkali/Soda and it’s main uses were for soap, glass, alum for dying, papermaking and bleaching. From 1820 to 1940 we had the Iodine phase, and the iodine produced was used in medicine and photography. From 1940 to the present day we have the Alginate phase, and the alginates produced are used in thickening agents in foods and also within the cosmetics industry.

The seaweed used for kelp making was washed ashore at different times of the year, with large quantities being washed in after storms. There’s not many in Fanad that won’t have heard of the “Screigh Bhuí” storm in early summer and the “Leath” storm in early winter.
The iodine content of seaweed varied with winter leath being better as it contains a lot of slat maras.

The seaweed was harvested and dried and then made into stacks or “crossways” where it stayed until burning time in June. The burning was done in a kiln and here in Fanad our kilns were rectangular or oblong settings of stones, open at the top and enclosing a shallow pit. The kiln was started by burning turf which the weed was placed on, in small quantities, so as not to put out the fire. The ash that remained after the burning was know as kelp. The kelp had to be raked by means of an iron bar until it hardened and then when cooled overnight it was broken into sections and transported by horse and cart from Fanad North, and by boat up the Mulroy from Ballywhoriskey. From here it was shipped to Glasgow and then transported by barge to the iodine factory on the Forth and Clyde canal. The demand for iodine in Europe was met by the kelpburners of Ireland, Scotland, Brittany and Norway.

The decline of an industry

The death knell for kelp came when it was discovered that the nitrate deposits of Chile contain a very small percentage of sodium iodate and in the late 1800s the manufacturers began to export iodine. The cost of this method of iodine production was much lower than that of iodine from kelp. The consequence of this competition was that the iodine factories of Scotland and Brittany began to close down

The Kelp industry of Fanad didn’t cease at this time. A French firm who were buying kelp from other parts of Ireland, came to trade in Fanad, and also we now had our own Department of Lands and Fisheries and there was a factory built in Galway. During the 1920s different strategies were undertaken to try and make it a viable industry, but the fact that iodine was being produced much more cheaply from iodate meant the kelp industry ceased.