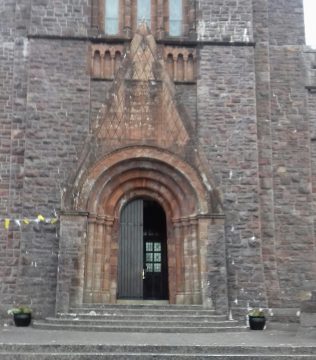 The Psalter of St. Columba

The psalter was passed to the O ‘Donnell clan following the Battle of Cul Dreimhne in A. D. 561.  While it remained in their ownership it was in the custody of Mac Robhartaigh family of Ballmagroarthy in Co. Dublin.  Between 1062-1098 a special shrine or Cumdach  was manufactured by Sitric of Kells, Co. Meath to the order of Cathbarr O ‘Donnel for the manuscripts protection.  During 1691 following a battle in Limerick one family member brought it to France when he was exiled.  It was a century before it was discovered by renowned genealogist Sir William Betham who then returned it to Sir Neal O’ Donel at Newport during 1803.  In the first half of the nineteenth century this manuscript was kept at Newport House in County Mayo.   The Cathach was donated during 1843 by Sir Richard O’ Donel to the Royal Irish Academy in Dublin.  [ii]

‘The Cathach is the first Insular book in which decoration begins to assume a significant role in articulating the text, with its decorated initials (their crosses and fish perhaps influenced by manuscripts associated with production in Rome under Pope Gregory the Great, combined with native Celtic ornament) and the diminuendo effect of the following letters linking them to the actual text script.  Herein lie the origins of the magnificent full-page illuminated incipits of the Lindisfarne Gospels and the Book of Kells.’   Brown Michelle P. 2004  ‘Preaching with the pen the contribution of insular scribes to the transmission of sacred text’, from the 6th to 9th Centuries’  (University of London) [v]

‘The earliest recorded historical case-law on the right to copy comes from ancient Ireland. The Cathach is the oldest extant Irish manuscript of the psalter and the earliest example of Irish writing. . . .  It is traditionally ascribed to Saint Columba as the copy, made at night in haste by a miraculous light, of a psalter lent to Columba by St. Finnian.  A dispute arose about the ownership of the copy and King Diarmait Mac Cerbhaill gave the judgement ‘to every cow belongs her calf, therefore to every book belongs its copy.’  [vi]

The script was in the hand of a single scribe with early majuscule with ornamental capitals several appeared in red like the red in the lettering for the rubrics: the colour has now faded.  Framework of the capitals was often outlined by a series of scarlet dots.  Decoration consisted mostly of spirals or animal heads. Capitals do not stand out from the text but are drawn in by a series of letters of diminishing size. [vii]

Leaves of the Cathach  when taken from the Cumdach were caked together & cockled.  During 1920 within the British Museum bindery: leaves were separated then mounted on paper frames. The butt joints were overladen with white net.  Rebounded work was carried out with further repairs between 1980 /1981 by Roger Dowell with his assistant Dorothy Cumpstey at a cost of six thousand, one hundred & fifty pounds for the Cathach also two hundred & fifty pounds for the Cumdach.   Paper mounting, from which the vellum leaves had come adrift, were replaced by new vellum mounts especially stained to match the colour of its original leaves.  Butted edges in the vellum mounts were joined with pieces of degreased fish skin.  Then leaves assembled in sections were sewn together within a zig- zag of hand – made paper onto cords then bound in English oak boards.  The spine was covered in white alum – tawed pigskin.  To keep the vellum under pressure also to prevent cockling, the rebounded copy was encased within a special box designed by David Powel; made by George Taylor in Edward’s Barnsley’s workshop.  [viii]

The Cathach was displayed during 2009 as part of The Royal Academy Exhibition in Dublin.  According to the R I A historical scholars ‘have cast doubts on the authorship by St. Columba as well as on the dating.’  [ix]

The pedigree of the O’ Donel’s may be viewed on this site: https://www.libraryireland.com/Pedigrees1/o-donel-1-heremon.php

The Battle Book of the O ‘Donel’s   is featured as a short article at this link: http://newportmayo.ie/h-newporthouse.html

The Cathach was published in CD-ROM format by R I A  in 2002.  Each vellum page digitized for The Irish Script on Screen Project’ for publication during 2021 as was believed to be the one thousand, five hundred anniversary of St. Columba’s birth. [x]

Bernadette Cunningham gave a presentation on The Cathach of Colum Cille & the O ‘Donnells at the Newport 300 Mayo History Weekend Seminar on 14th – 16th October 2022. (NBC)