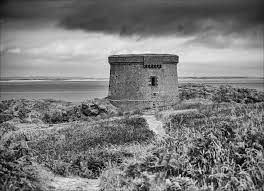 ‘In 1793 Corsica was in insurrection against the French, and the British Government, as a matter of policy, decided to support the insurgents. It was arranged to begin operations by taking a tower, held by the French, in a strategic position on Cape Mortella, a headland dominating the only safe anchorage in the Gulf of San Firenzo. This structure was armed with one twenty-four pounder and two eighteen pounders. The round gun Tower had been designed so that offensive cannon fire would bounce harmlessly without breaching the walls.  Encyclopedia Britannica’ 11th edition, Chapters of Dublin  chapter XL11.  Extract from Clements Bill 2011 Martello Towers Worldwide-illustrated.   Irish Martello Towers were located at coastal locations.  Several were located on remote headlands also on islands. [i]

The first Martello Tower Forts appeared as defensive structures during 1804.  Several of them were constructed along the coastline at Cork, Galway, Clare, Wicklow & Wexford also in the Dublin area (these included islands of ‘Ireland’s Eye’ also ‘Lambey Island’ )  The British constructed about fifty Martello Towers around the Irish east coastline from Millmount at Drogheda in County Louth to Bray in County Wicklow.  Twenty-six towers were built from Balbriggan to Bray in sight of each other that provided the ability for communication with one another or to warn of threatened attacks.  Two towers were located on offshore islands, Irelands Eye off Howth also Shenick island off Skerries.  The north Dublin towers were numbered one to twelve as they started at Red Rock Sutton Creek on the Dublin side of the Howth Peninsula. All twelve towers constructed remain standing at this time but only the tower at Howth Harbour is open for viewing.  Seven towers are privately owned whilst four of these in private ownership are occupied.  (Sutton, Portmarnock, Malahide, Portrane). Balbriggan, Shenick Island, Drumanagh also Howth Harbour Tower are under the jurisdiction of the Fingal County Council)  The Balbriggan tower is in extremely poor condition with the entire top missing. [ii]

The initial fear of an invasion by Napoleon Bonaparte was the reason for these defence structures around Ireland’s coasts.  The name ‘Martello‘ derived from the name of a tower at Mortella point in the Gulf of Fiorenzo.  These Martello Towers were constructed during 1804 with the purpose to provide ‘bombproof’  buildings to prevent attacks.  The original towers were of circular shape with a two to four meters thick walls constructed from local sourced stone.  The entrance doorways were three metres above ground with access to the entrance by a ladder.  This entailed the ladder could be removed as protection. [iii]

According to this Martello Towers Research Project  the  Dublin towers were the only group constructed to defend a capital city.  They were typically squat circular two-story masonry towers.  The entrance was landward side at first floor level defended by a machicolation, with one or more cannons affixed to a rooftop gun platform. [iv]