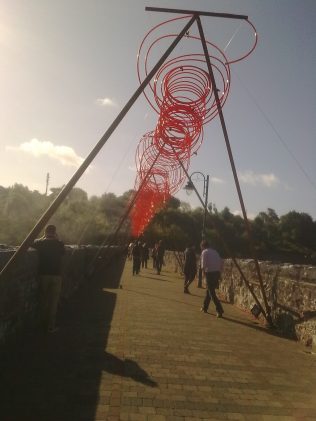 This arts project was a partnership project of Mayo County Council’s international public art programme in collaboration with Northamptonshire County Council & Consortium Transversal Cultural action network in Catalonia.  It was a contemporary visual also digital art project that facilitated the creation of nine new temporary outdoor artworks in three countries: (three in each participating region; one artwork by each artist) by three international artists as part of the European Union’s culture programme 2007-2013.  The artworks responded to former railway lines, their heritage with local environment in Northamptonshire (UK ), Mayo (IE ) & Catalonia (CAT )  The project also examined how the change of use has now impacted on local economies or lifestyles.  In each instance they were situated on or adjacent to disused railway lines now used as walking or cycle paths.  The nine artworks remained in-situ until the end of summer 2014.  The Irish edition of the project was situated along the Great Western Greenway (the former railway line that connected Westport to Achill )  The three artists were Noah Rose with ‘The Museum of Interconnected Events’,  Aideen Barry’s project was titled ‘Strange Terrain’  while Xevi Bayona Camó’s ‘Smoke Train’ was situated on the Newport Viaduct.  One of the main aims of the project was to achieve to increase public assess among existing walkers, runners, cyclists or recreational or heritage groups.  The Irish Launch by director of the Abbey Senator Fiach Mac Conghail of ‘Changing Tracks’  was held in Westport, Co. Mayo, on 12th July 2014.  It was followed by a brief walking tour of the artworks in Westport prior to a bus tour of several artworks further along the greenway.  Launches also took place in Tortosa on 30th May, in Girona & Olot on the 14th June then in Northamptonshire on 15th August.  Seminar was held in GMIT in Castlebar on 25th / 26th September that same year.  During the seminar art critic Gemma Tipton provided an independent reflection of the ‘Changing Tracks’ project in Mayo with a Q & A session & an artist’s case study.  That event was followed by a tour of all artworks. [i]

‘The Museum of Interconnected Events’

Noah Rose’s sculptural installation was situated along the Greenways.  The small museums comprised a series of ‘event cabinets’ clad with a ‘shell ’ of local materials. They contained a variety of artefacts, that included salvaged objects sourced locally.  These included archival photographs with other documents that related to the impact of particular railways or their surroundings, also local species diversity along with local legends or cultural traditions. When Noah Rose conducted a large body of research in the three regions, he found curious links between the countries illustrated in the collections.  The cabinets collections explore themes such as migration & exile, hidden personal histories of journeys, transformation of raw materials, the livelihoods of local people also the persistence of memory with the connection between language & cultural Identity.  [ii]

His project included the exploration of various materials, both for their qualities or sense of malleability, cultural resonance, historic significance to the place they came from, their deeper meaning to the people who worked with them on several traditions with which they are associated.  He employed that method during 2014 with his projects for ‘Changing Tracks.’   His cabinets included songs or poems that related to micro-histories as he explored the similar themes of a common European Heritage.  He stated: ‘I researched both the contents and also the different materials that comprised the outer ‘shell’ of each cabinet. These included: natural cork and ceramic fruits from Catalunya, aluminium railway components from Northamptonshire.  Each piece of material was chosen for their aesthetic and material qualities.  Also for some aspect of historical significance relating to their production or the industries which gave rise to them and which intertwined with the communities of people that made their living from working with them.’  (Cronagallagher )  [iii]

His specialty is the creation of site-specific works for public spaces, as he seeks out the invisible threads to bring aspects of a place together through cultural or historic settings. [iv]

This site features an image of the Mulrany cabinet: http://noahrose.net/

(One of Noah Rose’s cabinets along Westport Greenway displayed several of my Father’s artefacts pertaining to the Spanish Civil War along with a poem of mine. (NBC )

Aideen Barry’s installations also her videos were inspired by the nineteenth century travel writer & adventurer Lilias Campbell Davidson 1889 Hints for Lady Travelers at home and abroad.    Westport Convent Folly also the old water tower at the back of the Mulrany Hotel were the chosen sites for her exhibitions or installations.  She herself produced limited-edition interactive publications Strange Terrain that may be accessed by VR code within the book.   [vi]

Aideen Barry presented thirty stop-motion videos that projected at intervals during the cycling & walking tracks within an architectural folly & in a water tower.  [vii]

Aideen Barry’s means of expression are interchangeable whether in performance, film, animation, drawing, sculpture or installations.  One may view her works at this link: www.aideenbarry.com

Xevi Bayona Camó  Catalayan artist & architect is well known for his spectacular multimedia installations.  He applies a range of honed creative skills from architecture to visual art, from designs to photography to deliver nurtured artistic concepts.  Features of his works are audience interaction with lots of lighting while he references the past influence of the railways.  Xevi Bayona Camó’s Mayo project is an installation of a large scale ‘ Steam Train ’ located at the viaduct in Newport.  He projected steam through the art with an addition of lights.  [ix]

His images may be viewed at https://www.instagram.com/xevi_bayona/

Information is available at this link: http://www.mayococo.ie/en/Services/ArtsOffice/ArtsNews/StoryIfNoFilesToUpload,24971,en.aspx

A photo of the three artists may be viewed at this Link: https://www.bbc.com/news/

Information may be viewed this site: https://www.changingtracks.eu/

Information is available at this link: http://www.mayococo.ie/en/Services/ArtsOffice/ArtsNews/StoryIfNoFilesToUpload,24971,en.aspx

YouTube videos or Vimto’s of ‘Changing Tracks’  are available to view.