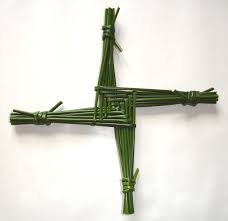 The season of Imbolc or Imbolg was a festival that marked the beginning of spring which has been celebrated since ancient times. A cross quarter day: midpoint between the winter solstice with the spring equinox it may fall between February 2nd to 7th.  When Ireland was Christianized during the fifth century Goddess Brigid’s mantle was passed on to Saint Brigid (born at Faughart near Dundalk, Co. Louth)  She founded a monastery in Kildare.  Norman chronicler Gerald of Wales reported during the twelfth century that a company of nuns attended an ‘inextinguishable‘ fire at Kildare in St. Brigid’s honour.  The fire had been burning for five hundred years, the fire had produced no ash.  Men were not allowed near the fire!  [i]

St. Brigid’s Day with its origins in the Celtic Imbolc was the festival of fertility that marked the beginning of spring within Ireland.  It signalled an end to the darkness of winter then ushered in a new season of hope & growth.  No celebration would have been complete without a festive meal.  Brigid was a pagan goddess associated with acts of healing, poetry & blacksmithing.  She featured in pre – Christian Irish mythology as the daughter of The Dagda who possessed control over life, death, the weather also time. [ii]

Brigid roots lay in the Celtic festival of Imbolc the feast of the goddess Brigid.  In old Irish ‘Imbolc’ meant ‘in the belly’ a reference to lambing with the renewal of spring.  Brigid was a triple goddess (of healing, fire & poetry)  Her namesake St. Brigid born in 450 AD continued the same associations. Her name may be translated as ‘the exalted one.’  She was the patron saint of poets & midwives.  She maintained a sacred fire by the monastery she founded in Kildare. [iii]

Saint Brigid (Brigid of Kildare or Brigid of Ireland) born circa c 451 – 525 was one of the most iconic early Irish Christian nuns.  She founded monasteries & assisted citizens. (Paris Callan 29th July 2021) [v]

Naomh Bríd or St. Brigid of Kildare (c. 451 – 525) was one of Ireland’s patron saints.  Irish hagiography presented her as an early Christian nun, abbess also founder of several monasteries within Ireland. [vi]

St. Brigid convinced the King of Leinster to relinquish as much land as her cloak could cover. Seeing her small cloak the king granted her request.  Friends of St. Brigid grabbed an edge of the cloak while the king watched in awe they walked north, east, south then west as they stretched the cloak across a huge distance.  Following the miracle her request was granted!  St. Brigid’s Bed were produced from rushes in certain areas of the country as an invitation to the saint to rest on January the 31.st  Families celebrated the beginning of spring with a hearty meal of a ‘supper of potatoes and freshly churned butter.’  It may have included fresh apple cakes, barmbrack also tea.  [vii]

Prominent folklorist Seán Ó’ Súilleabháin penned: ‘The main significance of the feast of St. Brigid would seem to be that it was a Christianisation of one of the focal points of the agricultural year in Ireland, the starting point of preparations for the spring sowing.  Every manifestation of the cult of the saint (or of the deity she replaced) is bound up in some way with food production’  [viii]

St. Brigid designed the cross herself:  She visited an old pagan chieftain (several versions describe him as her father) at his last moments on his deathbed.  The servants had called upon Brigid to soothe or calm him.  She sat beside him talking to him while she picked up rushes from the floor then weaved them by hand into a cross.  When the chieftain noticed the cross, he asked her about it.  St. Brigid provided an explanation.  He willingly converted to Christianity then was baptized prior to his demise. [ix]

St. Brigid’s Cross’s meaning is multi – layered.  It possibly had its roots in the pagan sun wheel, meant to bless the earth with fertility & life.  Centrepiece recalled the movement of the stars as the year passed, it evoked how the big dipper rotated slowly around the north star.  A video features on this site. [x]

St. Brigid’s crosses were often created on 31st January.  In several areas materials may have already been blessed prior to manufacture.  St. Brigid’s Cross has a square centrepiece with four radials.  Usually made of straw, rushes, or reeds woven together in a criss – cross pattern.  Each end tied with a string, then cut so each was even. [xi]

Throughout Munster & Connacht two sticks are crossed over one another to provide a wooden framework at its centre straw.  Then woven into the shape of a diamond.  Additional woven diamonds may have been added to the four arms of the cross. [xii]

When completed the crosses were sprinkled with holy water.  A prayer may have been recited ‘May the blessing of God, Father, Son and Holy Ghost be on this Cross and on the place where it hangs and on everyone who looks on it.’ [xiii]

The traditional placement of St. Brigid’s Cross was on the inside of a thatched roof, above the front door. At the present time one may simply hang it on the inside of front door or over the doorway.  It is usual to keep the new cross for the entire year, until the next arrival of St. Brigid’s day the following year.  (Discard or burn the previous year’s cross.  [xiv]

On the feast of Imbolc: the festival of the pagan Goddess Brigid marks the beginning of spring.  People wove crosses to display on the doors or rafters of Irish homes to ward off fire or evil.  The cross was usually woven out of rushes or perhaps straw.  It consisted of a central square surrounded by four arms at right angles. [xv]

In addition to the shamrock & Celtic harp Brigid’s cross is a national symbol of Ireland.  In pre – Christian Ireland 1st February the date of the Imbolc festival: a holiday was associated with agrarianism also the beginning of spring.  The only female saint of Ireland Brigid of Kildare was born circa 450 in Leinster.  (Information from a hagiography written by the monk Cogitosus two hundred years following Brigid’s  birth)  Possibly diamonds & lozenges were Celtic symbols associated with Imbolc.  Several historians have compared the lozenge shape at the centre of the diamond cross to that of the Mexican god’s eye or the Eurasian ‘magic square.  Another popular variant is the ‘Swastika’ cross of three or four arms: with the arms set at right angles from a lozenge or diamond at the centre.  The offset angles evoked the image of a wheel in motion or may have represented the sun  or ‘the great wheel in the sky.’  In certain regions of Ulster, this wheel spinning in a circle imagery is evoked with a three – armed woven cross.  The National Museum of Ireland identified seven varieties of crosses.  Dominant variant throughout Munster & Connacht are the diamond or lozenge cross.  In Northern Ireland a three – armed variant has been compared to the triskelion. (a popular motif in Celtic imagery)  The sheaf – cross is located in eastern Co. Galway & Co. Roscommon that involves two small sheathes of unthreshed corn bound together by a split thatching branch. [xvi]

Some households left out a small piece of cloth or a ribbon on the windowsill or ‘Ribín Bríde.’  St. Brigid endowed it with curative properties to ward off illness &  pain in both humans or animals.  During year in use for healing or incorporated into clothing as protection. [xvii]

Brat Bride cloth or ribbon was left outside before dawn to collect dew then kept aside (believed to have curative powers)  The brat: a tie, belt or braces were left out also worn by men whenever they engaged in any dangerous work for protection.  The ribbon would be hung on the door so the saint would touch it or left outside.  It was particularly useful against pains i.e. headache, earache or toothache. (O’ Danaher 1972 33)  [xviii]

In the west of Ireland biddy boys carried a large straw belt called a Crios Bríde or ‘St. Brigid’s Girdle.’  People stepped through it then passed it over their bodies whilst they recited a prayer to St. Brigid for protection from illness.  Bands of men or children dressed in straw often travelled from house to house with ‘Biddy’ (an effigy of St. Brigid) were especially popular in Kerry where elaborate processions were held. [xix]

The traditional meal at St. Brigid’s Day was a supper of potatoes or freshly churned butter.  Often, colcannon was made by adding chopped cabbage.  Apple cakes or barm brack followed with tea.  The family would eat this meal together as they produced their crosses.  Within several areas it was a custom to provide St. Brigid’s Cross as a gift to those with a new home, newlyweds to wish the couple well in starting a family also for protection.  Leftover material from production of crosses may have been sprinkled on the land or incorporated into spancels or bedding for animals.  Crops were often incorporated into the crosses themselves such as a potato or a sheaf of ripe corn.  Previous years dried crosses may have been crushed then sprinkled on the land. [xx]