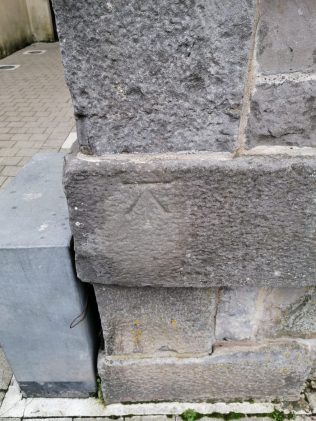 The undertaking of the first survey of Ireland by Lt.-Col. Colby with his team was the completion of the world’s first large – scale mapping of an entire country.  Initially it was a townland survey but expanded to incorporate any road, track, fence, stone wall, river, stream, house also barns.  Those were surveyed to enable Sir Richard Griffin to plot their valuation.  It was a long, complicated task.  They first had to build frameworks of trigonometrical stations to base the mapping on.  They were usually cast in concrete of fourteen ft in height by 2-ft square at base with tapering towards the top. Known as trig pillars or points the official name of which is triangulation pillar.  These points were situated to enable at least two points to be observed between stations.  The mapping was enacted by triangulation or by the creation of a series of primary triangles.  The sightings between stations were taken with the use of theodolites.  Most of the surveying was carried out nightly to reduce the distortion caused by heated air.  Lt. Col. Colby required more powerful light than was provided by his Argand lamps as sightings were over one hundred & fifty kilometres: his assistant Thomas Drummond was credited with the invention of  The limelight.  He also improved the heliostat reflector used for daylight observations.  In Andrews’s J. H. 2000 A Paper Landscape; the Ordnance Survey in nineteenth-century Ireland  Four Courts Dublin): he provided a report on the occasion)  The length of one leg of the triangle was measured to complete the network while the leg chosen was that of the shores of Lough Foyle:  this distance was known as the baseline.  The accurate measurement of the base line was crucial for the entire survey.  Again, Colby not satisfied with previous methods of measuring, requested Drummond to develop a method based on the composition principle with the use of parallel bars of two different metals i.e. iron / brass. Drummond’s design allowed the bars to be connected in the centre with steel tongues fixed across the ends that allowed them the freedom to shift according to expansion or contraction of each bar.  This allowed for the coefficient metal to be used in calculation of distance.  The measurement of the baseline of 1827 was carried out under tenting to avoid fluctuations in temperature.  The bars were mounted on tripods at a total distance of 7.89 miles that included along the river Roe: it was completed during November of 1828 that followed sixty days of measurement by a total of seventy men. [i]

The Ordnance Survey of Ireland (OSI ) was established by Lt.-Col Thomas F, Colby during 1824.  Between 1839-1843 the first levelling of Ireland was completed.  Colby’s survey was completed during 1846.  A further comprehensive survey was undertaken during 1867-1959 when the Republic of Ireland retriangulation was enacted.  During work to adjust full observation from Northern Ireland to one from the entire network was finalized.  Dates of Mayo measurements include: Nephin 1828, Tawnaghmore 1829 also Slieve More in Achill 1831. [ii]

The 1839-1843 Survey referred to a datum taken to the level of water of a spring tide observed at Poolbeg Lighthouse in Dublin Bay on the 8th April 1837 as the figures originally derived from the first levels were not rigorously adjusted.  Later in 1890 it was observed that marks that had been in use in the original survey had provided a different outcome. [iii]

Within the Republic of Ireland the Ordnance Survey of Ireland was Malin Ordnance Datum at the Portmoor Pier, Malin Head, Co. Donegal surveyed between 1960-1969.  Prior to 1970 the Poolbeg Ordinance Datum was used.  When measured on the 8th April 1937; the low water of spring tide at Poolbeg Lighthouse was about 2.7 metres lower than at Malin Head. [iv]

Several types of Benchmarks throughout Ireland include namely:

A collection of maps are held by the UCD Library that covers almost one hundred & fifty cities, towns, or villages within the Republic of Ireland.  The town plans represent all surveys undertaken of all five to ten foot to one-mile scale between 1837-1896.  Due to the large-scale detail one may view street level benchmarks etc.  The remainder were produced by enlargement of the 1/2500 maps between 1892-1911. [vi]

Benchmarks were carved or screwed symbols attached to buildings or walls prior to the GPS system.  As a  metal plate or carved stone they calculated distances plus the  height from each other.  The marks were cut by ordnance staff that provided a network of points at which their height had been measured precisely above sea level.  It was policy to provide five benchmarks per one kilometre square in rural parts or about thirty to forty in urban areas.  The name derived from the angle iron that was fitted into the horizontal cut to give a ‘bench’ or support for a levelling staff.  [vii]

These chiselled horizontal marks made by surveyors on stone structures into which an angle-iron was placed to form a ‘bench’  for a levelling rod.  The marks ensured that the levelling rods were accurately repositioned in the same place during future surveys.  The marks were indicated with a chiseled arrow beneath the horizontal line.  Frequently bronze or aluminium  discs were set in stone or concrete or on rods driven deeply into the earth to produce a stable elevation point.  The height of the benchmark was calculated to the height of nearby structures in a network that extended from a fundamental benchmark.  Sea level was usually a precise location to the vertical datum in a specific area. [viii]

A benchmark is an elegant simple crow-foot-shaped mark that is carved into stone walls in our built environment all over the country.  Created during the 1800’s to mark the height above sea level at particular locations within Ireland.  They were used by ordinance surveyors to map the terrain.  The eighteenth century façade of the Linenhall building in Linenhall Street, Castlebar, Co. Mayo is home to a beautiful surveyed benchmark.  Several benchmarks survive carved into stone on buildings, bridges, or other notable buildings in Castlebar or other Mayo towns.  Unfortunately, many have disappeared in several areas of Ireland. [ix]

The formal term was triangulation pillars, but they were also known as trig pillar or trig points. Trigpoints were usually cast concrete pillars of four feet in height with a 2 two foot – square base that tapered towards a flat top.  They had a ‘spider’ or ‘top plate’  to fix a theodolite or other device to.  Several had a flush benchmark affixed to the side with an identifying number on it. [x]

A sapper’s mark may be viewed on the gable of Errew Monastery in Ballyheane, Co. Mayo. This mark was used to measure land. The monastery closed it school in 1975 then the boys went to a local girls’ national school.  A bench mark, known as a sappers mark indicates the level above mean sea level. There is a sappers mark on the north-west corner of the monastery, on the front wall of the School also on Deasy’s bridge.  The mark resembles three points on a crow’s foot.  [xii]

History of trig points may be viewed at this link: http://www.trigpointing-ireland.org.uk/about.php?a=built

An image map of trig points with several images in Ireland feature on this site: http://www.trigpointing-ireland.org.uk/viewer2.php

Information is available at this site: http://www.trigpointing-ireland.org.uk/about.php

An interesting article with an image of Slievemore trig pillar in Achill may be viewed at this link: https://digital.ucd.ie/view/ucdlib:41449

The Lough Foyle base line may be viewed at this site: http://www.trigpointing-ireland.org.uk/about.php?a=bl

This site has information re Belfast datum: http://www.trigpointing-ireland.org.uk/about.php?a=bd

This site has several images with information for the U. K. benchmarks: https://www.ordnancesurvey.co.uk/blog/2017/09/benchmark-trig-pillar-whats-name/

[i] The History of Ordnance Survey (http://www.trigpointing-ireland.org.uk/about.php?a=history) [Assessed 10th December 2019]