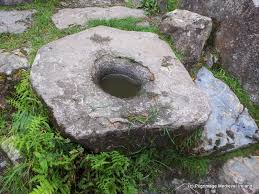 Bullaun Stones were associated with early Christian church sites within Ireland.  These have been adapted to reference a man-made hollow within a basin in a rock, boulder or a rock outcrop. (O ‘Hara Bernard  The Archaeological Heritage of Killaser, Co. Mayo 1991 pages 149–52) also Lacey Brian Archaeological Survey of Donegal 1983 (pages 307 / 8) Several theories for the function of Bullaun Stones included the following: holy water fonts, baptismal fonts, for crushing herbs for medicinal purposes, crushing grain, crushing furze for animal foodstuffs, or crushing metal for smelting. (O ‘Hara B. 1991, Lacey B. 1983)  The natural rainwater that accumulates within the basins are believed to have several curative properties.  In several areas these indentions are referred to as knee prints of local saints. (Christy Loftus Cathair na Mart Journal No. 23 pages 119-122) [i]

Several Bullaun Stones are discussed below.

The Bullaun Stone located at Cruach na Cille, Cunnagher south in Turlough is referred to as St. Patrick’s knee prints (Neary Rev. & Jennings P.)  It is a large triangular granite boulder (glacial erratic) with four circular basins carved out of its upper surface.  The boulder protrudes from the base of a dry stonewall field-fence on the south side of a small lane that runs from east to west on the northern slope of the drumlin.  It is 2.20 metres north east-south west, ninety-five centimetres north west-south east.  It is eighty metres in height.  Three of the four basins are well defined whilst the other one is much shallower.  The outer edges of all four basins encroach on each other.  Basin (A) is located on the west side of the upper surface of the granite boulder.  It is the deepest of the four with gradual sloping sides.  It is thirty centimetres in diameter & nine centimetres in depth.  Basin (B) is located within the centre of the alignment of the three boulders on the west side. It is 20.40 centimetres in diameter also 7.50 centimetres in depth.  The sides are similar to basin (A ) in that it slopes gradually to the bottom of the basin.  Basin (C) may be described as insignificant compared to the other basins.  It is twenty-three centimetres in diameter while very shallow at 2.50 cm.  Basin (D) is a large well-defined basin located at the east side of basin B.  It is thirty – two centimetres in diameter.  This basin is the largest of the four at four to six centimetres in depth.  The broad diameter has very gradual sloping sides.  Images by Christy Loftus feature in this article.  [ii]

Bullaun stones are widespread throughout Ireland. Believed these were meant as holy water  vessels as curative uses or as offerings for various gods.  Another use was for grinding of ore or grains. Often rounded stones or rocks were placed within the hollows, they would have been used as prayer stones when pilgrims turned them in a clockwise direction while at prayer.  Several bullaun stones related to local saints, where foot, finger, hands or knee, marks were incised on the stone.  Several small stones had crosses inscribed on them.  At Killinagh in Co. Cavan a large boulder near a well has nine bullaun stones with small round stones in each hollow. [iii]

At the early Christian monastic site founded by St. Kevin at Glendalough in Co. Wicklow  are several interesting bullaun stones with possibly over forty other stones within the Valley.  One of the stones is known as ‘the deerstone.’  Discovery map 56: T123968. (Jim Dempsey July 2018 ) [iv]

This site has a sketch from an ordnance map of stones also ‘The Deer Stone‘: https://pilgrimagemedievalireland.com/tag/bullaun-stone-2/

Bullaun Stones were discovered at ecclesiastical sites within Ireland.  Irish for Bullaun is Bullán a ‘bowl or water container.’   These stones frequently held quartz fragments of smooth rounded pebbles perhaps incised with a cross that were turned around each time a pilgrim visited a pattern or procession.  At certain areas the hollowed-out stones filled with rainwater so like Holy Wells were regarded as blessed sites for cures or blessings.  This link has a sketch by W. F. Wakeman from 1875.  Several bullaun stones & their sites are referenced i.e. Maulinward, an ancient West Cork burial ground, St. Gobnits’s in Ballyvourney, outside the Church at Cill Lachtain in Co. Cork where one is mounted to the church wall as a holy water vessel, Timoleague  Friary Stone was revered for its cure of warts.  The Bullaun Stone at Kilmalkedan in Co. Kerry has multiple ‘basins’ carved into a large earth fast boulder isolated in the centre of a field.  The unusual bullaun stone known as ‘The Rolls of Butte’  also is featured in article. (Robert July 2019 ) [v]

This site has images & explanation of Native Americans use of grinding stones: https://oldeuropeanculture.blogspot.com/2014/12/bullaun-stones.html

This site has information re Bullaun Stone as ‘Keelers or na Beirti.’  In her publication Letters from the Kingdom of Kerry: in the year 1845  Leadbeater Mary Jane refers to topic: https://pilgrimagemedievalireland.com/category/bullaun-stone/